Just like the the combatants, I am determined to finish this to the bitter end.

The Union are only able to blockade Charleston, so the Confederates get 6 import supply.  They carry forward 110 and receive 60 from their remaining two major cities (New Orleans and Atlanta).  Towns and other cities gets them just 24.  Total 200.  That is plenty for 10 personnel points, but I've also determined that the Confederates need to be building fortresses as the Union naval power will be able to deal with forts with ease (i.e. they can muster enough strength to attack on the 900+ Column and do not have to worry about losses).

The Union are carrying forward 562 supply and get 250 from major cities.  Liberated cities gives them a further 63 from free towns and cities.  An embarrassing total of 875.  Some enterprising Northerners are suggesting that they should be allowed to trade with the South.

The Union are finally able to launch one of their new Ironclads in St Louis.  The other one will definitely be finished next month.  It turns out the contractor was trying to sell them to a competitor.  A 10,000 strong division goes to Bowling Green.  Another one goes to Baltimore along with a railroad repair unit.  A 3,000 strong division is posted to Washington.  1,000 militia are raised in each of Kentucky and Missouri.  Hancock arrives in Washington and is given command of Pope's corps.

The Confederates receive 7,000 sorely needed militia that are returning to the cause.  There are 8,000 garrison troops that are distributed as follows: New Orleans 3,000 and Atlanta 5,000.  Partisans appear in Tennessee.  Walker and Ewell are promoted to Corps commanders.

The Confederates use 26 supply and 9 rail supplying their dwindling armies.  They are left with 154 supply, 21 rail.  50 supply is spent building a fort at Grand Gulf, MS.

The Union consume 54 supply using 18 rail.  They are left with 766 supply after they top up their existing depots.

The Union start with the 6 free chit.

The new division is railed from Bowling Green to Skyes to continue the Atlanta bloodbath.

The new ironclad starts sailing down the Mississippi.

Heintzelman is ordered across the Nottoway River.

Franklin is ordered to join Thomas.

The new railroad repair unit is sent to Norfolk to reestablish rail transport from that location.

Sumner is sent off to deal with the partisans.

Reynolds advances to the Pearl River.

Rosencrans misses his opportunity to get the rebel militia that is blocking his way.  Halleck is no help.

Sickles advances to the outskirts of Bristol.

Rosencrans wriggles back across the Satilla River.

Porter attacks fort Sumter and obliterates the garrison.  This has been something I keep forgetting to do.  The Confederates would have been safe outside or better if they had upgraded to a fortress (they couldn't as there were no regular infantry units to provide the necessary engineers). This will only be a true success if the Union can follow up.

The Confederates are bleeding to death, but they are determined to make the Yankee's pay for their aggression.

5,000 men are rushed to fight Sherman, despite being served extra rashers of bacon for breakfast, 1,000 desert on the way.

Hardee is sent south with a 1,000 men to Natchez while Johnson takes over the garrison of Fort Grand Cliff.

Ewell sends 5,000 garrison troops to reinforce the fort at the mouth of the Mississippi.  He notes there are some regulars there and orders the engineers to start looking at plans to upgrade the fort to a fortress.

The militia facing Rosencrans are pulled back to the Altamaha River.

The Partisans raid Pulaski, threatening Sherman's supply lines!!!  Now the importance of Eastern Tennessee becomes obvious.  I also have to remember it is three movement points in rough terrain, not two for infantry (four for cavalry).  The presence of a railway line does not negate this (which is a bit odd).

A degree of glumness settles on the Confederates.  The Roanoke line is looking very thin, as is the Mississippi.  Atlanta is at risk as Georgia is being overrun.    Luckily there are 7,000 militia to deploy.

2,000 militia go to defend the Altamaha River line in Georgia.

1,000 militia go to Plymouth, NC to protect the most eastern part of the Roanoke River line.

The remaining 2,000 militia are needed in Atlanta (only 2,000 militia can be called up per state per week - a Governor can only sign so many commission papers). 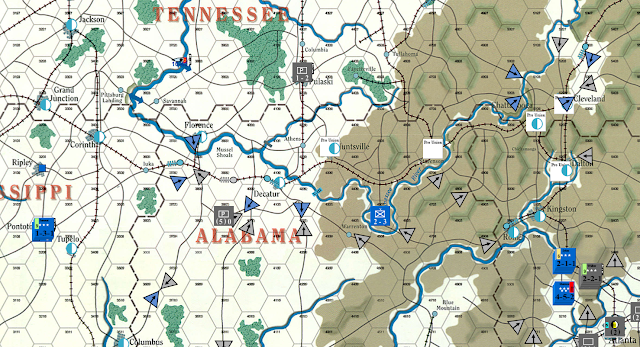 The Union get the 4 chit.  The Confederates get a double move.

The partisans have a free hand and cut the railroad and then head after the next line supplying Sherman.

Price returns to Raleigh, but orders the bridges and railway destroyed at Weldon and Gaston.

A slight redistribution of militia on the Altamaha line occurs, but everything else is pretty stable.

Taylor and Hindman destroy their bridges on the Roanoke line.

The Union High Command tells Sickles that capturing Bristol is urgent and that he then needs to secure the rail line all the way back to Chattanooga.  McClellan claims that he conquered Tennessee.

The brigade that was languishing on the Tennessee River is rushed to Tullahoma.

Sumner reaches the Tennessee, but it will be a few weeks before he can catch the partisans.

Hancock and 10,000 men sail to Norfolk, but it is possibly only a staging post.

Granger displays initiative to keep on moving and arrives at the banks of the Roanoke.

Meade sends 1,000 men from the Washington garrison to take over as the Stanton garrison.

Couch makes a march attack on Forrest.  Both sides lose a 1,000 men.  Couch is wounded.

The Union get the 4 free initiative chit again.

The partisans descend on Fayetteville, TN, but cause little havoc.

In the west Jackson wonders when he will need to pull back.  He and Forrest decide to hang on a little longer.

The same goes for Atlanta, but Walker knows he has no choice.

The Roanoke front is getting very thin.  Hindman sends 2,000 men to reinforce Taylor.

The Union get word to Halleck to go and rendezvous with Rosecrans (if he can meet up, Rosecrans will be freed from the limitations of naval transport).

Sumner is hurried along to get to grips with the partisans.

McDowell is ordered up to the Tennessee with the railroad repair unit.

Hancock is ordered to sail for New Bern and to take a railroad repair unit with him.

No other initiative is shown in the east.

Around Atlanta Sherman is happy with his position.

Ord realises he needs to go to Paducah where transports are waiting for him.

Farragut, now he has the new ironclad, bombards Vicksburg.  A 1,000 defenders perish.

Hancock does a wriggle across the Neuse River.

There are no other attacks in the East.

The Union draw the 7 chit.

McDowell repairs part of the railway near Decatur, AL.

Buell is activated and shuffles troops about so Lyon can keep up the pressure on Jackson.

Halleck meets up with Rosencrans.

McClellan is ordered back to the Roanoke.  He tells anybody that will listen that he will crack the Roanoke line as soon as he gets there.

1,000 men are sent from Stanton to reinforce McClernand.

McPherson, sensing victory performs a march attack on what is left of the Confederates before him.  Both sides lose 1,000 men, but McPherson loses his life.

Heintzelman has the initiative to head over to McPherson's command and pay his respects.

Hancock repairs the railhead at New Berne and proceeds to the Tar River, throwing out a brigade to cut the railway at Rocky Mountain.

Lyon keeps up the pressure on Jackson, attacking on the 161-200 Column of CRT 4.  Both sides lose 3,000 men and Jackson has to retreat.  Forrest is now somewhat trapped in Jackson.

Sherman doesn't attack, but Sedgewick does.  He attacks on the 111-130 Column of CRT 3.  Both sides lose 2,000 men.  Taylor has a lucky escape when a bullet with his name on it hits his belt buckle and is deflected harmlessly away.

There are no other attacks.

The Confederates send reinforcements to Walker.

Forrest flees across the Pearl River.

Johnston sends all the troops he can spare to Jackson and then moves off south.

Smith is told to send Wheeler to Atlanta and to then pull back to Dalton where he will meet up with Hindman.

Beauregard decides to pull the Army of the Atlantic, all 33,000 men, back and go and meet Hancock.

The Roanoke Line is no more. 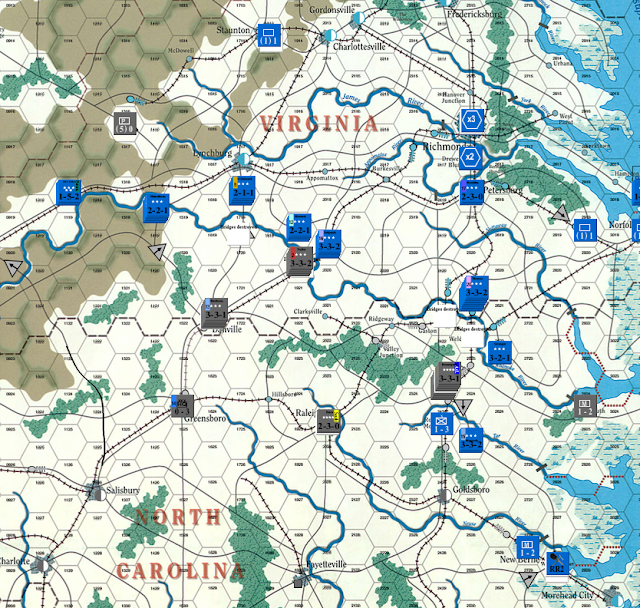 Collapse in the East. 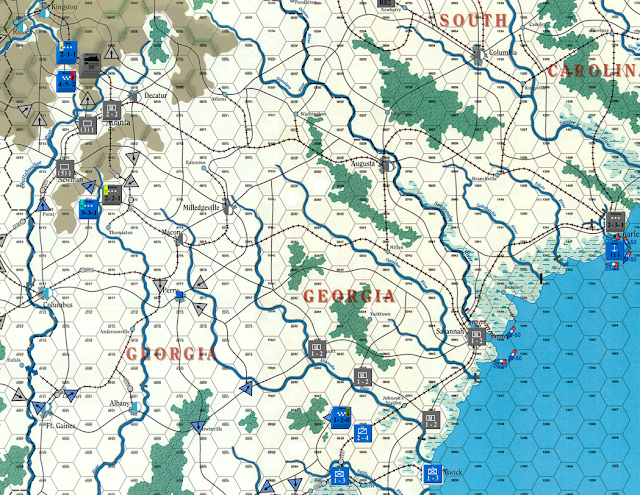 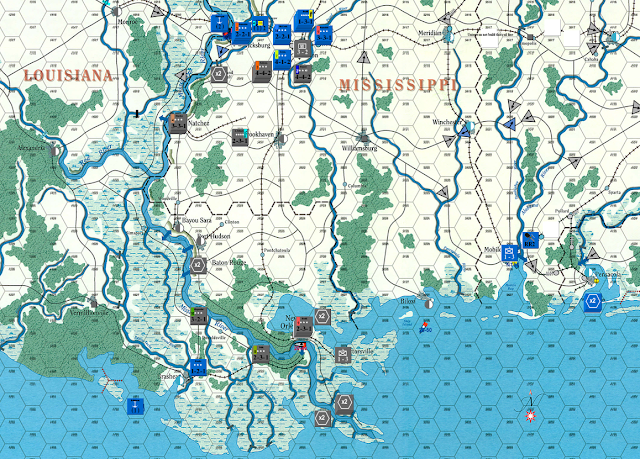 The run of the Mississippi.