I’ve had these Essex Austrians for some time.  The person who I got them from had thought they could be converted to be the Prussian IR 29 formed from the Berg regiment who were dressed in white uniforms with light blue facings.  It just so happened that the Austrian IR 29 also had light blue facings.


From the previous attempt to paint Austrian white uniforms I knew it could be a challenge.  This time I started to experiment with different basecoats.  However after just a few figures I decided it was best to paint the figure totally black and then use grey as the base for the uniform.  The reason was that grey was hard to see on the base metal.

Almost finished.  I love how figures come alive as the paint goes on.

At over one thousand points each side, this fictitious battle with Austrians and Russians against the French in 1809 was perhaps a trifle too ambitious to be fully played out in the limited time available.


However the pleasure of deploying all the superb figures in Richard’s collection was a joy in itself. 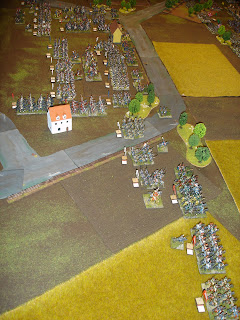 This picture shows the French deployment from their right.  The French intention was to launch an attack from this position and then hit the centre while delaying on the left. 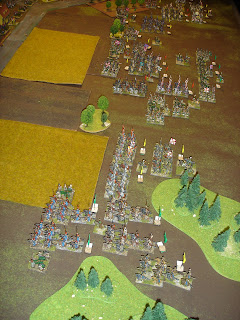 The second picture shows the Russians deployed against the French right.  The battle opened with a possibly hasty cavalry charge by the Russians and the French were only too happy to participate.  There was a bloody battle between French Carabineers and Russian Guard  Cavalry - a tie roll with each side having positive factors saw them both taking heavy losses and pulling back.  The French did have a successful charge by a brigade of Polish Hussars lead by Poniatowski , that roughed up a good deal of the Russians. 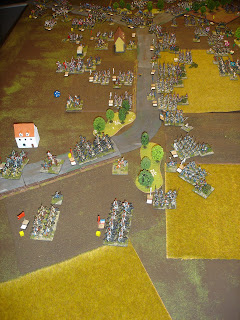 The third picture shows the French right after two hours of fighting.  The action had shifted to the centre where the French had slowly rolled forward to be suddenly hit by a Russian pre-emptive attack.  The Russians had been repulsed, but not without some help from the Old Guard. 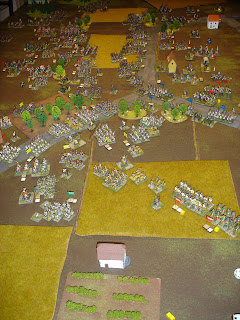 The final picture is from the French left and shows the Austrians attacking.  There had been some deadly fire from the French artillery and their two brigades of light infantry that were holding the small woods, having deployed into line, had beaten off the first of what was to be expected to be many Austrian mass attacks.
Posted by Sun of York at 8:14 PM No comments: