I took the allies and Richard took the axis side in this boardgame which took us some twenty hours or so to complete in about four or five sessions, not counting set up which Richard did.


After playing the boardgame solo last year, I took the position that the allies could not hold the island and made plans to evacuate from very early on.  Perhaps I could have done more at Maleme, but felt constrained by the need to hold back the Suda force.  At Retimo we wiped out the paratroops and we put up a hard fight at Heraklion, before withdrawing across the length of the island to Sfakia where the rest of the army gathered to withdraw.


I was about a day ahead of schedule.  The Royal Navy had done some excellent shore bombardment supporting the defence of the airfields and also intercepted some German convoys before they caught the attention of the Luftwaffe.  It was tricky going and a number of destroyers were lost and many ships ran out of ammo.


Finally it came time to embark and the main Task Force with the transports had done well to position itself, but the Luftwaffe found them and did dreadful damage, sinking them all bar one which was left damaged.  Luckily there was enough capacity on the remaining destroyers and cruisers to pick up the army and get them to safety.


A final dash was made for the remaining troops and while the Luftwaffe put everything into it.  However, the arrival of additional capital ships including an aircraft carrier and the fact that the Royal Navy was acting in waters that the RAF could at least provide some air cover meant they were unsuccessful (as well Richard threw a series of tens which meant fleets went undetected, attacks were uncoordinated and the few planes that got through missed their targets).  Only two companies of infantry were left behind and they took to the mountains.


In the end, it was the loss of the transports that gave the Germans their substantive victory.  The loss amongst the paratroops had been very high.
Posted by Sun of York at 10:29 AM No comments:

I can’t recall the brand, but these chaps are destined for Crete.  The hatches were fiddly, and the commander and his open hatches have been well coated with PVA glue over the top of the initial super glue I used.  I am also trying out the nail board technique for mounting the models while I paint them.  Easy for the turrets, but the hulls are a bit heavy and I also wish I had used bigger nails to give me something more to hold on to.


The base coat is Tamiya Flat Brown XF10, the same as I use on my Australians (which these tanks will be supporting).


These models are my first attempt at 15mm AFVs. 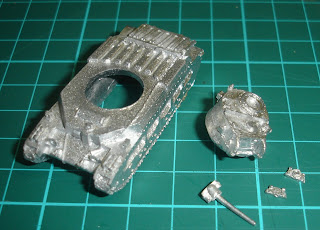 Finished!  Well, one packet anyhow.  I agonised over how to base them and finally settled on FOW medium sized stands of four figures and FOW small sized stands for pairs and singles.  The singles I want as platoon commanders for Crossfire.


The next decision was what scenic material to use.  I ended up using premixed plaster of the type I use when doing odd jobs around the house.  It worked really well and took the Tamiya Flat Earth XF52 paint easily.  I then used watered down PVA glue and sprinkled sand over it.  Next I did a patchy dry brush of Vallejo Stone Grey and finally a sparse sprinkle of some yellowish flock before adding the odd bit of scrub.


Based, but before sand applied: 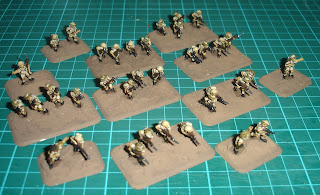 And now ready for action: 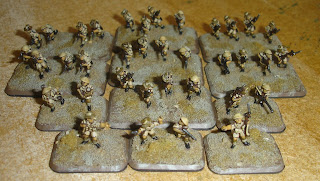 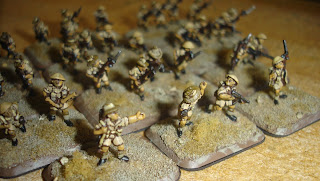 So much for this being a Xmas project, unless I count it as Xmas in July, but I have now finished the ten strips of fences I made from the Peco kit.


The assembled fences were given a base coat of Tamiya Flat Brown XF10 after I had apples a layer of PVA glue to the base and sprinkled on sand to give it some body.  On the base I then painted Tamiya Flat Earth XF52 and on the fence itself I dry brushed Vallejo Stone Grey VJxxx.  Watered down PVA glue was then applied to the base and my standard mix of flock sprinkled on.  I wanted a more clumped look and tried to do a second application on one segment, but gave up in favour of applying some bids of random shrubbery. 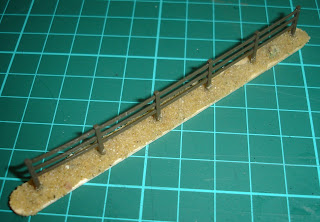 Painted and ready to flock: 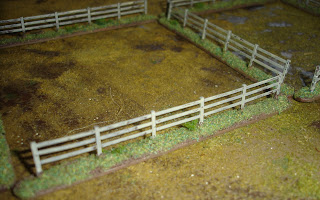 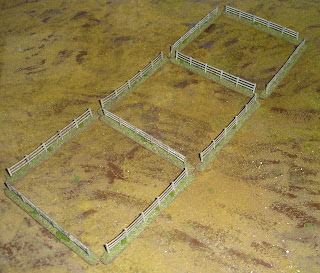 This last photo reminds me of playing the boardgame Agricola.

http://en.wikipedia.org/wiki/Agricola_(board_game) All I am missing is the sheep or cattle, which reminds me, I need to make some ploughed fields and similar terrain pieces.
Posted by Sun of York at 9:55 AM No comments:

These are old and I found them loose in a box of WW2 figures and decided they deserved basing.
I recall carefully cutting away the front legs of the machine gun and for some reason I had to reconstruct one of the gunners.

Last year I bought a bag of Battle Honors 15mm Prussian Line Infantry Marching (BPR02) which turned out to be enough to do three units for Napoleon’s Battles.  I cleaned them up within a few days of purchase and was dismayed that some had lost their bayonets.  Never mind, I decided these should be the ones I painted first.


I wanted to do a reserve regiment and settled on the 2nd Brandenburg which was ultimately brought on to the line as regiment number 12.  Apparently they wore a bit of a variety of uniform and equipment, but at least a good proportion had been outfitted from the 1st Brandenburg depot as well as captured French equipment (well, that’s my story, even down to the inspiration for the flag).
I am pleased with the result.  The photos have lightened the blue of the uniform somewhat, but the colour is actually a much darker Prussian blue, as you would expect.
First, two pictures prior to basing and varnishing. 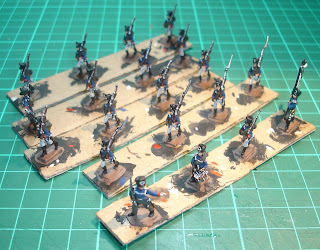 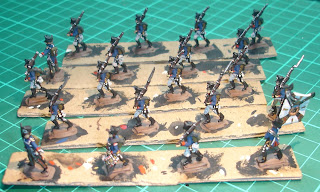 And finally the finished deal, in column, line and march column ready for their Napoleon's Battles encounter. 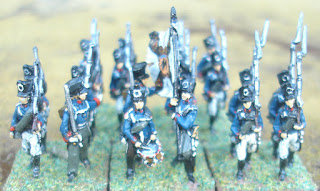 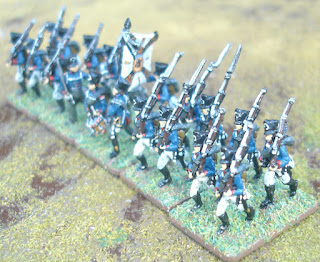 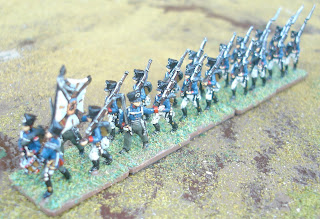 The last three photos were taken in natural light.  The officer in the third rank in the last picture is saying that the flock is greener on the other side of the board.