Although I’ve had the rules for a few years and been an Ancients players for decades (6th and 7th Edition plus DBA) it was only yesterday that I had the chance to get my Greeks out and fight Richard’s Persians using Field of Glory ancient wargame rules.


I hadn’t completed reading the rules (probably only a quarter of the way in) and Richard hadn’t played them recently so it was interesting to see the rule book used to the fullest degree.  I would have to say I was very impressed and we were able to work out nearly everything without too much trouble, however I am now reading them in detail.


The game opened well and my Classical Greeks (all 600 points of them) marched into battle in three lines. 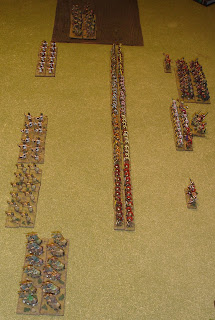 Once the skirmishing had been resolved, my central Hoplites came to grips with the Persian Immortals and broke them without too much trouble.  Game over ... or so I thought. 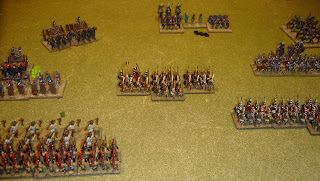 Mopping up on the right met with disaster, the general in command dying in the fighting.  Total collapse on that flank. 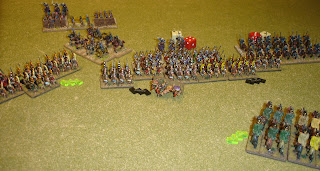 Then in the centre and left, despite some real desperate fighting, the general there too died an heroic death and all remaining Greeks broke and fled.  This left only some of the skirmishes to cover the rout.  True to their name, the Persian Immortals rallied and came back to claim victory. 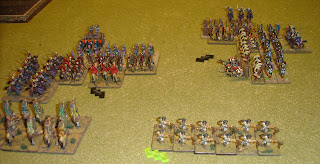 For a first game it was incredibly successful and compared to my experiences with other rules, had all I liked about them without the negatives – it felt like a battle.
The Greek miniatures are from my Tin Soldier collection.
Posted by Sun of York at 3:06 PM 2 comments: