On 17 August we played the Leipzig Table D scenario, the next in the sequence for the Battle of Nations.  Both sides march on, although the allies have the upper hand in being deployed and closest to the two victory locations: Gross Possna and Klomberg Hill. 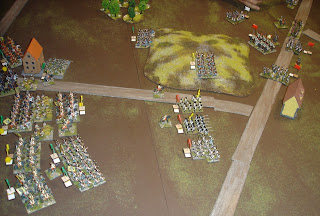 By the 10:00 turn the allies (Austrians in this case) had moved through Gross Posna (orange roofed building with the unit of jagers in the top left hand corner) and had pushed on to the hill (the two brigades of Grenz).  The cavalry is on react ready to move up as well. I had unlimbered the artillery too early and was busy force marching it up (the first time I had used this optional rule), but it was hard work keeping it in command.  The Austrian 2nd Division (denoted by the red marker flags) is covering the right and moving up on Srippertshayn as a brigade of French veteran Light Infantry are about to occupy it. 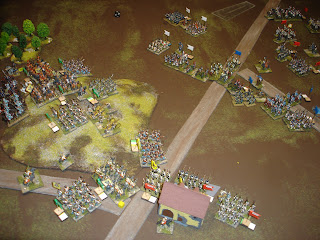 By 12:00 the Austrians were all over Klomberg Hill.   The French were at a disadvantage as their cavalry was still coming up, although their 12pdrs were more than a match of the Austrian 6pdrs. 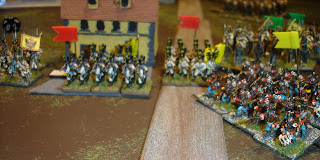 The Austrians in Srippertshayn as seen from the French lines.  Sadly I didn’t get the focus right on the unit I wanted, being one of my two Austrian infantry units I had bought along for the game (easily spotted by the cast flags which have been hand painted).  These are Essex.  All the other figures are Old Glory form Richard’s collection, with the exception of the Prussians which are ABs and mine.


The Austrians launched one attack from the hill as the French were getting ready to attack.  When their attack did go in they were met by the Prussians and a cataclysmic die roll out come of 10 to 1, not in their favour.  A that point we called it quits.
We were not using free rolls, and as the French would have had a maximum of only two for the game, they would have probably already been used by this stage of the game.
Posted by Sun of York at 9:06 AM No comments:

I started these in the 1970s with one of the light infantry just to see how it would go.  The conversion was mainly just some carving and them painting.  The plume was a pin thickened up with some nail polish hardener.


I liked the result so much that I ended up completing the whole unit, the grenadiers coming from the AWI British Grenadiers set.


A recent post in the Napoleon’s Battles Yahoo Group touched on these types of conversions.  I have a few more I should get out and photograph for posterity. 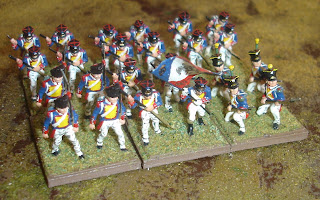 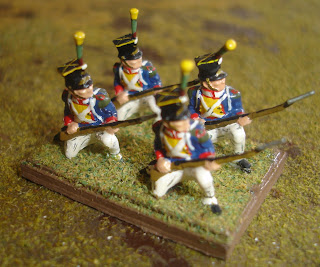 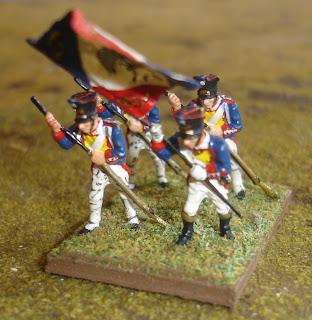 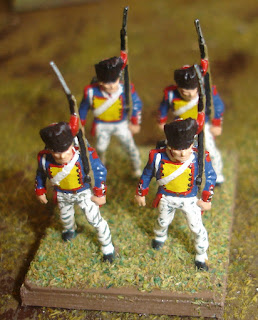 Well, these were a long time coming, but finished now.  All being well they will see action this Friday, not as 16PrLWC, but standing in as 12PrLC.  I figure they pass fairly closely for Uhlans. 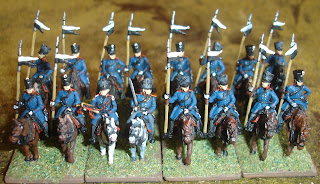 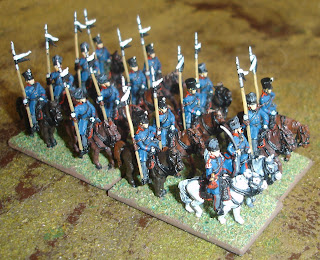 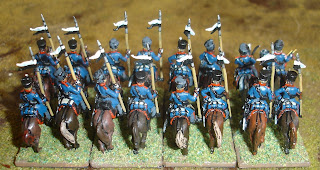 Song of Drums and Shakos

Last night I played my first two games of Napoleonic skirmish using the rules Song of Drums and Shakos (SDS) - most enjoyable for a quick, easy, no fuss game.


In the first game I didn’t really know what I was doing and hid my guys behind trees.  My activation rolls were poor eerily paralleling my own indecision.   After losing a few men I finally got into line and started to get my act together.  Some good shooting found my British Lights restoring the kill ratio and going on to win.  In the next game I kept a tight formation and stayed put, using volley fire to take out the advancing French.  It was a close run thing as I was losing guys almost as fast as the enemy, but in the end, luck prevailed.


Thanks to Adam for the Perth Miniatures Gamers Group for providing the opportunity.


The other bit of magic, having decided to take up the offer of a game I thought I better do a bit of research.  I was able to get the rules via iTunes and have a read before the game.  Now all I have to do is find where iTunes has hidden the actual document so I can print out the quick reference sheet.  One stupid thing was iTunes made me click agree to some 38 pages of legal nonsense before it would let me purchase the $6.99 book which is, in its hard copy form, around 38 pages.


Another good thing was Adam’s figures were from Victrix and so now I know what to do with mine – paint them up for Napoleonic skirmish using SDS (along with all those odds and sods 25mm Minifig and Hinchcliffe figures from the previous century.)
Posted by Sun of York at 9:12 AM No comments:

Email ThisBlogThis!Share to TwitterShare to FacebookShare to Pinterest
Labels: Song of Drums and Shakos

I got these after reading Stephen Ambrose’s book Citizen Soldiers.  I never got around to finishing their basing as I couldn’t decide how snowy I wanted to make them, or if I should just go with mud.  They are based for Crossfire and represent Company L, 394th Infantry, 99th Division which was commanded by Captain Neil Brown in December 1944..
To give the figures their full name from the manufacturer, Revell: 1/72 US Infantry Ardennes WWII Plastic Model Kit
Another unit looking for a home. 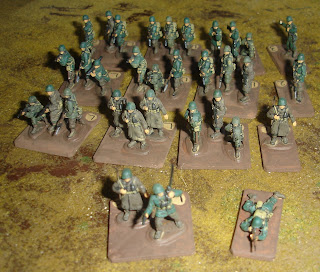 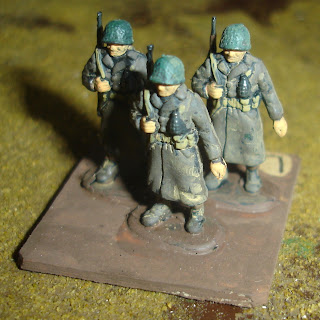 These for me will always be the “new” figures.  They were much larger than their predecessors and possibly better sculpted etc, but they never had the charm of the old figures.  I did like the officer figure.


These had a very simple paint job.  What makes them ok is the varnish i used which was some kind of wooden window frame varnish they gave a slight brown tinge as well as being very durable (I think – these guys have never seen action).


They are based for Crossfire.  Perhaps they will find a home one day? 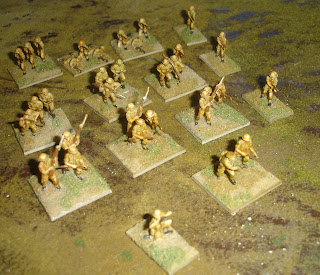 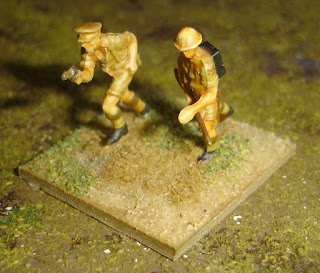 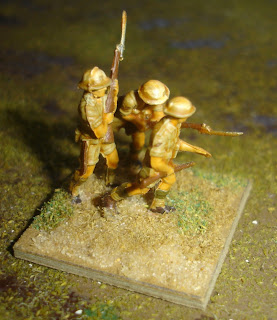