Using the Napoleon’s Battles rules and scenario Richard and I refought this battle yesterday.  We took an hour or two the previous night to set up the table and sort out the troops.  Play commenced at 1pm and by 6pm we had an outcome.  We had played eight turns which was four hours in game time.

I was the French and I made sure to bring up the reserves immediately, even it meant the Italians on my far left flank languished for a turn or two.  With all the troops now moving forward, it was rare that there were any French command problems.  The Austrians however couldn’t maintain their whole front in command.  Not such an issue while the attack was developing, but a serious handicap once the engagement was across the whole front.

The first picture is after the French first turn and already the head of the Italian Guard can be seen on the road behind Prince Eugene while the division of Dragoons moves up on their right. 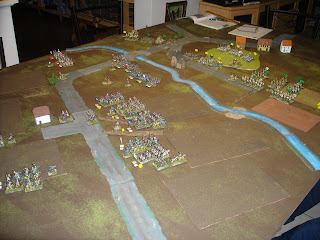 The first attacks occurred to the north of Kis-Megyer and were beaten off by the Austrians without too much trouble.  This is the situation depicted in the second picture which occurs after about four turns of play 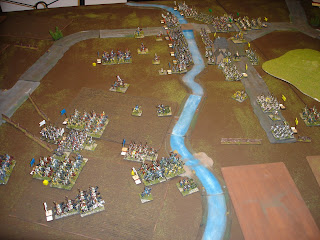 The main assault on Kis-Megyer was also repulsed as were the initial probes across the ford by the French cavalry. 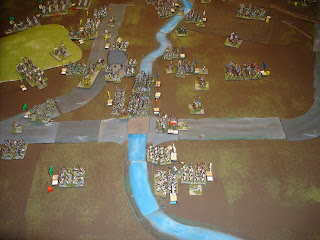 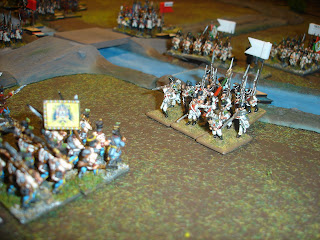 The Italian brigade in the above picture are actually my figures, all the other ones are part of Richard's collection.  The Italians were the first 15mm Napoleonics I painted.


However weight of numbers and quality of troops started to tell and while the second French assault north of Kis-Megyer was again repulsed, the French cavalry obtained a bridge head. 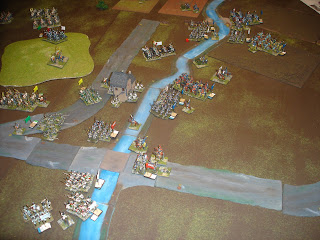 A third assault by the Italians was successful and in the centre the French began to mass fire against Kis-Megyer.  It was then that a series of very successful French cavalry charges occurred as they broke out from the bridgehead and in a short time the Austrian army’s moral broke, their grenadiers narrowly escaping from being surrounded.  The Austrians still held Kis-Megyer, but it was becoming a killing ground for them.

In the last photo above, the cavalry on the hill are French staring down on Archduke John.


The Austrians had five brigades dispersed and five routed (and being ridden down by French cavalry) while the French had two brigades dispersed and one routed.
If I was to refight the battle again, I would add in a requirement for the French cavalry to search for the ford.  One method would be to place six chits on the stream in the general area of the real ford, one being the actual ford, the others dummies.  The French cavalry would have to contact the chit and role under their response number to complete the search.  Only the Austrians would know and they could choose to defend and possibly betray the ford's location or even defend in another place hoping to deceive the French.
Posted by Sun of York at 10:18 PM No comments:

Painting finished.  I’m pretty happy with how they look, but I love how they finally come alive in this sequence of pictures. 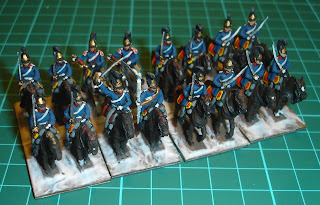 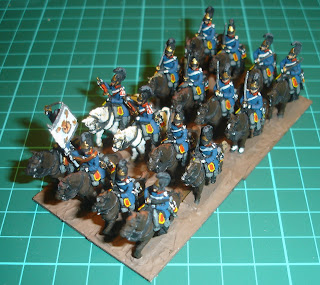 Some time in the late 1980s I took this photo of a Napoleonic game in 25mm.  Must have been with Myron as I recognise the flag on his Spanish troops in the shadow on the bottom left.  I wonder what rules we were using?  Probably WRG.  I used to like Bruce Quarrie’s set that was published by Airfix.  Then I moved Empire 3 before finding Napoleon’s Battles and being happy ever since.
I have fond memories of that house in the middle of the table and still have it and the trees. 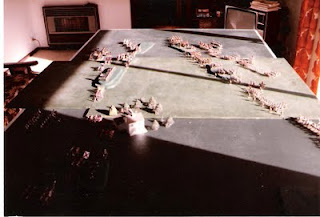 Email ThisBlogThis!Share to TwitterShare to FacebookShare to Pinterest
Labels: Napoleonic

My friend Norman sent me these two pictures of his 6mm, or is it 5 mm – hard to tell in this scale, ACW figures.  Probably late 1980s.  The interesting thing is that the terrain is made from sculptured loam – yes soil.  Sprinkled with flock and a few trees stuck in, makes a big difference to the table tennis table I was using. 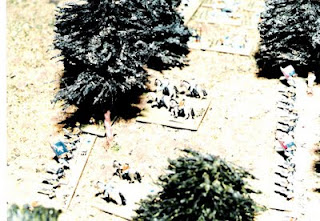 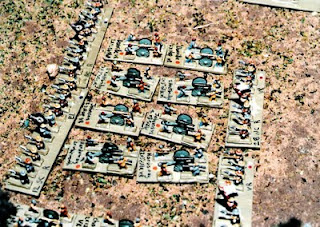 In going through my old photo albums I have a number of gems to get out here.
This one I’m pretty sure is of a WRG Ancients game from the mid 1980s. At a guess it was with Myron and his 25mm figures, maybe a few of mine.  It is my house as I recognise the lime green walls (shudder) and the pictures on the walls – line drawings from the Funcken books as well as a copy of the map for the SPI boardgame Wagram.

As for the terrain - half a table tennis table, polystrene hills (in a at least a matching green), some bushes and big white pebbles.  The pebbles added weight to the hills. 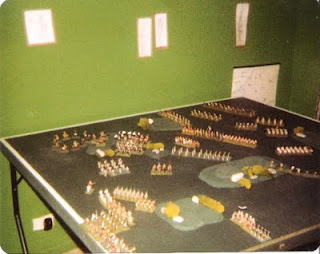 Black and white photos taken in the back garden sometime around 1970.  The oil tanker and the aircraft carrier are long gone, but I still have the row boat from the Golden Hind plus I bought the kit again to have another go at doing it.  I remember I had just about finished and had it sitting on a tall chest of drawers.  The dog went made barking at something and crashed into the furniture and the sailing ship launched itself into the air.  Devastating.  It is a Revell model. 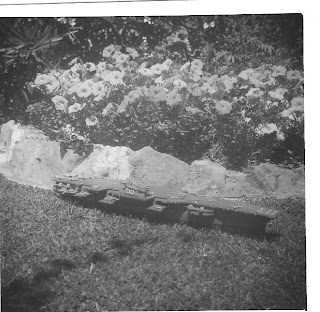 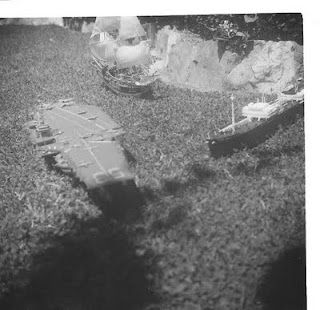 These pictures (and there are a few more golden oldies to come) were lost in a bulky photo album, so getting them out here tells their story and also allows me to get them onto my iPad so they can be seen.  I can then dispose of the photo album and get back some much needed space.
Posted by Sun of York at 9:44 PM No comments:

Email ThisBlogThis!Share to TwitterShare to FacebookShare to Pinterest
Labels: Revell

I had an opportunity to play a game using Flames of War.  I seen games played and had been impressed by the miniatures, but the actual deployments never quiet looked right – too much base to base.
The game was enjoyable as we had an umpire which therefore allowed for some hidden deployment and both sides were not that familiar with the rules, but certainly knew wargaming and the period.  As a result we had a few times when we were effectively shaking our heads over the mechanics of the rules, but still having fun.
A squad level game that uses mechanics that feel more like something else.
Great figures.
Posted by Sun of York at 9:00 PM 1 comment: