Based for Fire and Fury but I never expect them to be used.  I just did it to get them out of the way.  I showed them off as I was rather pleased with them (the Airfix ACW range along with the Wild West sets were always a good set of figures, nice and consistent)  plus for the oddity factor.  Unfortunately some helpful chap gave me a big bag of Airfix ACW figures thinking I wanted more.  Not fair!  That is someone else's plastic mountain. 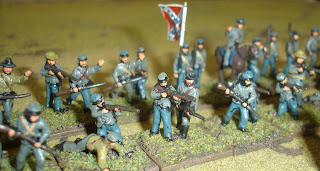 Ooh it took me a long time to finish this chap, but I'm very happy with the result. 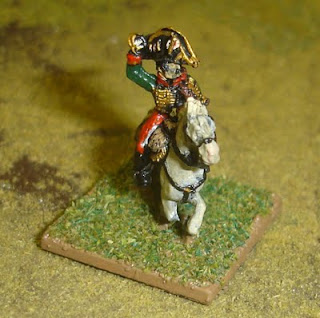 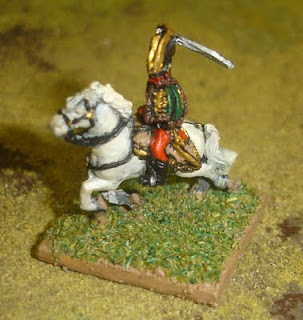 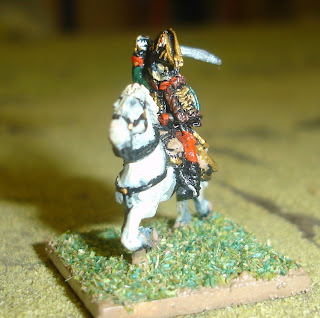 From memory this figure was from an Old Glory French Marshalls set.
Posted by Sun of York at 6:50 PM No comments:

This came with a job lot of painted 15mm ACW figures.  It was a bit worse for wear so I set myself a goal to restore it.  The canvas was taken apart and reset and the overall paint work tarted up.  A driver was added and the whole lot rebased ready to add some novelty to my next Fire and Fury game. 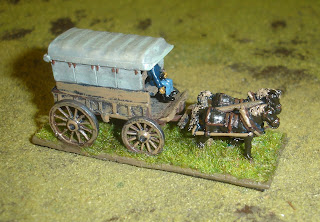 Thanks to the Internet I was able to work out that this wagon was an ambulance called a "rucker".  Here is a link to more information than you could ever hope for about ACW ambulances: http://www.civilwarhome.com/ambulancewagons.htm.

It was the "most serviceable ambulance wagon used during the latter part of the war ... designed by Brigadier General D. H. Rucker, and built at the Government repair shops at Washington."

I don't know the manufacturer of this model (yet).

It is possible that the canvas should be glossy black representing oil cloth or rubberised canvas.  The wood could possibly be a bit more green.  All I know is that it is now a serviceable model for the miniature battlefield rescued from the bits box (as distinct to coming off the lead mountain).

Email ThisBlogThis!Share to TwitterShare to FacebookShare to Pinterest
Labels: ACW

This is a project I have now commenced.  It has been an idea for a while, but I’m now taking action.  It is mostly rebasing figures that were set up for Command Decision and turning them into a representation of Tyne and Tees for Megablitz.
Why did I choose the 50th?  Well, it saw some action, it contained units that my dad had mentioned – The Green Howards (Alexandra, Princess of Wale’s Own Yorkshire Regiment) (and in which his dad had served during WW1) and I was born within a mile or two of the river Tees.
The force is not going to be pure Megablitz as it will easily double up for Crossfire and I have decided to base on 30mm squares and multiples thereof.  This also makes them slightly compatible with FOW (not that that is important to me).
More importantly it will allow me a construct in which to build the rear echelon troops, including theatre units like an airfield and hospital.

The figures are Matchbox British Infantry with some Airfix add-ins from various sets.  I particularly like the Commanding Officer (although he was a bugger to photograph). 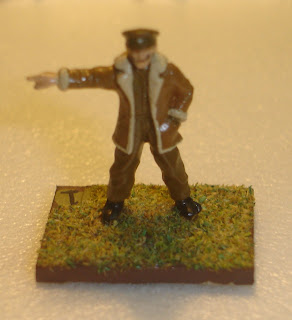 What to do with old Airfix 8th Army figures?
I have a heap dating from the 1970s when I constructed at least four 33 figure companies for gaming purposes (I think using Mal Wright’s Battleground rules which might be a uniquely South Australian thing).
The British 8th Army always held a special appeal as my dad served in North Africa.
Anyway, I came across this lot that I had rebased and formed up as D Company for Crossfire.  So it was time to deploy them in the garden for a photo shoot (the sandy ground making a good setting). 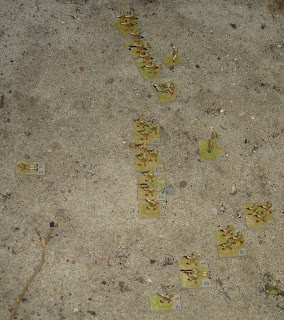 I had the second and third platoons depicted with figures busy firing their assorted weapons, but I had kept one of my favourite figure poses for the first platoon, here lead by an intrepid grenade thrower.  This advancing pose must have been very popular as Minifigs appropriated it for many of their Napoleonic figures (although I don’t know which came first, but my money is on Airfix). 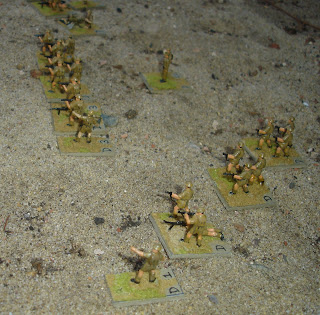 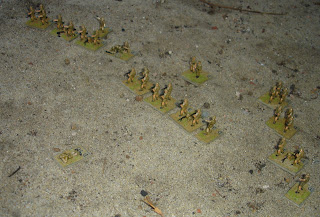 The Commanding Officer is a ring in from the Airfix Bristol Bloodhound rocket set.  He is accompanied by a slightly modified minesweeper figure.  Note also the home made PIAT in the top left hand corner.  The very useful figure (how many of those did I modify to crew various weapons over the years?) is secured in some Araldite adhesive which was my repair technique before I discovered Super Glue and then PVA glue. 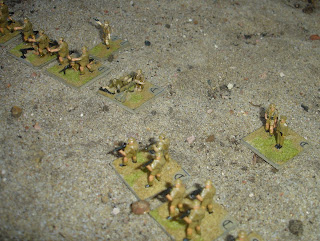