I did these a long time ago.  The inspiration came from the wonderful Armies of the Peninsular Wars book (which can be found in my bookshelf that should be at the bottom of the page - although I've reproduced the relevant plate and text as part of this post).  From memory the conversion was just trimming the peak off the cap, adding a cartridge pouch and leaving the rest up to paint.
These are the original Airfix French Foreign Legion – a great robust set. 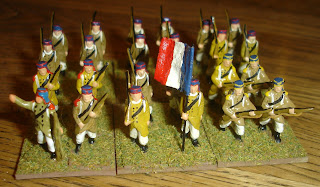 A 24 figure strong brigade for Napoleon's Battles, but painted as a standard six company battalion.

The other brigade, deployed in line, but again with one grenadier and one voltigeur stand. 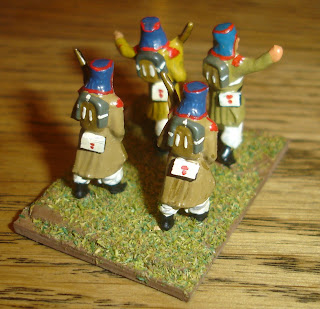 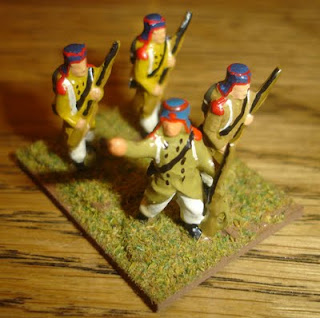 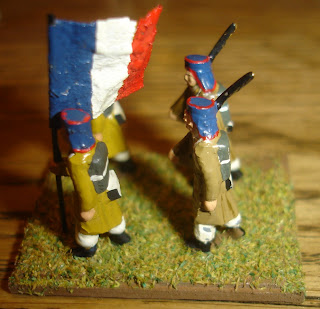 And finally the inspiration. 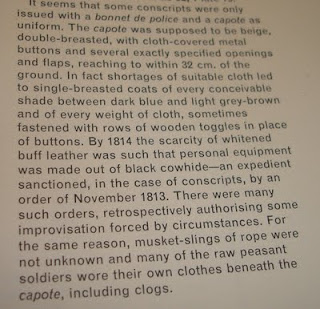 I was going along fine until I had a disaster with the 6pdr.  I stupidly thought I could soften the plastic and straighten it out.  Duh!  All I achieved was to shrivel it up.  Grrrr 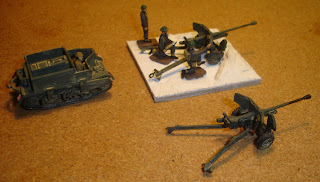 I have a spare, but no, I now have a mini project to scratch build a replacement leg (?) for it.  I had thought of cheating and hiding it under some camouflage netting or something, but I failed to find any inspiring pictures. 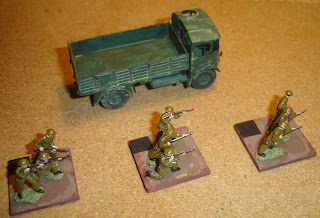 One of the Infantry brigades has progressed well and is now ready for flocking.

As is the Machine Gun Battalion. 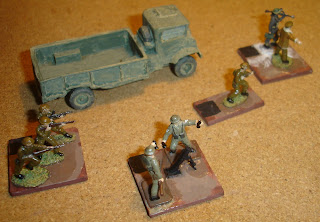 I also have most of the bits for the rest of the Division.  Tim made a comment in his introduction to his creation of the 50th: “This is the best of the Matadors in the division - the only one I didn't have to rebuild from near-scrap.”  As you can see scrap has been the main source for my 50th.

There are at least two RA Field Regiments in there, plus something for the Royal Engineers and part of the LAA Regiment.  I can mash-up a third artillery regiment; it is just the bofors and recon elements I am short of (at the moment).
Posted by Sun of York at 9:47 PM 3 comments:

Eastern part of the Battle of Ligny

This was a hypothetical scenario based on the battle of Ligny 1815.
First up a confession.  I have been pronouncing this name of the battle as “Lig-knee” when, after a comment by Richard, I think it should be “Le-nee”.  A quick attempt with Google provided me with this: http://www.forvo.com/search/ligny
It has an audio of the pronunciation of a person’s name: Jean-Marc Ligny.
Also via Google was this from www.infoplease.com: “Ligny (lēnyē') village, Namur prov., central Belgium, near Namur. At Ligny, on June 16, 1815, Napoleon I of France defeated the Prussians under Blücher early in the Waterloo campaign.”
Anyway, on with the battle.
The set up was a mix of the Napoleon’s Battles scenario for Ligny and the SPI board game (part of the Napoleon’s Last Battles set).  The SPI set up took preference, but the OB came from the scenario.
The hypothesis was that Napoleon had brought up the 1st and 6th Corps which allowed the 4th Corps to more fully engage the Prussian III Corps.
The objective of the game was to use the town fighting rules in Napoleon’s Battles to hopefully generating some interesting see-saw fighting, which, having just read The Eagles Last Triumph, seemed to be characteristic of the Battle of Ligny. 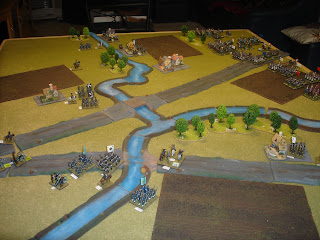 This first picture shows the initial deployment, the scattered Prussians facing a mass attack from the French.  What enabled the Prussians to concentrate was the presence of Blucher whose command radius critically supplemented that of his Corps commander and meant that within the first hour the Prussians had been able to respond to the French advance.
Blucher had been added to the Prussian forces to balance the points.  In retrospect it might have been more interesting to assume that both forces lacked a top commander (i.e. one with a response rating of 10), or to have upgraded Thielmann to a wing commander (improving his radius). 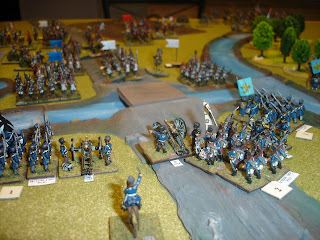 The second picture is the French assault on the bridge.  This is when things got difficult as the marshy stream proved very difficult to cross in the face of a formed and determined enemy.  The obstacle was 2 inches in width and trying to cross in column by infantry or cavalry (with depths of 2 inches and 4 inches respectively) took multiple turns to get across.  The calculation of the distance to cover was the width of the obstacle plus the depth of the unit with the rough terrain modifier applied.  I must confirm that is how the effect is meant to be determined.
So, after a French initial attack was repulsed the battle degenerated into an artillery duel.   The Prussians got the better of this.  However the French had been able to work their way around the Prussian right flank, which presented the Prussians with the same dilemma in that in order to attack the French flanking force, they had to ford a river.

And so ended the battle.
It was an interesting game because it was quiet different – a battle of patience.  It failed to generate the village fighting I had hoped for.  The French had ignored the Prussian left and the two occupied villages (Boignee and Balatre).  On the Prussian right the French had skirmished (unsuccessfully) before the occupied village (due north of Tongrinnelle) while swinging their cavalry around behind it.   Some exposed Prussians, after putting up a good fight, had run for the forest and refused to budge.  The town did come under fire, but without effect.
The Prussian forces are from my collection and are mainly Essex, but with at least one infantry brigade and some artillery from AB and the Death’s Heads hussars from Old Glory.  The French are from Richard’s collection and Old Glory.  All 15mm.
This was an important game for me as it was the first time I was able to try out some aspects of Napoleon’s Battles that I hope to use in a campaign based on the Waterloo Campaign and using the afore mentioned SPI board game.
Posted by Sun of York at 7:26 PM 2 comments: