Old Glory and some other range (Museum?) painted up as Hessians, Neapolitans, Italians and Wurtembergers for MacDonald's XI Corps at Leipzig and based for Napeoleon's Battles. 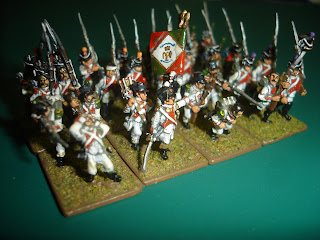 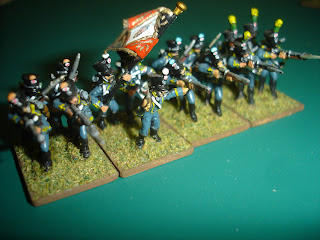 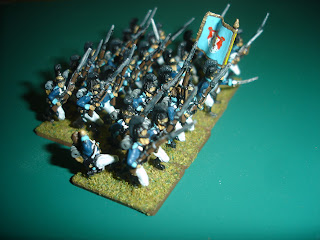 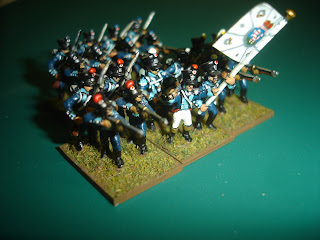 My last post showed some of the scenes from my first Napoleon’s Battles game in a long time.  I think my last game was Lutzen and it would have been early turn of the century.  It was great to be able to play again.   Thank you Richard and thank you Myron for pointing out to me that Richard was looking for an opponent here in Perth.  Amazing timing.
The game was so interesting that it was left set up and we completed it on a Tuesday evening.  All up would have been eight hours or more of play and I think around twelve game turns.  Lots of attacks and counterattacks.  Some surprise successes and many unexpected rebuffs (with one notable much reduced French brigade at least twice repulsing massive Austrian attacks).
I started using version one of the rules and on the second session had swapped to version two.  Richard was using version three.  Even though we had to consult the rules a number of times (more to be sure of a particular process) it all worked quiet smoothly.  We made a few mistakes in rule interpretations, but nothing too fatal.  The only really bad mistake was when the French right wing cavalry missed out on going on react.  In my opinion this lead directly to the collapse of that flank and the subsequent Austrian victory.
This picture captures the point when the French cavalry were observed by the Austrian commander to not be on react.  It screamed opportunity. 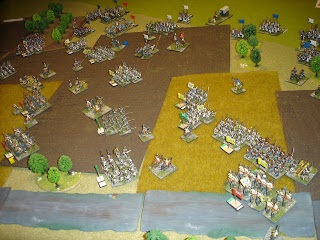 This is the situation at the end when the French moral collapsed after their valiant counterattack had been defeated. 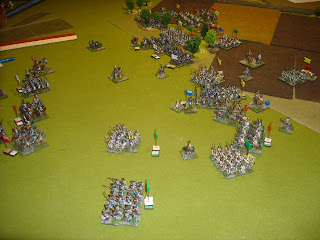 It has been years since I last played a game of Napoleon’s Battles and I was thrilled to get the chance today to command an Austrian army comprising two corps.
Here are the Austrian’s deployed at the start.  The main strength was on their right where they had two divisions ready to push forward. 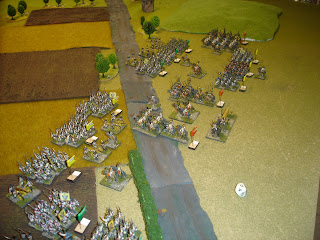 Here is the view of the French in the distance.  Note the marker used for denoting the brigade as well as for keeping track of casualties. 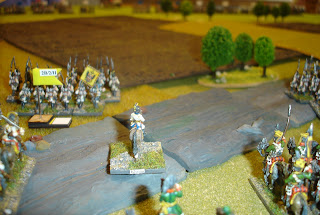 The battle commenced on the Austrian left, not according to their plans, but it seemed like an ideal opportunity to establish a position.  The French drew first blood, but a counterattack by Austrian Grenadiers saved the day.  A similar thing happened on the right, but here the Austrian strength significantly damaged the French when they were repulsed and the situation is ideal for them to press their advantage.  The Austrians just need to rally two brigades first.  Most of the damage was done in the fire phase. 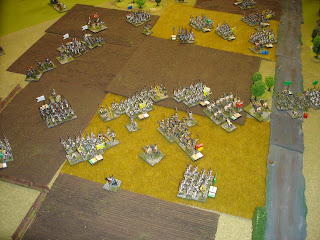 In this last picture (end of turn five) note the French square, making a rather tempting target for the Austrians who have the initiative at turn six. 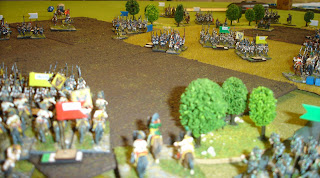 The figures are Old Glory 15mm from Richard's collection.
Posted by Sun of York at 6:38 PM No comments:

Something I should have done before the big move ...

I have embarked on putting all my figures on magnetic bases.  I started with my DBA Dark Ages collection (one of those that allows your to filed many different armies from on basic collection).  This was just to test how it would go.  I must say I was very happy, given that alot of the basing material is just recycled fridge magnets and the tray is from the $2 Reject Shop (or some such place).  I suppose it will be fine unless it gets some mead spilled on it. 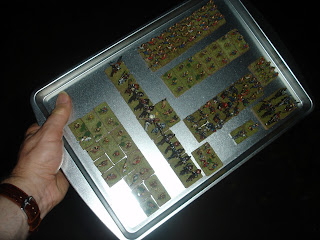 The figures at the front are used for camp followers.

The figures are a mix of Essex (mounted), Tin Soldier, Jacobite and Mike's Models (I think).  The bulk of the foot were given to me decades ago by Myron Shipp and I am sure he is happy to know they are finally painted and have seen a good bit of use.

I am particularly fond of them as Saxons, and in this picture we see them deployed on a cold morning with the sun at their backs.

I consider these to be my first serious wargaming figures, acquired in the 1970s.  I first did the 92nd Gordon Highlanders with the yellow facings, then the 79th Highlanders with the green facings and with the figures I had left the 42nd The Black Watch Highlanders.  Originally they were just painted and played with singularly, then I repainted and based for Bruce Quarrie's Napoleonic rules (mid to late 1970s).  In the 1990s I rebased them for Napoleon's Battles and it is in this guise that you see them pictured here. 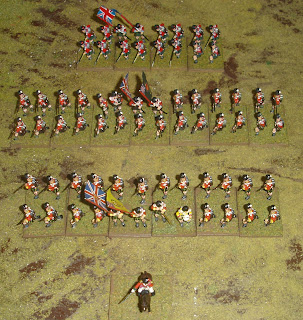 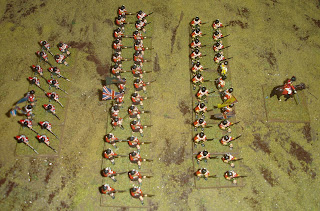 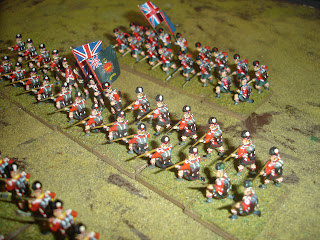 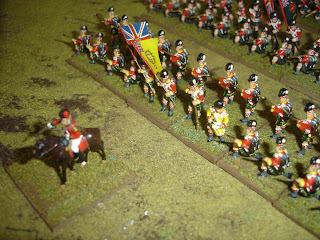 I suppose this could be the 5th Highland Division and to give the three brigades their Napoleon's Battles descriptors we have 24BrLN, 28BrLN and 16BrLN.

The poor drummer boy ... from my earlier post Cut Off At The Knees, you can see he has not mended properly.  I'm sure there is a medical condition for this.  I don't know how it happened, except doing it late at night, after possibly a few wines and with my diminished sight and mix of adhesives, I shouldn't be surprised.  Note his companion is fine. 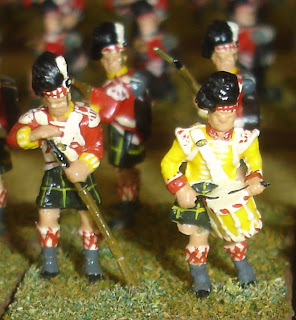 The 42nd had suffered some misfortune in the move, but it was not plastic fatigue related and they repaired without trouble.

A final close up of the 79th Highlanders. 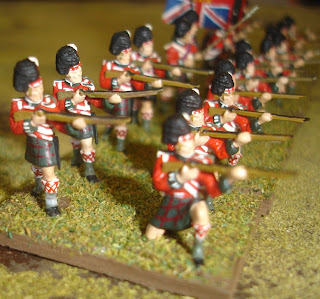