On my first vist to Tactics I stumbled upon these.  I don't really need more plastic figures for WW2, but I just couldn't resist - I've always wanted this set and never seen it before.  I was very pleased with what was in the box.  Now how long before I have it assembled and painted? 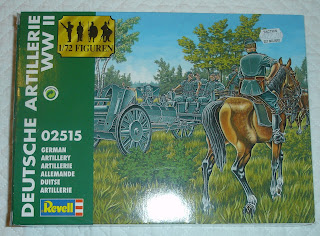 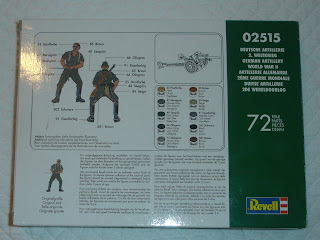 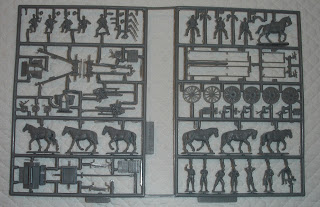 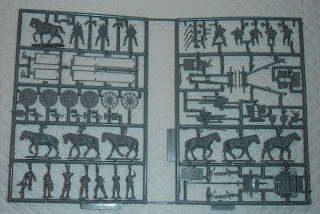 No need for a descripton, a picture says a thousand words.

Cut Off At the Knees

This stand can be just made out in the picture described as “the real horror”.  The front two figures had snapped off at the ankles – the only breakages that I attribute to plastic fatigue (brittleness).  I had repaired them successfully using super glue and PVA (white) glue and had just touched up the flocking.  In tapping the base to remove excess flock the two figures snapped off at the knees!  Bugger! 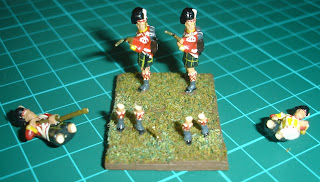 If you look closely you can see the previous break at the ankles.  For the next repair they are getting a total cover in PVA. 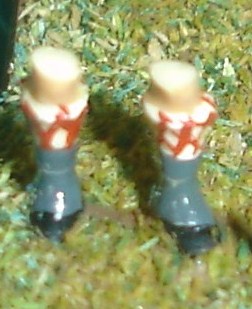 For the last few days I have been unpacking my wargaming figure collection.  Given that my packing was fairly haphazard surprisingly few were broken.  Copenhagen was a surprise though: 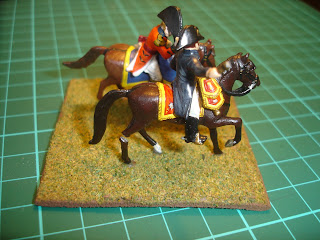 Easy to fix with Super Glue followed by a liberal coating of white glue.

However the real horror was this: 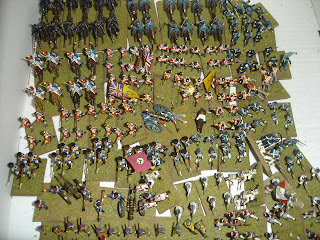 The only real casualties were two 92nd Highlanders, including the drummer boy, snapped off at the ankles.  To repair, again I used Super Glue followed by white glue.  Very effective.
Posted by Sun of York at 10:50 PM No comments:

Just something very simple that took forever for me to complete even though they were extremely simple to make.  I will use these for Crossfire and anything else that might need such things. 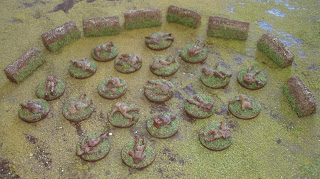 A Pair of Mortars

Some years ago I started converting my WW2 army from Command Decision to Crossfire.  It is still a work in progress and I am plagued by doubts about the right size to make bases as well as details like material to use for bases and flocking techniques.  I decided to test out a new size and technique on a pair of Russian mortars I had left over.
The mortars were based for Crossfire, but I trimmed the base size down to 30mm square.  I had also bought myself a new craft cutting mat for Xmas (my first – previously I had just used bits of wood).  I was amazed how easy it made things. 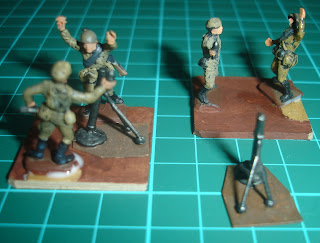 Then I experimented with some texture paste from Jo Sonja.  This is not something I normally do when I base figures, but this time it also served triple purpose:
·         try the paste out and see what it was like to use;
·         try and give the impression of a mortar pit; and
·         build up around the Airfix Russian ring-in (all the other figures are Esci Russians) as I had positioned him so he was totally within the base (no overlap). 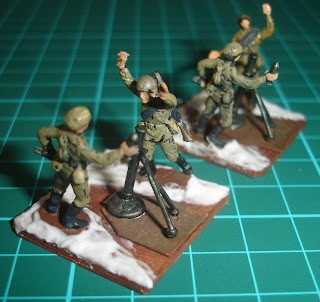 I should say that at the same time I was experimenting on the pair of mortars I was also rebasing some ACW 15mm for Fire and Fury.  They were already based to the correct width, but the depth was slightly deeper than all my other ACW figures: just enough to annoy me.  Enough said.  The figures were Old Glory and beautifully animated, but with bayonets fixed they were very tricky to arrange.  This resulted in lots of overhang, something I wanted to avoid with my WW2 troops (and all figures really), particularly on the sides or flanks of the base.
After the paste I then applied some sand a few ubiquitous kitty litter rocks. 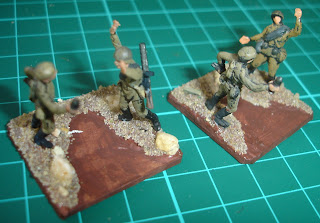 Then an undercoat of some brown paint and a dry brush of a lighter shade (Folk Art 416 Dark Brown and Jo Sonja's Fawn respectively). 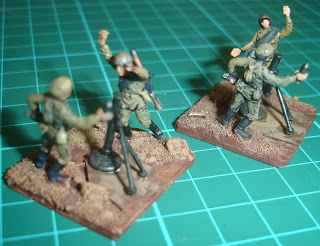 I tried doing a highlight in white, but I didn’t care for the result (although it can be seen later on the “dug-in” markers).
Finished with some flock. 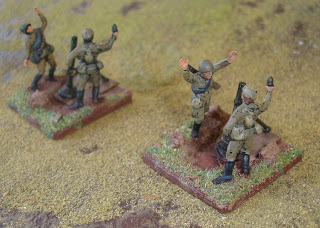 Nicely dug-in and ready for action.

The models were finished with a matt spray (Wattyl's Estapol Matt)
Posted by Sun of York at 11:35 AM No comments:

Seeing how I mentioned it in the previous post I figured it warranted an appearance. 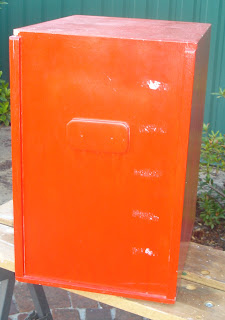 And yeah, like the famous blue box, it’s bigger on the inside. 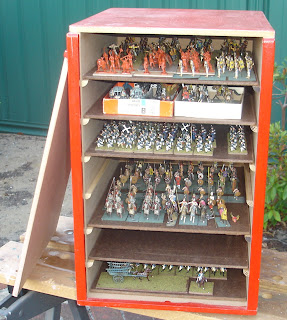 My dad made this for me, sometime in the 70’s.  Mum painted it red (Chinese red I think is the colour).  It has a smaller three shelf companion which I used for transporting troops to conventions, however it is in need of repair: the top is caved in after what looks like an attempt to use it as a step – so, yet another project...
Posted by Sun of York at 10:21 AM No comments:

I have an old red box that was purpose built for me by my dad to hold some of my wargaming figures.  It’s seen better days, but it is still useful and has a lot of sentimental value.  So when it came time to move house I hung on to it.
It survived the trip and came in handy as a plinth for our Xmas tree (grumble grumble).  A couple of weeks later I was using to help sort out my figures and I was shocked to find hiding at the back of the top shelf my Ancient Briton DBA army I had built in a fit of madness from old Airfix Ancient Britons.  Not a single breakage, which is amazing as there were some conversions amongst them that could only have contributed to their fragility.  I’m sure they did not travel over from Canberra in that box; I must have emptied them out of another box and then forgot about them.

I hate to think how long I had these figures before I finished them, maybe twenty years.  They are the most recent addition to my Napoleonic force in 15mm and my first Austrians.  I agonised over how to do the wash to get the belts to look right.  Thankfully I am very happy with the results.  The colour scheme is for IR 43 Graf Thum although they represent a brigade as based for Napoleon's Battles. 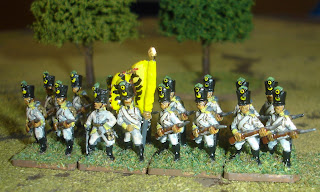 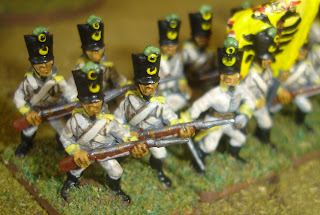 The figures are by Essex.  The standard bearer is a one-piece casting.
Posted by Sun of York at 8:42 AM No comments:

I have just relocated from Canberra to Perth, a distance of 3723km.  This is roughly the same as from London to Moscow (if you are not a crow).  The journey was part car and part train.  Remarkably the breakages within my wargames collection have been few (although I’m still unpacking).  A shield had fallen off a Hoplite, although this might have happened before the move; easily fixed.  No damage to my ACW and in unpacking them I got around to a job I had been meaning to do for a while – about twenty stands were a few millimetres too deep, just enough to be annoying.  A sharp knife and a lick of paint and they are now ready for service.
But I did find in my collection of perhaps best forgotten plastics that the spare chariot I was doing for my Ancient Britons DBA army had suffered a misfortune: 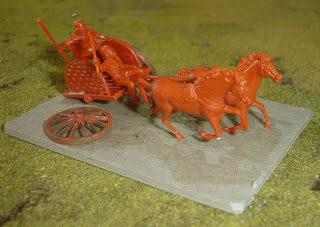 Is this a sign I should abandon my attempt to build a matched pair of Airfix Romans and Ancient Britons for DBA?
Posted by Sun of York at 8:29 AM 2 comments:

Years ago I created a two battalion regiment and regimental assets using basing and TOE from Command Decision in order to use up some old Airfix Germans.  What I now want is something I can use for multiple rule sets and different representations of organisation levels: battalion, company, platoon etc.  I did a little research and came up with the following organisation from bayonetstrength:


What I want is something I can use for multiple rule sets and different scales.  As a result I came up with the following table:

Of course just one stand is required to represent the unit at the Battalion Level.

The above picture is the first Battalion.  Mainly Airfix’s original WW2 German Infantry, but with scratch built IG 75, mortar and machine guns.  Each stand represents a Platoon sized unit more or less. 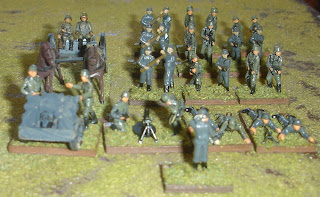 The above picture is the second Battalion, identical to the first, but with a few ring-ins (mainly Matchbox) to make up the numbers.  I’m still working out how to get the best out of my camera when it comes to photographing miniatures. 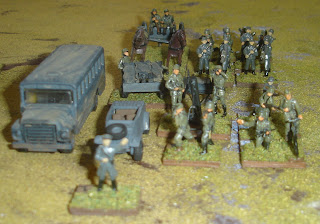 This picture is the Regimental assets.  Airfix again, but with more odds and sods (even a guy from the Airfix German Mountain Troops making part of the engineer platoon).

The last picture is a generic Volksgrenadier unit.  I particularly like that it is out of focus.  It wasn’t intentional, but it reminds me of the “Vaseline on the lens” technique used to get a soft, romantic image; perfect for these old figures that are full of nostalgia.

The only thing I am not happy with is the very small two figure basing.  I would much prefer something like the one and a quarter inch (32mm or so) square Crossfire bases, but this is a much bigger subject for another day.
Posted by Sun of York at 4:31 PM 2 comments: