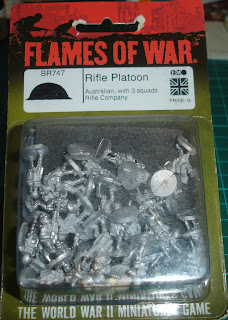 After our last Blitzkrieg Commander game Richard gave me two packs of Battlefront Miniatures Australian Infantry.  Prior to this, while I have admired the figures, I have stayed strictly away, wanting to concentrate on my 1/76th scale WW2 forces.  But inspiration struck as well as a desire to get more Vallejo paints.


I really got stuck into these guys (it helped that we had finished watching Lost), aiming for a force to protect Crete from the onslaught of Richard’s Fallschirmjagers.
Method


Cleaned up, not significant flash except on bases which was easily dealt with.  Some of the venting streamers were a bit trickier, but so far I have only found one that I missed.  Detail looks good although some of the poses are perhaps a bit to ‘knees bent crouching behaviour’, but then I don’t blame them!
Washed the 37 figures in warm water and dishwashing liquid and rinsed well.


Then I used PVA glue to fix them to cardboard strips by base groups for ease of painting.
The undercoated I used was Tamiya XF10 Flat Brown.  I was a bit apprehensive, but it has really gone on well, dried well (it seems to shrink on to the detail rather than cover it up even though it went on thick – it was a brand new pot and I didn’t feel it needed thinning).  It has really made the figures look good and this bought on a round of obsessing about what colours to use and how many layers etc.  Lots of research and no definitive solution...


Somewhere I had read advice to paint the faces first and so I did this with Vallejo VJ 70955 Flat Flesh.  I’m so glad I did this and stopped after the first two figures.  It was too pale.  I wanted bronzed Aussies.
Luckily I found that Vallejo VJ 70860 Medium Fleshtone over the brown undercoat provided exactly what I was looking for. 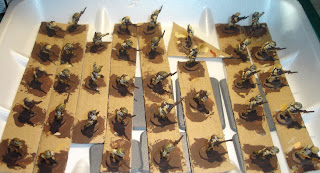 Boots, bayonet scabbard and rifle trim I did in VJ 70950 Black.  Then came hats, socks and water bottle in VJ 70921 English Uniform.  The actual uniform I did in VJ 70819 Iraqi Sand which I also used to dry brush over the slouch hats.  I was doing this over the socks as well, but changed to painting the gaiters as part of the webbing which I did in VJ 70976 Buff all though I did do the packs first in Stone Grey.
The helmets I did in VJ 70977 Desert yellow over brushed with VJ 70847 Dark Sand.

For the rifles I mixed Cavalry Brown with some Black.  The trim I finished in Metallic Gunmetal Grey (not a VJ colour) and bayonets then got a brush of Pure Silver (not a VJ colour).
The bases I painted in Tamiya XF52 Flat Earth and that then leaves with the basing dilemma: the pictures had five per base and I think four is the maximum I want to do, also just two on the small bases.  That will leave me some figures for singles which can then be commanders for use with Crossfire. 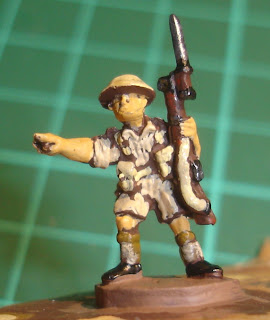 He looks a bit scary all blown up in the photo like that ...

Perhaps a bit premature posting at this stage, but I’ve had these guys six months and want to get them done.  I bought them to form the other brigade of Prussian HC that appears in the Napoleon’s Battles Lutzen scenario.  The first brigade I built using ABs and they are wearing the blue tunic and have already been posted.  I wanted the second brigade to be in white and after some searching and a wonderful bit of serendipity found the Old Glory pack.


The only problem is that for a lot of the figures, the riders hands did not align with the reins. A bit of bending, shuffling and carving later I got them ready to assemble.  Of course after all that handling they needed a wash and here we can see them drying after their bath. 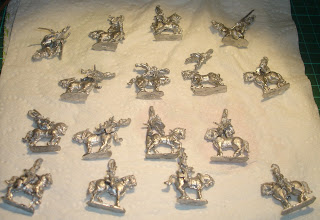 Still working on the Quads which are now undercoated (Tamiya XF1 Flat Black) and one has its base coat (Tamiya XF58 Olive Green).  I also found the figures for the crew and they are nearly finished.  I’m thinking of basing the Quads and limbers together and not sure if I will go for 90mm or 60mm squares for the guns.  Probably 90mm as that will set my standard for field artillery.

Progress has been slower than expected as we’ve been watching Lost, Season 1 to 6, on DVD.
Posted by Sun of York at 9:28 AM No comments:

Most of my time with these guys has gone on agonising over what base size to use.  I’ve settled on a permanent fixture to a 90mm square.  So far I've done little more than undercoat them, but I have also started using Vallejo paints (on these figures the flesh and grey - base is Tamiya Flat Black). 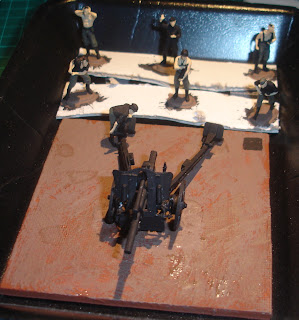