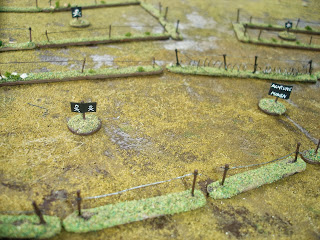 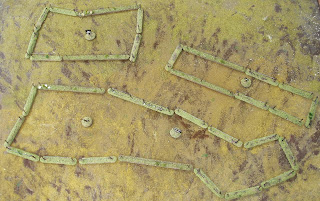 Another exciting 800 point FOG game today with my Greeks taking on Mark’s Ghaznavids.

A lot more terrain than usual (I am still learning how to handle medium foot and as I was running a unit of Thracians and one of Cretan militia I thought hiding them in a vineyard and on a steep hill would be the way to go against a cavalry army). 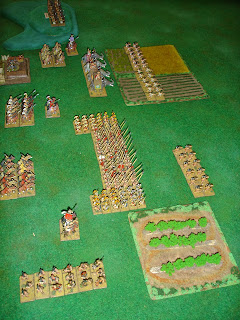 In the picture above the Ptolemaic left is anchored by the Cretan javelin armed conscripts on the steep hill, which has disordered them, but hopefully put them out of harm’s way.  The right is the vineyard where the Thracians are heading.

The Ghaznavid centre, defending their camp. 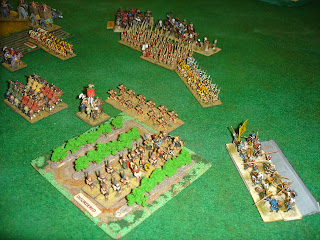 The Ghaznavids wanted that vineyard!  In the centre can be seen the Ghaznavid skirmishers harassing the Ptolemaic pikemen.  Thorakitai (Hoplites doing double duty) guard the flanks of the pike phalanx. 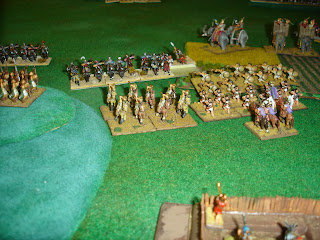 More skirmishing on the left: the elephants being too slow to get into action, but still wheeling around all the same.  The little chap is sounding the alarm in Ptolemy’s fortified camp. 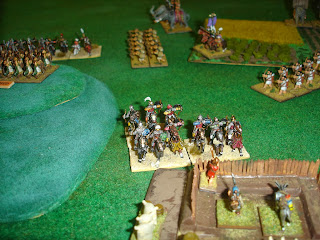 The Cretan foot on the hill look on terrified as the Ghaznavids successfully assault the camp, despite the efforts of the trumpet dude. 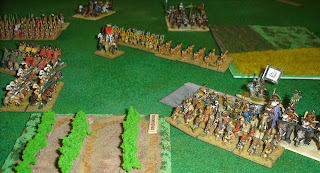 The Thracians fight grimly for the vineyard, but are being worn down, particularly by the enemy elephants.  The Xystophoroi lancers are trying to come to their rescue. 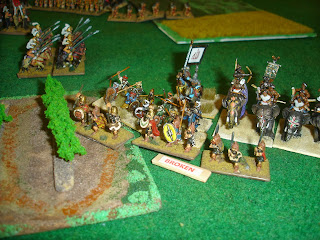 The Xystophoroi are too late and the Thracians are broken. 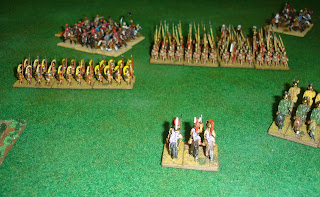 Ptolemy checks out how his centre is going.  At this stage I was two units and my camp down. 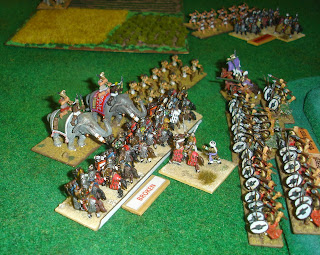 But on the left things started to look up.  A unit of Ghaznavid Mameluks are wiped out when trapped between the Cretans infantry they had been hassling on the hill and the elephants that came round to attack them.  In the background the other Mameluk unit, laden down with loot from successfully sacking the camp, is shot to pieces by some Ptolemaic archers. 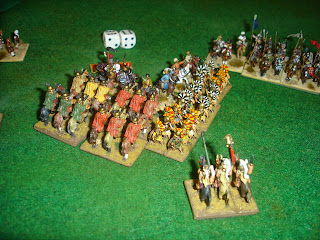 On the right a unit of Ghaznavid light horse fought desperately so their lancers could take the Ptolemaic spearmen in the flank.  On their cohesion test they would break on anything but an 11 or higher ... 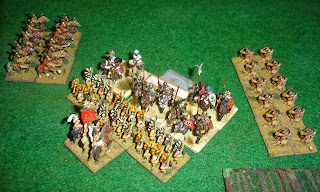 However that had used up all the Ghaznavid’s good luck and their cavalry came off the worse in the resulting combat. 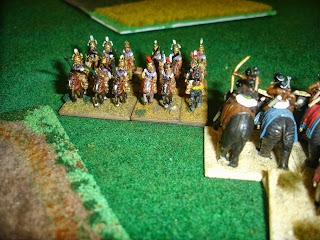 Ptolemy himself, doing his best Alexander the Great impersonation, has revenged the Thracian foot, but is now in a standoff with the Ghaznavid elephants. 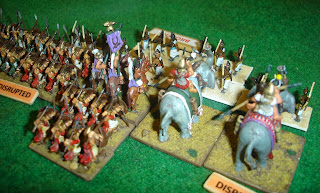 Meanwhile on the left the Cretan conscripts aided by the elephants defeated a unit of Ghaznavid bowmen who had arrived too late to save the Mameluks. 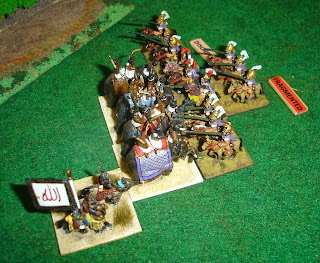 Ptolemy’s fight with the elephants was not going well, but by this time the Ghaznavid morale had broken.  Phew! 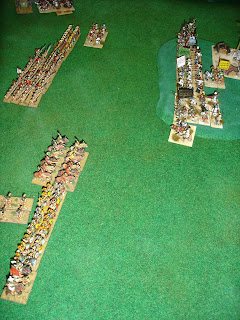 And just as well as clearing their remaining force off the hill would have been a hard slog.

The Trouble with Trenches

The first: http://www.igg.org.uk/gansg/00-wargame/trench.htm
This is perhaps a bit too elaborate for 15mm, but I might do something with it one day for my 1/72nd scale WW2 miniatures.

The second: http://www.instructables.com/id/WWI-Trench-Model/
Inspiring, but more suitable for a diorama.


Way to go!  Earth banks cut from a strip of timber framing, suitably painted and flocked should get us by.  I might try and do some “dug-in” infantry as special bases, if I ever come across a supply of cheap heads etc.

Not exactly a trench, but a very nice model indeed is this from Thanos: http://miniaturesterrainpage.blogspot.com.au/2013/09/machine-gun-nest.html
Posted by Sun of York at 6:29 PM No comments: 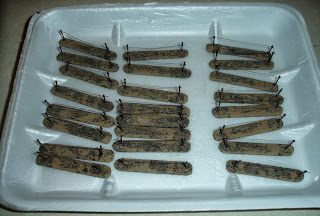 Representing trenches is a challenge.

Here are two ways of doing it using home made dug-in markers. 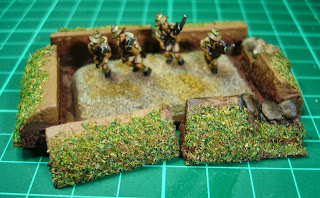 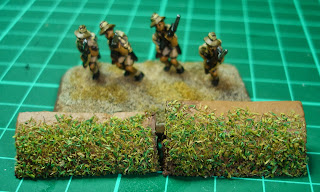 I don't really like that approach as it takes up a lot of table space.

The picture above shows an alternative way of depicting a trench using the same markers, but of course now there is no room for the troops.

Investigations will have to continue.

Finally, in searching for the dug-in markers I came across these wire entanglements that I made for Crossfire and while a tad warped (they were just made on cardboard, probably from a pizza box) they can possibly still do service. 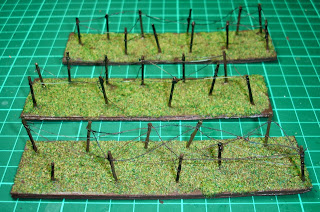 Minefields are required for a future game and my plan is to build the wire markers that surround the fields using nails embedded in popsticks strung with thread, painted and flocked.  The picture shows stage 1 of half lengths prior to base coating.  I cut the popsticks down en-mass and filed the new edge round at the same time.  I whittled the sides down a bit so they can blend in better with the table top.  Banging in the nails was easy with a small hammer and the whole lot is secured with PVA glue and a sprinkle of sand. 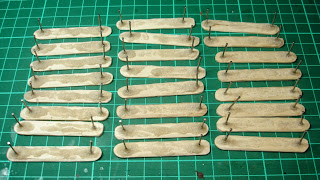 I had seen this game, but never had the chance to play until now: http://boardgamegeek.com/boardgame/9203/wings-of-war-famous-aces

Was able to play three games in around two hours.  First game just one plane aside, progressing to two and finally three planes each.

I have just seen that my last post on these guys was July 2012.  I have now completed another batch (it’s not just all Napoleonics I have been painting) and now only have a few support elements to complete for this army.

Part of the delay was due to running out of basing sand and being unable to get a satisfactory replacement until Mark Woods came to my rescue with a bucket of white sand that should see me good, for like, forever. Cheers!

The other problem was I got distracted by exactly what kind of formation I was building.  Finally I took the same route as I had done with my 20mm WW2 figures and built it as a stand representing a squad, platoon or company (or even battalion if need be).

This is what I am aiming at: 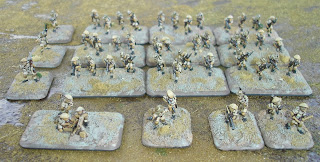 This picture shows the troops assembled as a company for Crossfire. 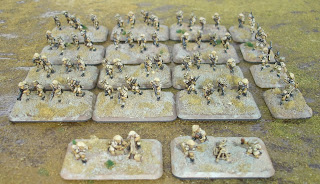 With a stand now representing a platoon the above is a battalion for Spearhead or Blitzkrieg Commander.  It will be around 1200 points when I have it finished for BKC, although I am still working out some details – HMG allocation is rather tricky as they were not organic to the battalion, but allocated from the divisional machine gun battalion. 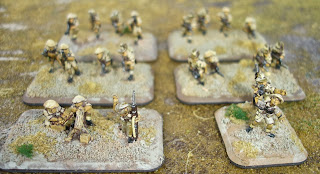 Taking a stand to represent a company, we now have a battalion for Blitzkrieg Commander.

The scenarios I am looking at involve either multiple battalions, single battalion or multiple company attacks and so the force structures I have come up with should provide the necessary flexibility.
Posted by Sun of York at 4:07 PM 1 comment: