Friday Richard and I completed the GMT Normandy 44 game. 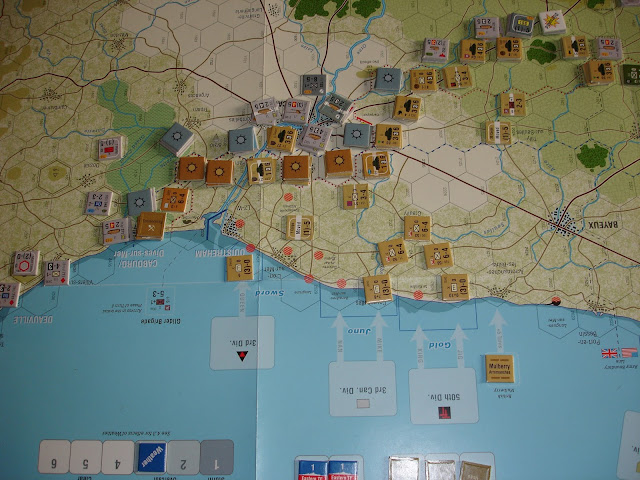 The weather was overcast.
With the benefit of hindsight I can say that the Commonwealth front has stabilised. 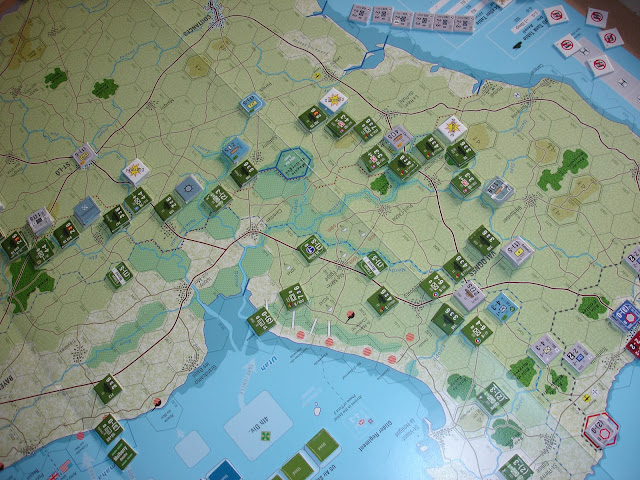 The US front is where the action is.
Particularly the Cherbourg Peninsula. 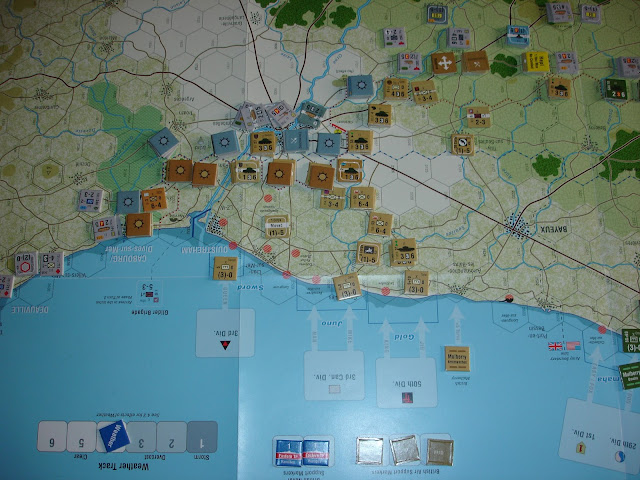 Attacks were still being made by the Commonwealth,
but more a war of attrition to tie up German reserves. 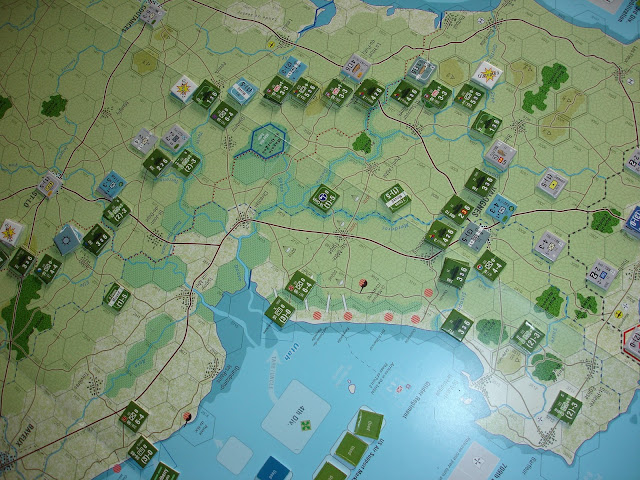 Is that thin grey line ever going to break?
Finally getting progress against Valognes. 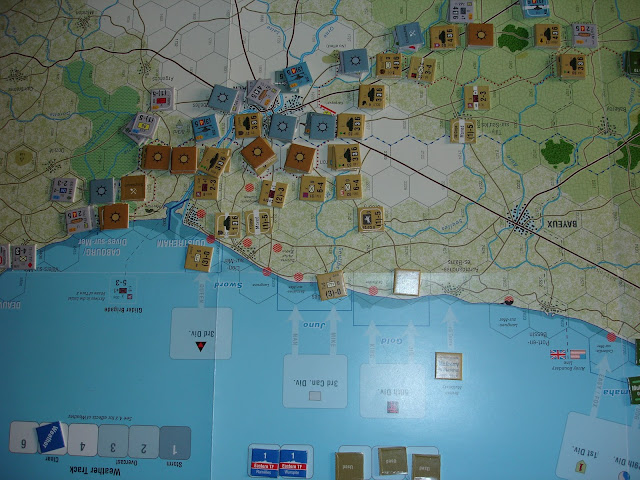 The weather is remaining clear.
The Commonwealth have landed all their reinforcements. 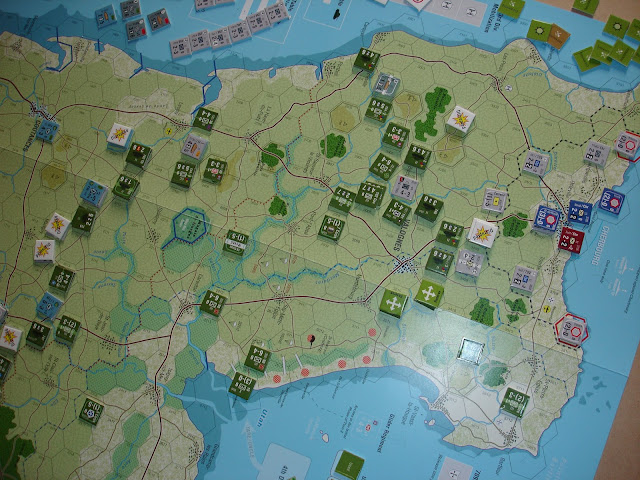 Finally.  Cherbourg is cut off.
However time is running out. 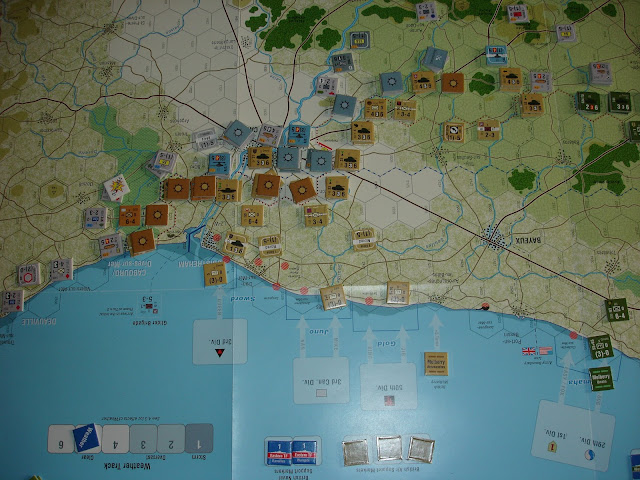 The weather is still clear.
At this stage this just means the Allies have extra shifts from airpower in combats.
The British kept attacking Caen and the Canadians sploshed into the flooded river on the far left.
Progress on the sector has been better than historical. 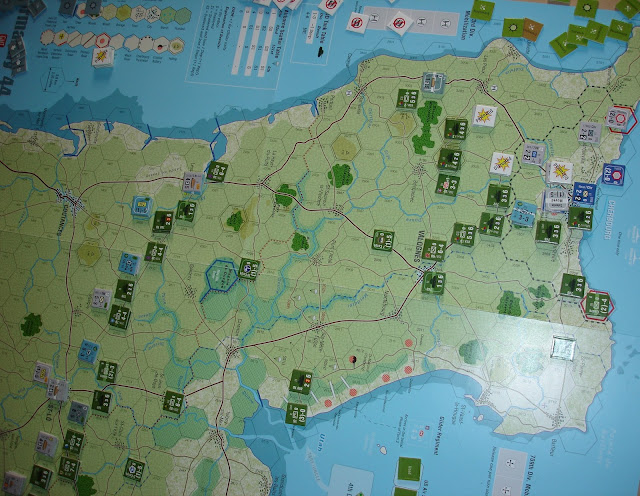 The race to Cherbourg has been won by the US.
Except for this part, the progress on the US sector has also been better than historical. 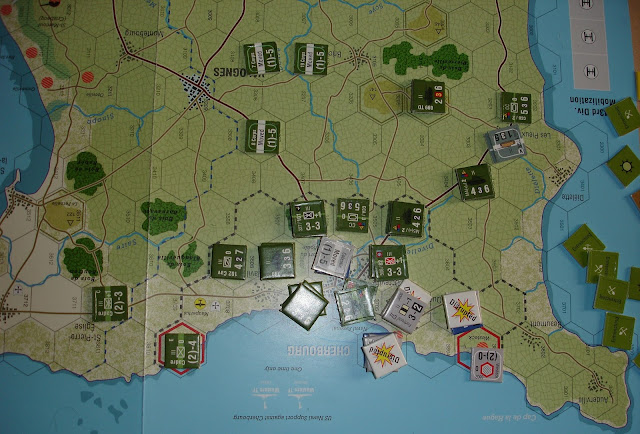 This was the penultimate turn.
Wind stopped play at this point. 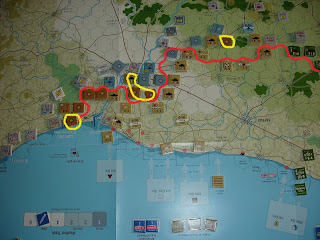 The red line is the historical advance at the end of the game.
The items circled in yellow are the additional town/city hexes captured by the Allies
and that give victory points. 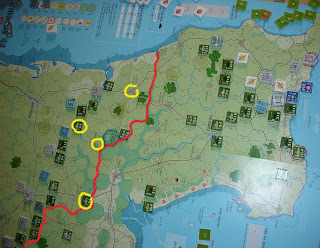 Same goes for the US front. 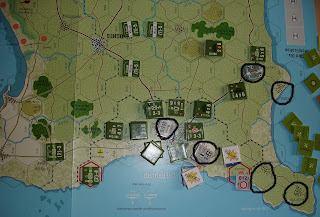 With one turn still to go, there were six places still German controlled
in the Cherbourg area.

Even if the Germans held all six, the Allies were nine up, and so an Allied victory.  It was close...  A bit more stormy weather...  A few more successful German attacks and desperate defences would have made all the difference.

We did learn as we played so we might have made some early mistakes.  Particularly the difficulty of forcing quality troops from cities and strong points.

A good game with lots of thinking.  Some interesting mechanics that take a bit getting used to.

The Allies' paratroops are key fighting troops and perhaps are used more in the game than they were historically.
Posted by Sun of York at 1:59 PM