The Mahdists are coming... 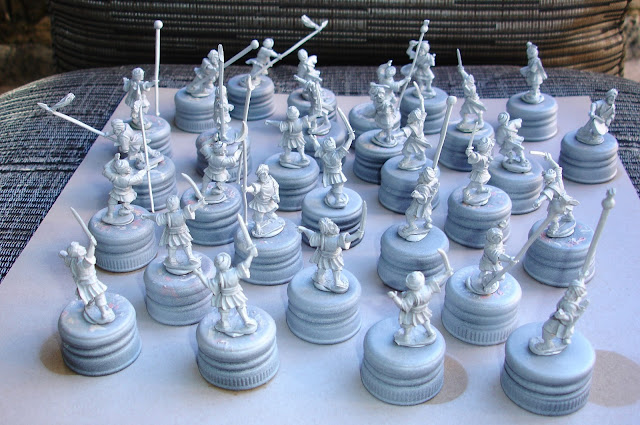 Cleaned up. assembled and undercoated.

I first posted on these guys late December, 2014.  I didn't think it was that long ago, but three years these days ain't a long time.

Unfortunately I don't know the manufacturer of these figures.  I'm sure someone will tell me.

Recently they had started to inch towards my painting table.  With the hot weather I found myself unable to continuously paint, but could start fiddling with figures.  I'd also been doing a little bit of research aided by a cache of Osprey books and more recently a concerted effort to start indexing my Military Modelling magazines (which of course finishes before their article in 1985 on the Mahdists).  Luckily it was Pyjamas to the rescue.

What got me thinking I could actually paint this number of 28mm figures was this article by One man and his brushes. So rather than my usual black undercoat hand painted, I was going to try spray painting them with a white undercoat.

But before I could do that I was struck by indecision.  Should I base them singly (on 20mm square bases and use them for Songs of Blades and Heroes or similar skirmish type games), or should I base them for Impetus Basic Battles?  While it could still change I have decided to base them for Sands of the Sudan as that rule set's 100mm by 45mm base (of 7 to 10 figures) will fit within an appropriate troop type IBB base of 120mm by 60mm (just need to make a sabot).  These 30 figures will make four bases.

The figures cleaned up okay, only a few needed major work (drilling out a wad of metal cast between the legs on three of the drummers).  However now they are undercoated I see more mould lines I should have dealt with (hopefully a lick of paint will deal with them).

I very rarely use spray paint (except for varnishing) and had to get up early while it was still cool and not windy.  I used a Tamiya Flat White (which by a Xmas miracle had turned up in Stanbridges yesterday when it wasn't there on Friday).  It was a great relief when I found that the spray had worked.  There are numerous areas not adequately covered (which is why I normally do this step by hand), but which will be easily tackled in my next planned step which is the application of some light grey to the recesses.

It is possible I might get these figures finished next year.

Email ThisBlogThis!Share to TwitterShare to FacebookShare to Pinterest
Labels: Impetus, Sands of the Sudan, Sudan