Will the Union progress the war with any vigor?  Let's see...

Only New Orleans is open to foreign imports which adds 3 to the 74 supplies the Confederates carry forward.  Major cities gives them another 60 and minor cities 50.  The total is 187.

Both sides have 10 personnel points.  The Union however get 1 militia every month this year in Kentucky and 1 every even month in Missouri.

The Union ironclads are still not ready.  However plenty of Union troops are.  A river flotilla is launched in St Louis.  A 10,000 strong division goes to each of Bowling Green, Washington and Baltimore.  A railway repair unit also goes to Baltimore.  2,000 cavalry are received at Washington.  Rosencrans is given command of the newly formed White army which contains a detail of coloured marines.  The few militia in the Union army all decide to stay with the colours.

The Confederates muster garrison troops in Atlanta (5,000), New Orleans (2,000) and Raleigh (1,000).  A supply train is also created at Raleigh.   Hood, who the papers are calling the savour of the South, arrives in Atlanta to takeover from the recently deceased A Hill.  Price is promoted to command the Army of the South in Raleigh and Wheeler returns to duty and takes over Price's old corps.  There are no partisans.


The Union get the 2 chit.  The Confederates tell them they should give up.

Hood is ordered to stop Sherman.

Polk is ordered to stop Banks.

Wheeler is ordered to take supplies up to the Roanoke.

There is no need for further adjustments.  The Confederates are confident they have the Union beat.

The Union rail Sykes and 10,000 men to reinforce Sherman.

The Union ship out Rosecrans and 11,000 men plus a railway repair unit and supplies bound for Brunswick.

Heintzelman looks for a way across the Nottoway while Pope and Meade stay chatting in Richmond.  Thomas prepares for another attack.

McClellan makes a dash for Bristol.  The rest of the Union Generals in the East either prepare their attacks, write their memoirs or letters requesting reinforcements.

Sickles joins the race to Bristol.

Sherman, now that Skyes has his back, starts an outflanking move on Hood.  Hood might be a good general, but he is not yet in charge of the Corps and has a limited command span.

Hooker and Halleck fail to react.  What are they waiting for?

Reynolds establishes a railhead at Mobile and then pushes north hoping to meet up with troops that Banks left picking cotton.

Finally Burnside gets on some boats and sails for Yazoo City.  He will arrive next week.

Lyon sends his cavalry to clear the train line that puts Buell's army back into command.

Ord keeps the garrison troops moving to Cairo, but a 1,000 drop out on the way.

Franklin returns to Washington having picked up 2,000 militia in Harrisburg, PA.

There are no attacks in the West. 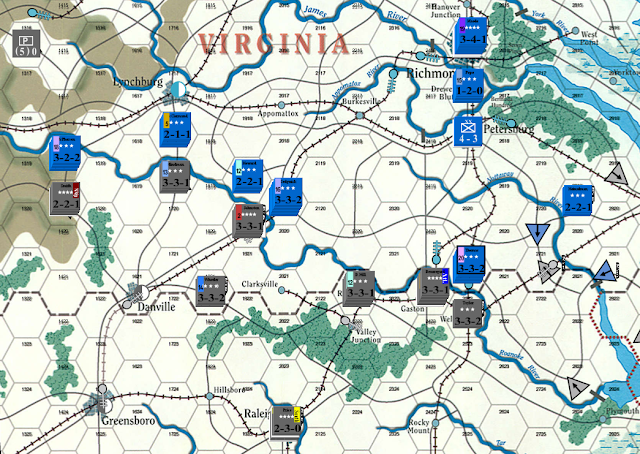 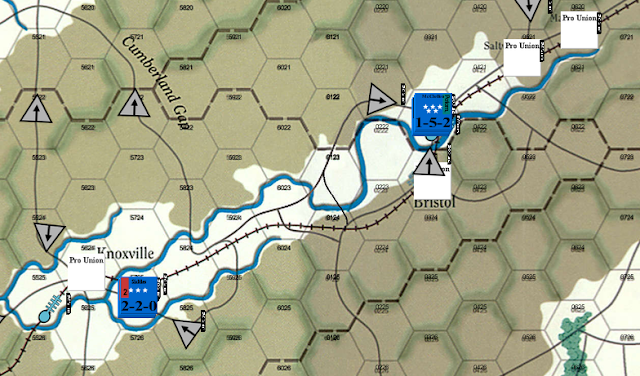 The West where the war can be won or lost.

The Union step up their game, picking the 4 free initiative chit.  Should the Confederates be worried?

Wheeler joins Bragg in trying to hold off Sedgewick.  D Hill is brought over to replace Taylor who is sent up the Roanoke to reinforce Smith (eventually).

Part of the Atlanta garrison is sent to cover the Chattahoochee River crossing to the south west of that city.

Troops are shuffled about at New Orleans.

Jackson and Forrest hold their positions by Vicksburg, as does Hood in front of Atlanta.

Price decides to take his new army, all 3,000 of them, north to the Roanoke.

In contrast, Rosencrantz and his new army of 11,000 men land at Brunswick.

Halleck is ordered to join him.

The troops Banks left in Alabama are told to meet up with Reynolds.  This means the rail line from Mobile now extends to Winchester.

Burnside disembarks and is sent to besiege Vicksburg.  Farragut looks at bombarding Vicksburg, but could really do with those extra ironclads that he has been promised.

Pope is ordered to send troops to Thomas and then report to Washington.

Granger has finished clearing out the last vestiges of rebels from the Shenandoah Valley and heads to the front, eager for further glory.

McPherson tries a sneak attack on Smith but it is to no avail.  Sedgewick sends McPherson some reinforcements.

Sherman sends out parties to clear his flanks, but decides to keep close to Sykes and his supply line (for now).  Hooker needs to coordinate with Sherman, but there is trouble getting messages through.

Couch tries to force Forrest back, but is outsmarted and almost captured.  Lyon has initiative but no opportunity.  He needs McCook to come down and help, or Buell, or anybody.

Couch tries to attack again and this time Forrest retreats.

The Confederates order the militia holding Jacksonville, FL, to pull out.  A 1,000 desert in the process.

Buckner is ordered closer to Atlanta to protect against any sudden incursions by Hooker.

Price is order to reinforce D Hill, his troops, being garrison, will take a while to get there.

Taylor joins Wheeler.  But then Wheeler is sent to reinforce Smith.

Jackson is tempted to counterattack Couch, but is told not to.

The Union tell Reynolds to push on to Meridian, MI.

McCook is ordered to join Couch.

Nothing else moves in the West as armies are all in position to attack (mostly).

Rosencrans advances out of Brunswick, heading for Halleck.

Granger sends reinforcements to McPherson and then returns to Washington.

Franklin gets the 10,000 man division that is languishing at Washington and gets it moving south.

No further land movement occurs in the east.  However at sea, Porter takes the ironclad down to Charleston.

In a further bit of Northern frustration, no attacks occur against the Confederate Roanoke line.

Sherman attacks Hood on the 161-200 Column of CRT 4.  The fighting is bloody with the Union losing 4,000 men and the Confederates 5,000.  Hood is wounded and out of action for five months.

But that's the only attack.

The Union get the 7 chit.

Reynolds is encouraged to push on to capture Meridian, which he does, drawing a long noose a bit tighter on the Confederates in the West.

The Railroad repair unit in Mobile gets to work.

Sumner is told to hurry south.

Halleck is pulled back (just so he can manage the isolation rules better).

Franklin continues his march with reinforcements towards the front.

Butler is ordered back to Washington, but he goes to Baltimore instead (I'm not sure if naval transports can enter Washington - is it on a river or the coast?  Regardless, Butler's boat was so grand it needed plenty of clearance).

Granger sails to Norfolk with the new cavalry division and will proceed to look for a way around the mouth of the Roanoke River.

Meade finally decides he's had enough of Richmond and returns to Washington.

Buell decides to attack Forrest on the march.  Forrest stalls him with ease, but has a scare when he finds a bullet hole in his hat.

Rosencrans makes an attack wriggle maneuver and crosses over the Satilla River.

Sherman and Skyes miss their opportunity to attack the leaderless Confederates covering Atlanta.

McPherson fails to attack, but Sedgewick does, hitting Taylor on the 111-130 Column of CRT 3.  Both sides lose 4,000 men.  The Confederate line holds.  Bragg is mysteriously killed in the fighting and Taylor is able to take command of his corps immediately.

The Confederates have some decisions to make.

The militia on the Satilla River destroy the rail line and slip away.

Walker is directed to takeover Hood's Corps and some reinforcements are sent with him.

Jackson shuffles troops around and that's it.

The Confederates have survived another month. 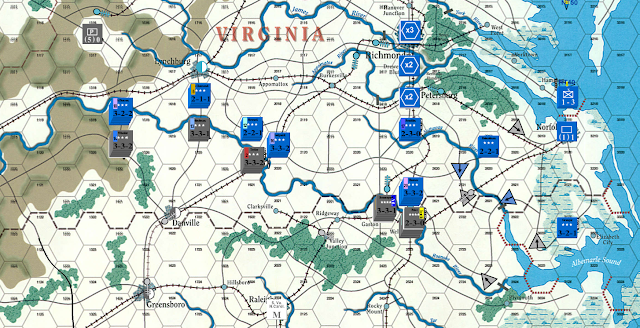 The Confederates have successly held on to the defensive position behind the Roanoke River. 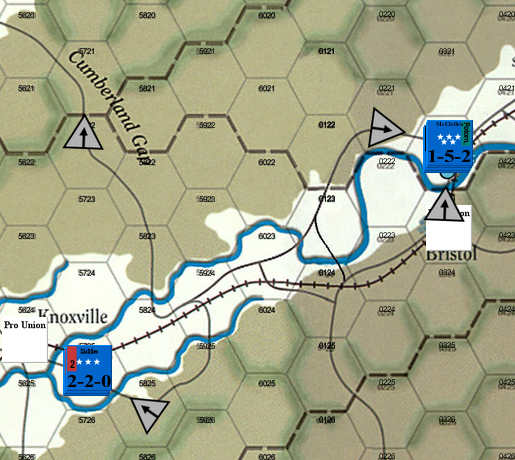 The race to conquer Tennessee is not yet finished. 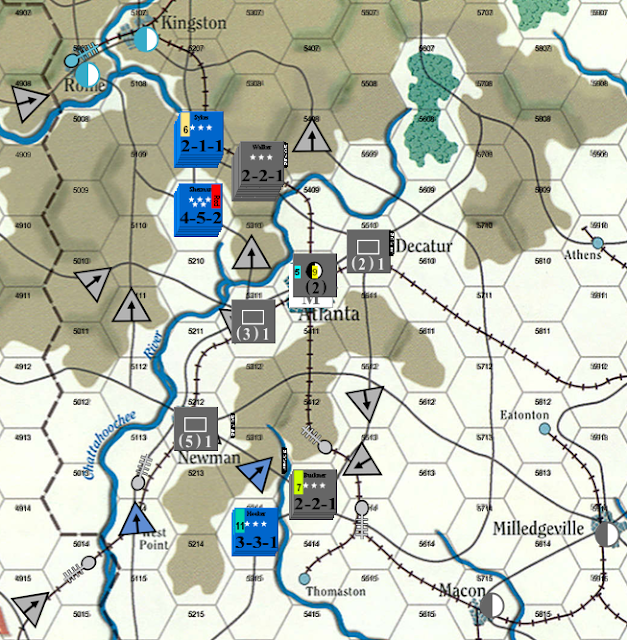 Atlanta is holding out. 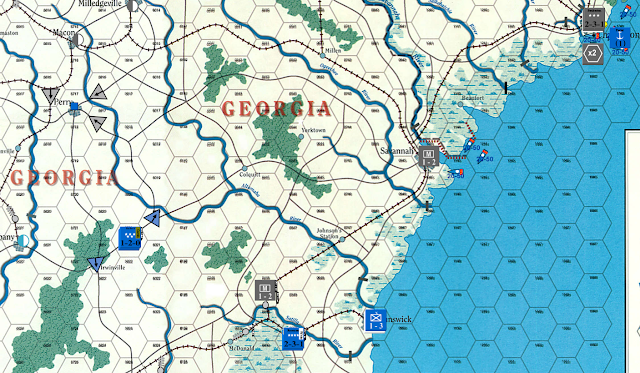 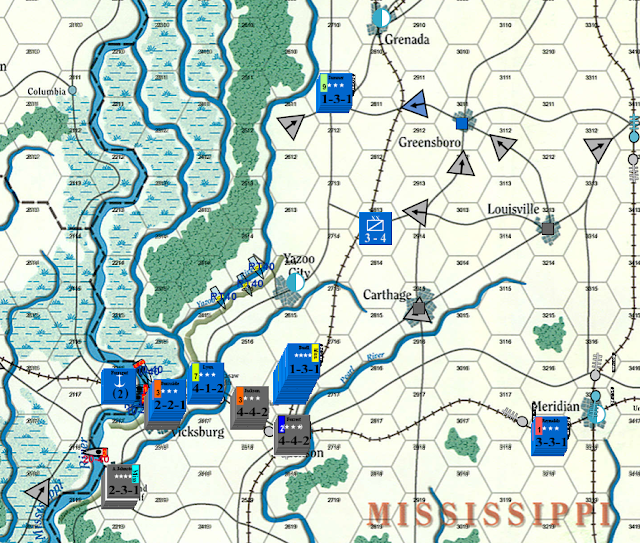 The Confederates continue to hold out in Mississippi.

Banks has been snookered.