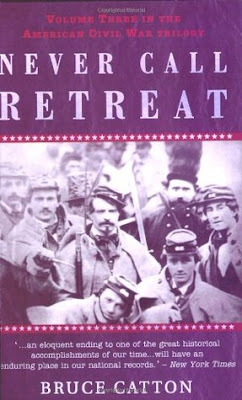 I have now finished Bruce Catton's trilogy of the ACW completed on the centenary of that event.  I slowed down my reading of the final book, first to try and keep pace with my War Between The States game and secondly because I was enjoying the book so much I wanted to make it last.

My reading of the fall of Richmond did coincide with that event in my game, but I've still got a way to go (having failed to immediately go after New Orleans when I started the game).  The book stops quiet suddenly with Lincoln's assassination which is rather poignant.

I would have liked a summary of what happened to all the key players after the war, particularly Sherman.  Luckily I have Wikipedia to help me out.

I'm currently watching the Ken Burns directed show The Vietnam War and there are possibly some interesting contrasts with that Civil War that the Americans stumbled into and then what seemed to become a political war rather than a military war.   So much destruction.  So much that could have been averted if wiser heads had prevailed (perhaps).

Having now read this trilogy I'm for leaving the statues etc in place, locking up those that would pervert them for their own causes/mischief, and educating us all so we can learn from the actions and mistakes of the past, in particular understanding the context in which  decisions were made.

I am very pleased that I have finally been able to read this set of books.  I can remember buying them many years ago and hoping that one day I would get them read.  I was also really pleased to be able to play War Between the States at the same time as it took both activities to a higher level of appreciation and enjoyment.