The Germans have taken the Ardennes and Brussels. They still have plenty of momentum to finish the conquest of Belgium and take the war to France. The Soviets are moving cautiously in their war against Iran (who have been bolstered by the Japanese).

1940 M/J – FINALLY SOME GERMAN SUCCESS
M/J and a new turn commences as rebase, production and reinforcement from the M/A turn is completed, US Entry enacted option 12 The Selective Service Act (No Tension) and option 18 with the US demanding the Azores, which created tension in the GERM Pool. In a peculiar state of affairs in the US there are no more Japanese options to be taken until their pool reaches 23 + when the US can take options 23, 24, 26 until then it will be quiet and the US has to just wait until they get extra chits in the Jap pool to attempt to create tension in the Jap pool to gear up – it is a challenge for the US Senate and Roosevelt, desperate to prepare for WAR! The US has however deemed to assist their Allies as their Huston oil fields come ‘on line’ and with the cancellation of the US-Italian LL agreement, they have an overabundance of oil with the US agreeing to lend 5 oil to France and 3 to the CMWTH.
The Axis roll a definitive 9 to win the initiative and take control of this turn and then rolls a nice 6 for clear weather in Europe except rain in N Monsoon (China is pleased) and then as predicted GERM declares a land offensive led by Von Rundstedt (13 O Points). They double two front-line arty Divs and supported by Stukas they GS the French and British frontline. Finally, a bit of luck for the GERM player as all the British Garrison in Brussels gets inverted and the point French hex in the Ardennes is mostly inverted. However, a GERM JU88 Bomber pays the price for flying without an escort and is shot down whilst the French lose another valuable FTR and its pilot. With the doubling effects of their largest units the GERM assault Brussels on a +14 rolling a 15 for an impressive 29 destroying two Corps (1 Brit and 1 Belg) – Brussels falls, in their second attack at a marginal +8 they roll even better with a 17 for a 25, again destroying two French Corps, and importantly taking the Ardennes hex. This impulse, it would seem that the dice gods were with the GERM as they advance without any loss or inversion. Italy takes a Combined and sails its fleet and two Tpts into the E Med and embark and then land two Corps and invade Cyprus capturing its resource. As predicted Italy has chosen an Egypt first policy which the CMWLTH suspected was going to be their theatre of choice – he has made some preparations. Japan also takes a combined and reinforces China, but with rain in the N Monsoon they elect to only attack the lone rear-guard Nationalist INF DIv at some outrageous odds that don’t even require a dice roll. There are no other Jap attacks as their bombers fail their GS – not unexpected as they are rolling on 1’s and 2’s. A long GERM turn as there was a lot to do coordinating their land offensive and exploiting their success.
Allied first impulse saw a Combined by the CMWLTH as they pull HQ Gort back from Norway to France and Wavell sets its headquarters back up in Lille. Germany’s venerable BS Schleswig Holstein patrolling in the North Sea attempts to intercept the British Tpt, but fails and is subsequently found by the CV Courageous air group and sunk with all hands. The British bombers GS the GERM front line units and ALL fail, not a single inversion – the French Arty in Metz is more successful inverting both GERM lead ARM units in the Ardennes – nice rolling Frenchie. The British and French shuffle their front lines to await the next assault and pray for bad weather. Russia takes a no cost Combined as it moves ARM toward Tehran and in China, a few units move forward as the now Elite and veteran Chinese air-force flies North to where the clear weather and the action is likely to be. The Chinese partisan unit outside Shanghai – goes berserk and launches an assault against the Jap Mech Div (2.5) at 1:2, the Japanese panic, and fearing a high roll and a possible exchange fly two bombers in support to shift the odds to a 1:4 – the partisans smash themselves against the tiny tanks/armd cars and are eliminated, although the Chinese player is elated as that means two Jap bombers won’t be GS the Chinese next impulse.
Second Impulse and the Allies prayers are answered by the weather Gods with a rainy 2 rolled for weather and storm in the N Monsoon – the Chinese are pleased. However, the +2 on the next weather roll will mean that it will be clear in France and temperate China for the Axis 3rd impulse. In rain, the GERM takes a no cost land to shuffle units forward in the mud and reinverts the two flipped lead ARM Units in the Ardennes. The only good news here is that the initiative will advance by two meaning the EOT rolls will commence a little earlier – the AXIS can end the turn on their next impulse if they roll a 1! The other bonus is that 3 of the 4 GERM HQs are currently flipped which is always reassuring although the GERM still has O-Points if needed. Italy takes a no cost land and advances towards Alexandria – only stopped by an Egyptian 4 factor TER on the coast, the 2nd ITAL Nav rebases to Egypt to threaten the British supply in the Red sea. Japan takes a combined and lands more units in China and with rain and storm takes no further action.
Allied Impulse next week – the CMWLTH will almost certainly take a naval to challenge the Italian dominance in the W Med as all their NAV air has flown and the British CVs and the RN are keen to teach Mussolini a lesson or two. Russia may ‘have another go’ at Tehran although they are in no hurry any more, although it would be nice to grab that Persian oil rather than gift it to the Japanese each turn. 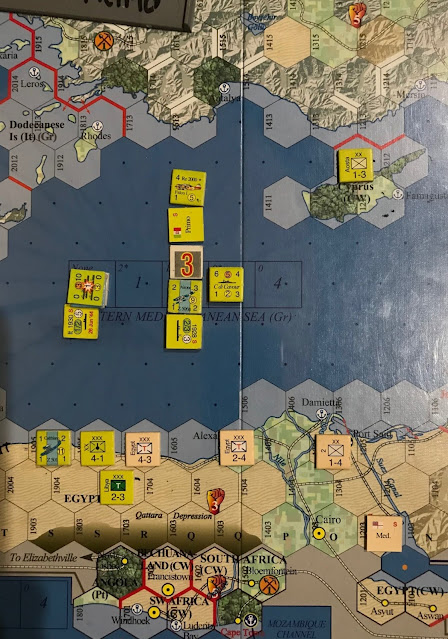 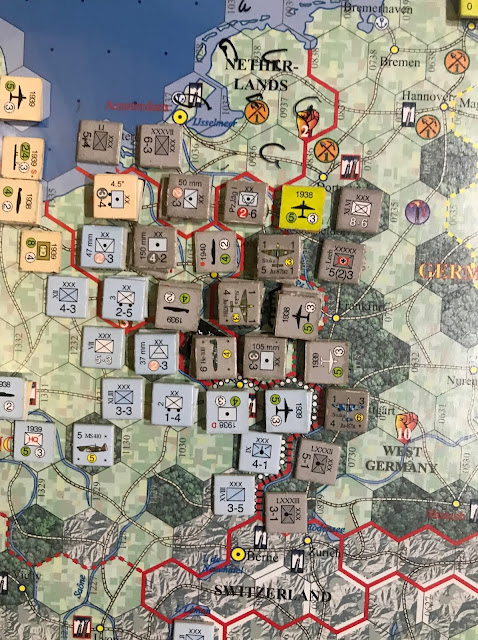 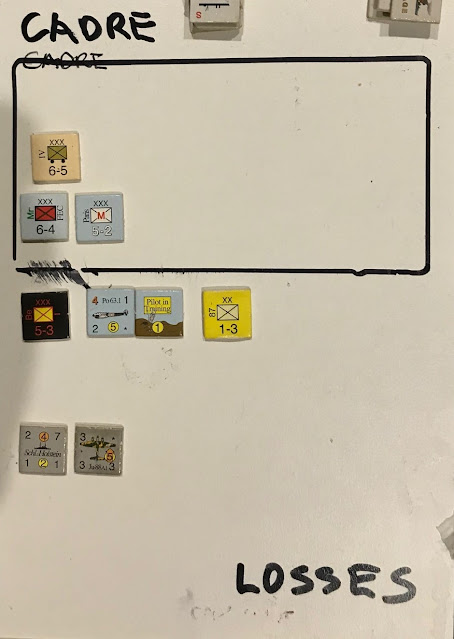 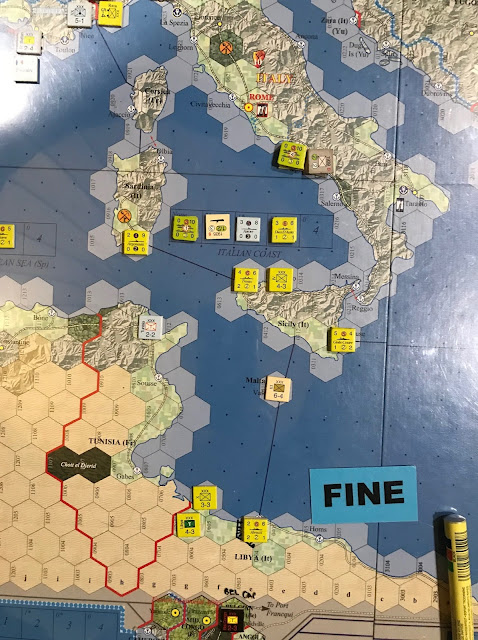 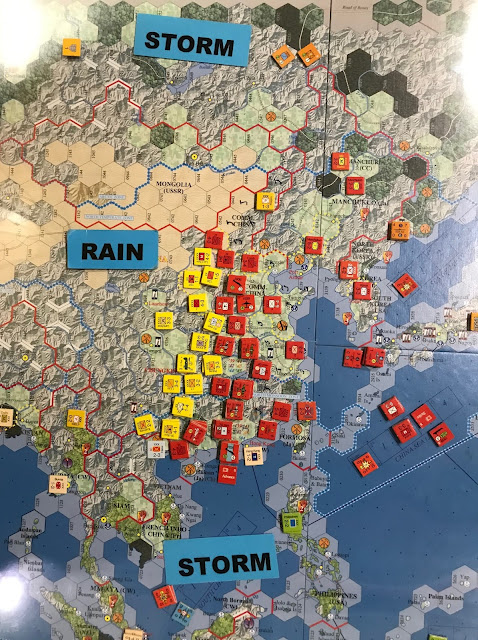 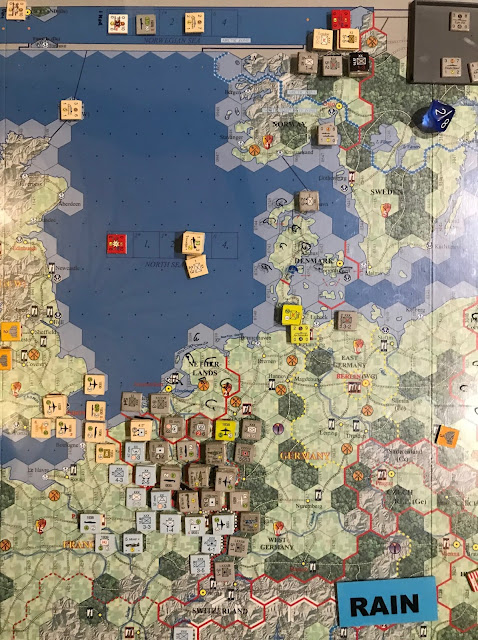 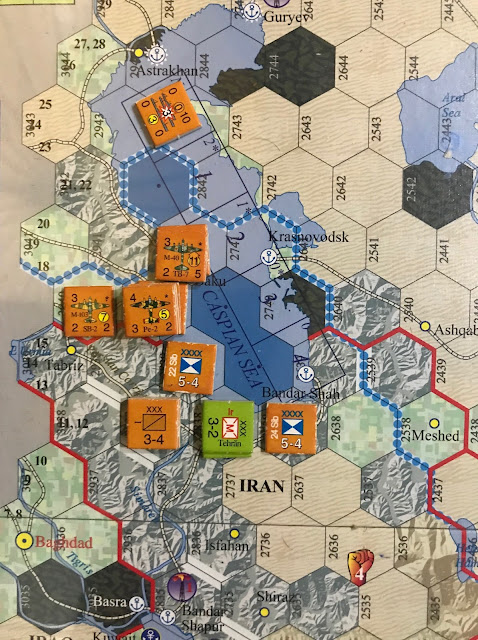 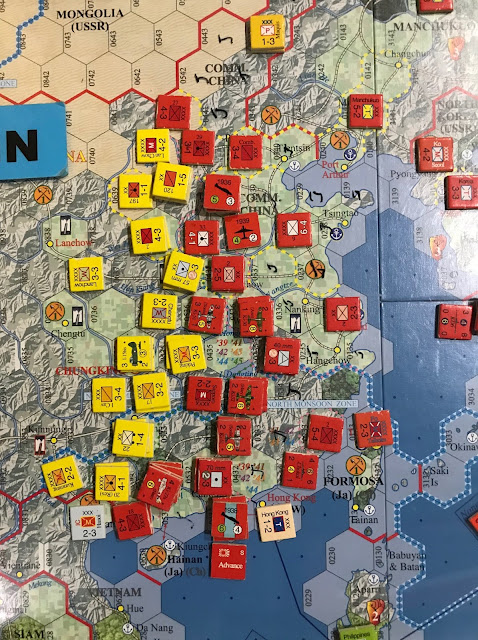