After the success of the 6mm game a few weeks back, I wanted to see what I could do with my armies to put on a multiplayer game using Basic Impetus.

Doubling the armies turned out to be easily achieved with the Byzantine and Carthaginian figures I have.

Geoff and I took control of the Byzantines against Dave, Richard and Russell who had command of the Carthaginians. 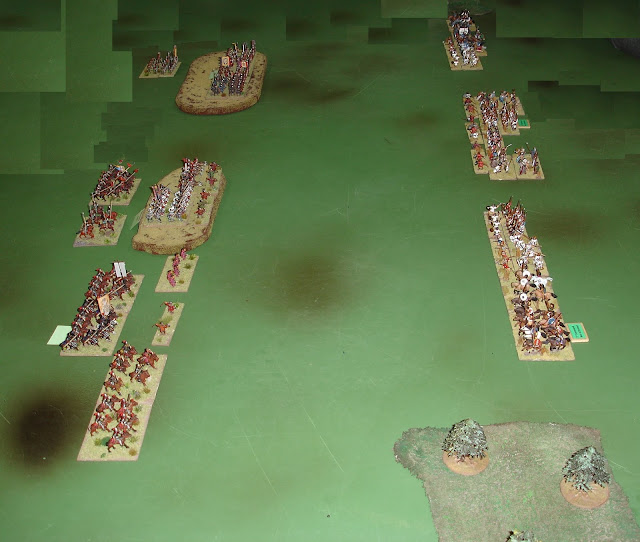 Deployment was to our favour and we massed our superior (or so we thought) cavalry on our right,
ready to monster the enemy and turn their flank.
Note: there was a lot of clutter on the table which I have attempted to edit out.

Things started well.  On the left we pulled back our infantry behind the crest
while our cavalry went racing forward, showering the enemy in arrows.

Turn 2 and things are looking good.
It will take a long time for the Carthaginian foot to get to grips,
by then our cavalry will have destroyed their right flank and be sweeping round behind them!

Turn 3 sees a turn for the worse.
One of our cavalry units is routed and while the rest is heavily engaged.

Turn 4 saw some progress, but at significant cost.
The delay has also meant the Carthaginian foot has started to close.

Turn 5.
That must be a tear on the lens, as it was indeed crying time.

The penultimate image before the collapse of the Byzantine left flank.
The infantry had done an amazing job of passing their cohesion tests.
They were also able to rout the Carthaginian light cavalry that had launched a flank attack. 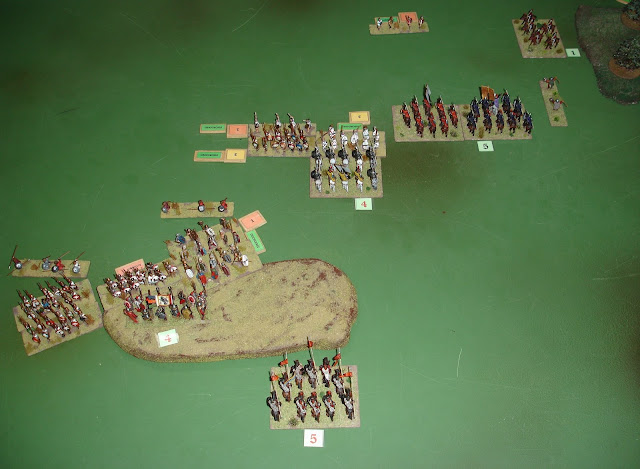 The Byzantine right saw the rout of the Carthaginians,
but by this stage accumulated losses had pushed the Byzantine army to breaking point.
A great game!
Posted by Sun of York at 10:32 PM