The last flight for the year. 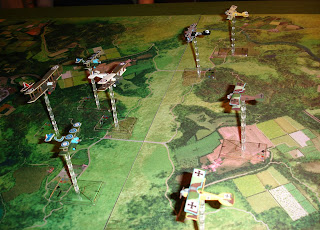 On the British side we had Mark B in control of a Bristol Fighter and Sopwith Camel, Steve B with another Bristol Fighter (the one with the complete paint job) and Matthew in another Camel, identical to the other one (some kind of camouflage technique perhaps) in the top left hand corner.  Facing them were Stephen N with two Albatross DIIs (top right) and myself with two more Albatross DIIs. 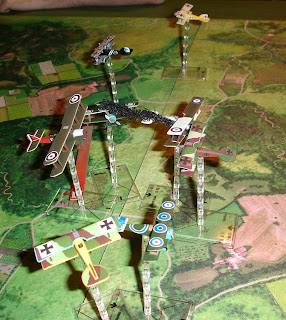 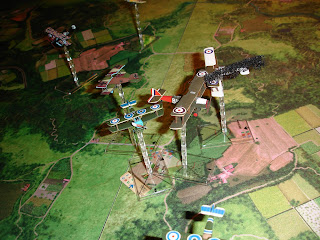 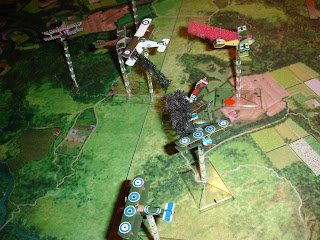 The Bristol Fighter does not survive - credit for the kill goes to the Matthew's Camel. 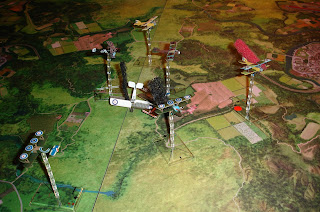 One of my Albatross DIIs is now on fire and is weaving its way back to base.  Mark B's Bristol fighter blows up. 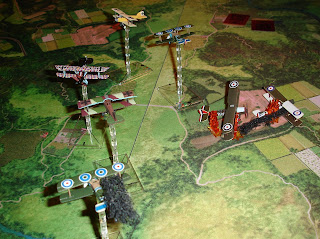 The fighting goes on.  Mathew's Camel is making an escape covered by Mark B's Camel.  My remaining Albatross mistakes a right for a left and gets tailed.  It does not end well. 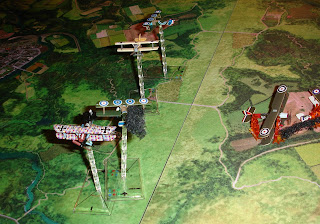 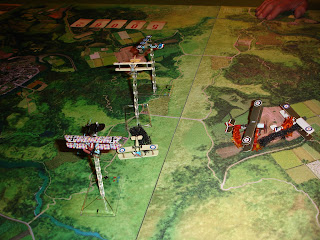 And take out Mark B's Camel.  Matthew makes a getaway and displays his damage.  There is an 8 in there from the collision.  Ouch.

My flaming Albatross made good its escape, so it was a 3:1 victory for the Germans.

I am not updating the leader board as it was getting embarrassing.

Thanks Stephen N for organising all the Wings of Glory games at the club this year, they have been fun.