Kiev to Rostov via Vassal - GT76 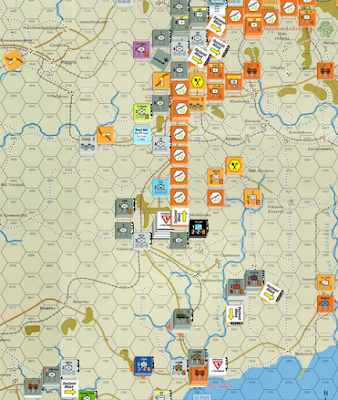 The attacks in the south are just mopping up or rather clearing road blocks.  The Axis are playing it safe with their weakened panzer divisions.  However the attacks in the north have the potential to be decisive.

The Axis have bashed a sizeable hole to the immediate north east of Stalino.  The Soviets have decided to hold on rather than retreat.  There is an increase risk of losses to the Axis if they attack fortifications and the Soviets know the Axis are running low on troops, or so Stalin tells them.

The Soviets have pulled back in the south and are clearly stretched,  They are hoping for bad weather to give them time to rebuild and to keep the panzers away.  The Axis have surrounded Mariupol.  More importantly they have been able to bring their supply lines up, the last three turns of relatively good weather has allowed the railway lines to be converted at an impressive rate.