23-24 November (GT78) continued snowing.  This gave the Axis time to complete the recapture of Mariupol and to continue shrinking the area around Stalino, ultimately forming a pocket of trapped Soviet troops there.  Has the snow given the Soviets enough time to prepare the defences of Rostov? 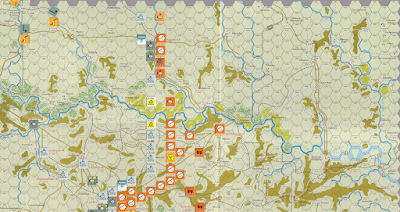 All quiet in the northern sector.

The action is all down south.

The Axis look like they are preparing for more attacks on Melitopol.

GT79 is frost and the panzers get moving, but the fighting is still bloody with losses high, even though the Axis are being careful and then I find this: 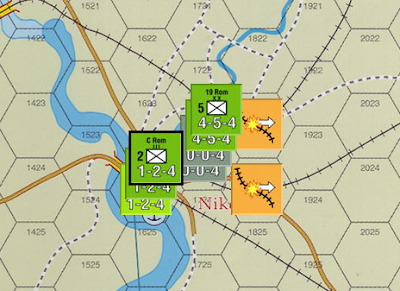 Reinforcements brought on in GT63 and forgotten about with the holiday interrupt.  Using the road and accounting for the weather they should have been in operation around Melitopol around GT71.  I will start moving them there now.  Not sure how significant this omission has been, possibly not that much (attacks at 2:1 would have been at 3:1 which is not all that significant, however this force would have allowed the Axis to continue attacking and that might have made a difference.

The reinforcements get underway.  Maybe they had been halted to fight partisans?

The roads to Rostov.

The Axis have captured half of the city of Stalino as the Soviets pull back to form yet another defensive line as well as send reinforcements to Rostov.

There are six turns left and the weather report is not good.