Kiev to Rostov via Vassal - GT81

In what might be the last fine weather (although frosty) turn of the game, the Axis make a big attack.  The Soviet forces are so reduced this just might be the breakthrough the Axis need to reach Rostov. 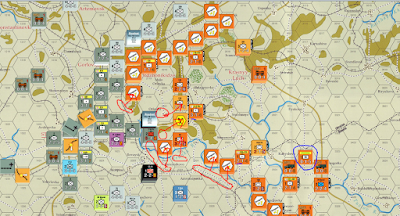 The attacks were carefully planned.  The Axis even attempted to interdict the Soviet HQ. 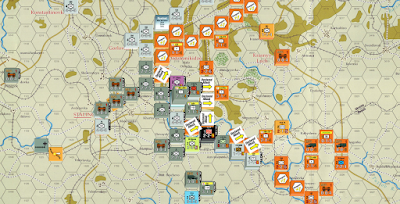 The plan was successfully executed.

And the result has been a huge hole in the Soviet defences. 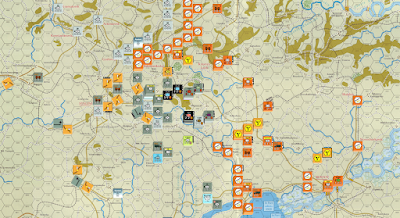 The Soviets responded by pulling back and commenced constructing more strongpoints.

The Soviets are very short of troops.  Most units are only 2 factors and therefore vulnerable to Axis overruns.  It hasn't helped that Soviet high command has still been calling for reinforcements to be sent to the Moscow front.  However the Soviets have weather, distance and reduced Axis attack supply in their favour.  Will it be enough to last four turns?