Kiev to Rostov via Vassal - GT77

It snowed, but the Axis were prepared. 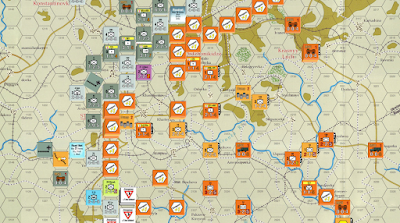 The Axis continue attacks to the north and south of Stalino.  The Soviets hope it can hold out long enough for them to build a second line of defence.  The Axis need to capture Stalino as it is an important road and rail hub.

The initial attack on Mariupol by the panzer divisions is successful, but not decisive.  However it is isolated and will fall.  Has the delay been enough to stop the Axis getting to Rostov?

The Axis are playing cautiously.  The troops with emergency supplies have been pulled back so that next turn, regardless of the weather, they will be in supply.  Earlier on the Axis had units sitting around doing nothing due to fuel shortages.  If they had been held back perhaps Melitopol would have been captured by now...