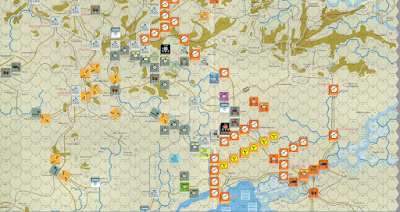 End of GT83, the Axis are still attacking, but the Soviet defences are never ending. 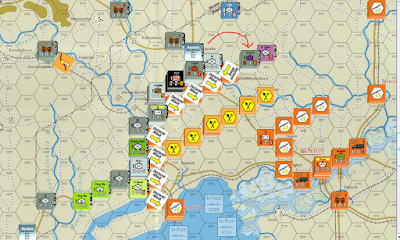 The supposedly good weather on GT84 gave the Axis their last chance and they attacked all along the line. 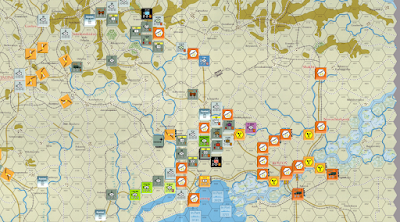 It was a success, but they are still too far from Rostov.

It was then I had cause to check the fine print on the weather table.  I was looking to see what the chance of frost was - 20%.  Then I saw the note: need two consecutive turns of frost to undo the effects of snow ("lingering snow" is the term they use).  As the first snow was GT73, the Axis had four frost turns that should have been snow.  The illegal frosty weather was what allowed the Axis to shift the panzers to strike south of Stalino.  So it goes - it was fun.

The Axis were sitting on 106 Victory Points giving them a Axis Operational level (range 96 to 126).  Given they had cheated, I'll downgrade that to Axis Marginal (range 75 to 95).

Apart from the weather, the main handicap the Axis had was I failed to get all the panzer divisions moving as soon as I could.  I should have made that the main priority.

Unfortunately I failed to blog the early moves.  In fact posting about the game has been an unexpected source of extra enjoyment in playing it.

Great game.  Massive undertaking made possible by Vassal.  Fabulous boardgame and to think you can link it with others in the GMT Barbarossa series to make an even bigger game - Wow!