S/O 43 AXIS NEARLY GET THE TRIFECTA - THE INITIATIVE, BAD WEATHER AND EOT

The Allied first impulse of what is trending to be an “all Axis show” was the CW and Russia taking Air Actions, China a paid Land and the US a combined. With few options for land combat, except in N Africa the multiple air actions was for the Russian an attempt to push low odds GS in rain and rebase and reinvert the bulk of his air-force. The CW elected an air to continue the air war in the W Med, fly protective air cover in the N Sea, Baltic and like the Russian, fly low odds GS in rain against GERM targets in Norway. Naval searches in the Baltic, W and E Med followed last sessions trend with three rolls of 7’s – no finds – all missed, needing 3’s and 4’s the subsequent GS in Norway also all missed, Russia’s attempt to strike the line was similarly poor, made slightly worse with the loss of his best Sturmovik and its pilot. In N Africa the CW had better success with ‘the’ big ARM (9.6) stack in Algeria becoming all inverted and in Egypt, a lucky 2 rolled inverted the Italian HQ. A long range strat bomber from the UK ranged hundred on miles to bomb Milan and rolled a 10! Disrupting the entire cities production – 3 factories – the city must have left its lights on – don’t they know there is a war on. With Russia and the CW taking air actions, no land attacks, just rebases and reinversions using HQ’s and air transports. The US naval moves saw the CV Hornet, a Tpt and 2 x CA’s dynamic move to the newly captured Norwegian port of Kristiansand and also sail a Tpt into the N Sea to guarantee supply to the Norwegian expedition. Two CV’s the Hornet II, its paint still wet and the Wasp arrive from Washington into the Azores to support the ‘Europe First’ policy that has been agreed by the Allies. In the Far East, with bad weather there is little action as speculative GS by Chinese Arty and Acft, again in rain fail in their attempt to invert OOS Japanese units – only a single Div is inverted – no attacks. Impulse marker goes up 2.

Axis 2nd impulse, and Lady luck continues to offer a helping hand to the Axis cause, favouring them again with another bad weather roll - 8 (7+1) - same weather as the 1st impulse - rain and storm. The Axis players are pleased as the 50% chance of clear weather that was on the cards has been avoided twice and now the Allies have a chance to end the turn on their 2nd impulse. Germany takes a land, Italy and Japan take combines. Japanese CVs sail into the zero box and attempt GS against Vladivostok with no success, the CA Kinugasa sails into the Marianas hunting a conv but fails to find its quarry in the storm. In S China, in an attempt to shorten its line in the South, the Japanese Army vacate Canton and march North back into supply. Italy sails a small fleet, escorting a Tpt into the W Med loaded with pasta and vino to supply the beleaguered forces in Egypt – the Allies search and roll another 7 - disappointingly consistent – now 4 searches of 7 in a row for the Allies, so no finds – the Axis are delighted. GERM

Allied 2nd Impulse and potential EOT. The US takes a Naval recognising it may be its last impulse and ships Acft from the US and rebases SCS/CV’s in the Pacific. The Tpt now becomes a Service Squadron which flips over and upgrades the port of Kristiansand – now holds 14 ships. Searches in the Baltic fail again with another 7, in the E Med a 9 and the French CA in the W Med rolls a 6 – all fail! Now 7 searches and 7 fails – the Allies are becoming quite frustrated as with out the finds on the supposedly tenuous supply lines, attacking the ‘in supply’ land units significantly increase the loss potential and gives the Axis manoeuvre options. CW takes a Comb and sails the Home Fleet into the N Sea and drops off another Mot Corps and advance units to occupy Trondheim and several Mountain hexes vacated by the withdrawing Germ army of Norway. Aircraft are rebased to react to a search by the GERM in the N Sea as this is now becoming an important Theatre of Operations. Little action in China, as the continuing poor weather limits attack opportunities. Russia takes a land to strategic move several important land units before the EOT and attempts further GS to ‘shake the tree’ some minor success but the only attack opportunity is well covered by massed Axis air so no Allied attacks. Allies roll for the EOT and roll a 9, sighs emanate from the Allied commanders, Impulse marker advances another 2.

Session ends with the Axis 3rd impulse weather roll and it’s a 1! Clear weather everywhere! The EOT roll is a 3, with a possible 5 for the Axis if they all pass next week which will give the Axis the Trifecta - initiative, bad weather and a very short, 2 impulse turn. The only issue for the Axis is that the GERM has only the minimum of forces in Norway – just enough Corps to form a single double stacked line hinged on Oslo. If the Axis fail to roll the EOT then the Allies will pick off several Corps in the clear weather and the Axis will lose this last opportunity to withdraw in good order and form that double stacked ‘Oslo line’ in Norway (see pictures). In addition, the Italians may want to send a Conv to the E Med to keep Egypt in supply rather than risk leaving out its last Tpt, which will have to drop down to the 1 box. So, it will be more than likely that the Axis will move and push their luck on rolling a 3 or less to end the turn with the Allies desperately hoping they don’t so that can get to some action in what has been frankly an abysmal turn for the Allies, which conversely means an excellent turn for the Axis. 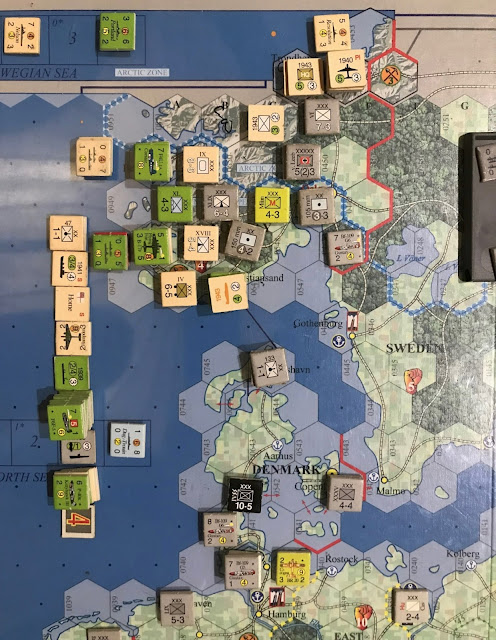 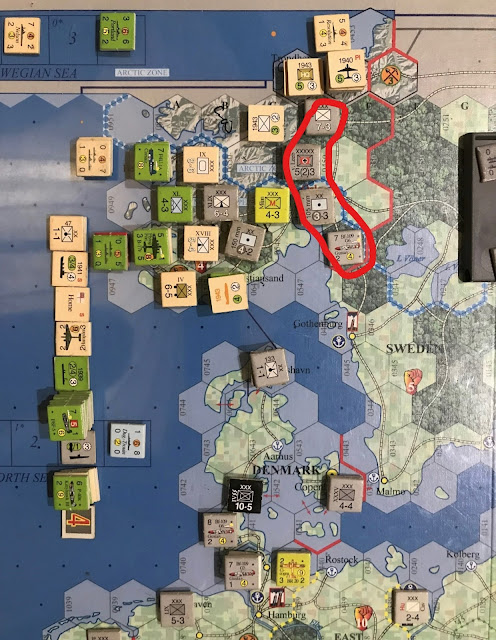 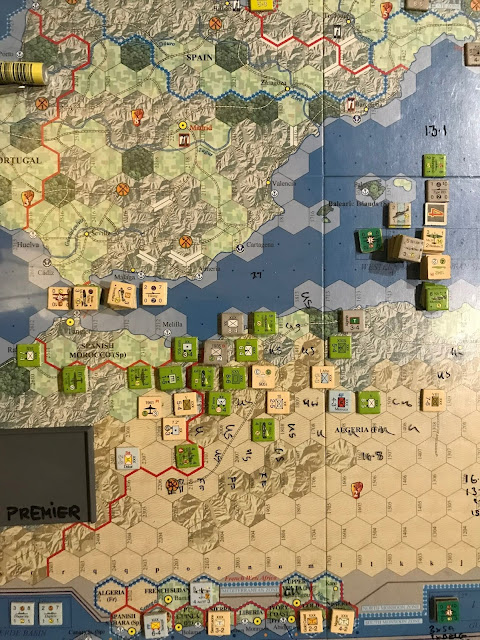 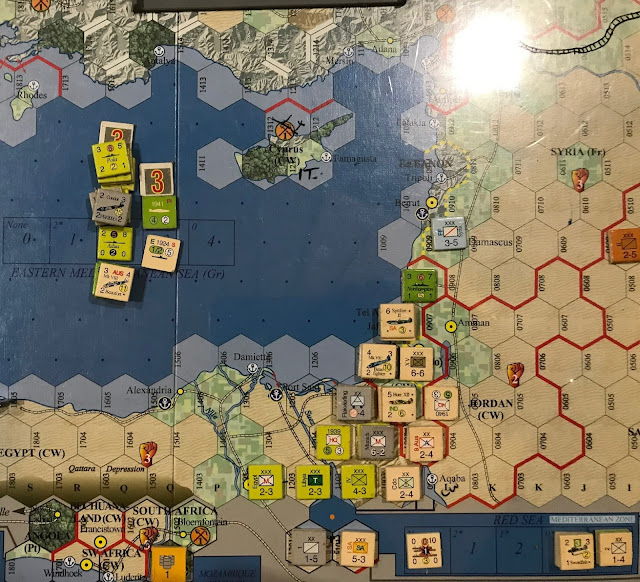 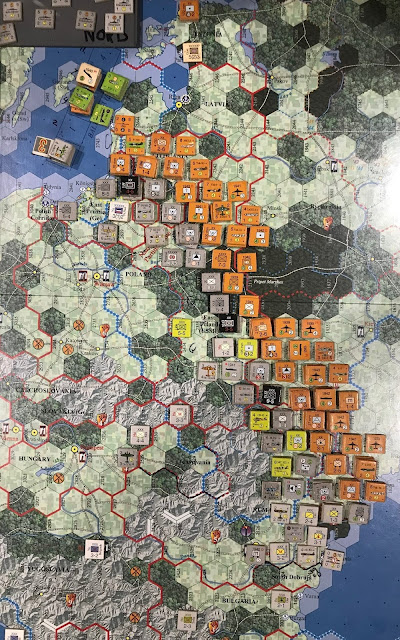 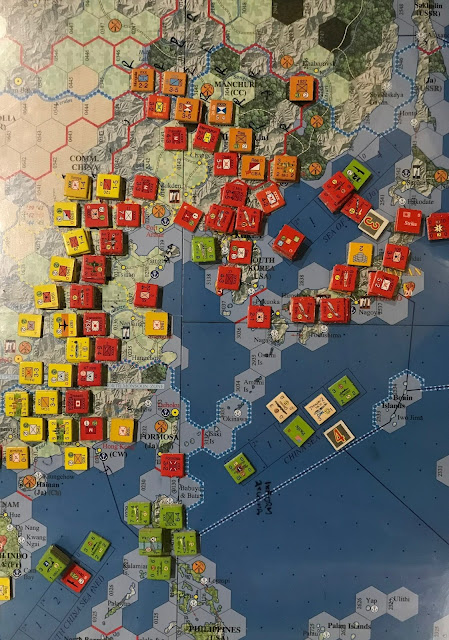 Storm and Rain - little is happening here although the Japanese, desperate to shorten its front line against mounting pressure evacuate Canton 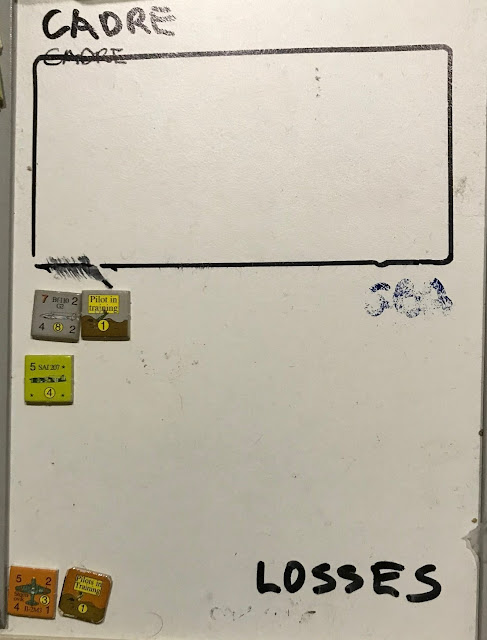