Some more units for my Arab Conquest armies

Can't believe it was April when I last added to this collection.  I am now down to the final figures of the purchase, although there is still a bit of cavalry to repair and rebase.  Here are two more units of archers and one of slingers all based for Impetus as T and S troops respectively. 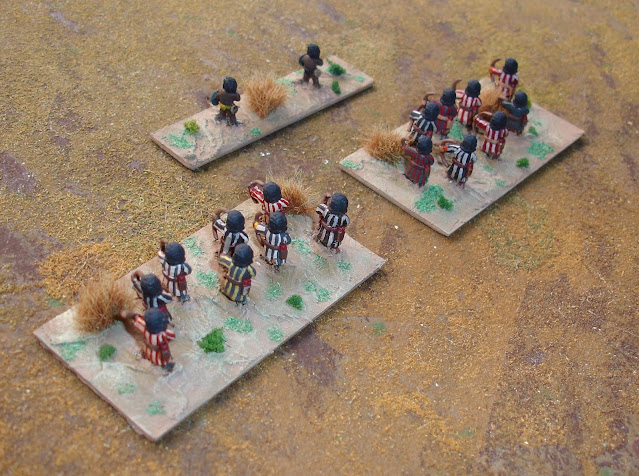 The Ancient & Medieval Wargaming group on Facebook helped me identify the figures as Mike's Models.  A bit of further investigation and I would suggest the slingers are AP71 Berber slinger and the archers AP67 Arab archer.  One wag in the group suggested that the archers are wearing "the new strip for Newcastle United and will in time be Sunderlands away strip".

In doing a final edit on this post I find that my use of the term "wag" which I meant as young chap or gossip (and think I heard it in Life of Brian, but by Pontius Pilate who had problems with his r's so maybe it was "rag").  I now find it means "wives and girlfriends" which I suppose links back to the football comment.  Learning all the time (which is a quote from Benny Hill).