War Between The States - What is being reported in the Press?

After his magnificent advance on Fort Monroe, General Forrest was accused of cowardice when he deserted his troops after they were cut-off.  His claim that he escaped with nothing but his cigars, is yet to be confirmed.  He will of course attempt to lead a relief effort.  Using a mock Austrian accent he was heard to say “I’ll be back”.

President Davis flew into a rage when informed that political opinion no longer saw the capture of additional Union forts as being of much consequence.

The war has been great for the New York social scene.  It is reported that the paper’s social pages are avidly followed in the Southern states and that the readership is much impressed by the fine cut of the Union Generals’ uniforms.  Some enterprising Southern entrepreneurs are sending cotton north, carefully labelled as Free Cotton, and certified as picked only by the finest hands (colour not specified) in the hope that the Union General’s can have some additional uniforms made so that they can continue to party.  Apparently a condition is that any uniforms incorporating so much as a single thread of the gifted cotton can only be worn in the North.

The large number of war correspondents assembled at General McClellan’s HQs have nothing to report.

Observations that McDowell’s HQ has been a hive of activity are difficult to believe.

In the weekly addition of this popular monthly periodical there is an opinion piece on the growing trend for people to head south to get away from the cold Northern winter.

General Butler, the Bugle’s three star reporter, proprietor and total readership, has produced the following detailed analysis of the situation at Fort Monroe.

With the supply phase upon coming up, the Garrison have a 1 in 12 chance of succumbing to hunger.  It should be noted that on the two preceding supply phases the Garrison proved to be big eaters, is this a trend or was it preparation/premonition?

The Reb besieging force and the covering force each have a 1 in 9 chance of fading away to nothing.  There is a 2 in 9 chance for each of them just to suffer heavy losses.

Once past the supply phase it then comes down to who gets initiative, with the big issue being who wants to escalate this campaign in the Peninsula? 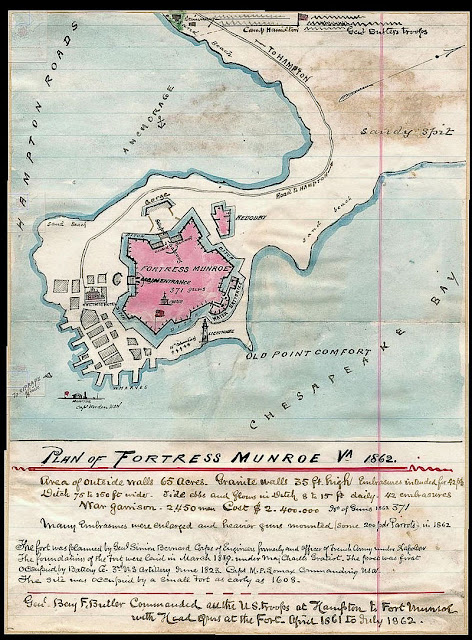