When Simon and I started to play War Between The States I was struck by my imperfect knowledge as to the causes of the American Civil War and the ill-preparedness of the two sides. 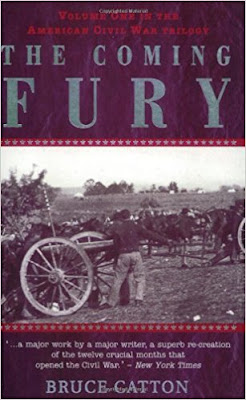 Years ago (probably decades) I had purchased the three volume set by Bruce Catton on the American Civil War.  Now was the time to read it, at least the first volume which I hoped would give me the background and understanding I needed.  It did. 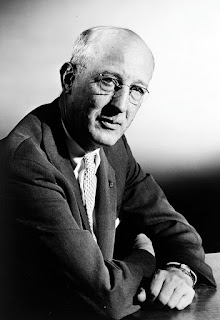 Bruce Catton portrait from the 1960s, Library of Congress

The book was written a hundred years after the war (and I liked the synergy that I was reading it fifty years after it was published).  This has allowed plenty of time for analysis, research and the dissipation of bias to occur, to give me confidence that what was written was accurate (as far as these things can be). Whenever in doubt Bruce stated so and also included a few diversions into what might have been at the various early stages of the war: some profound (Texan's imprisoning Lee) or perhaps not as significant as they otherwise seem (events around Fort Sumter - it was merely one of many matches that would have ignited the tinderbox of public/political opinion).

The real catalyst seemed to have been the election of the Republican President Lincoln.  This had South Carolina seceding almost immediately.  That he was elected was helped by the Democrat Party meeting in the same state that had resulted in the party splitting and running two candidates.  My takeaway from the book is that the South Carolinians wanted to preserve their way of life, by stopping even the remotest chance of change.  And of course by way of life that meant slavery.  I was surprised to discover that some of the opposition to slavery was just opposition to coloured folk. There was also the belief that the industry of the South, i.e. cotton, could only be supported by the use of slaves.  This is of course nonsense and was just a distortion of a working man's worth something that I felt was still ongoing in the 1930s based on my recent reading of The Grapes of Wrath and I reckon continues today, but I'm getting well off topic (except that I reckon the initial use of slave labour in the Americas has an ongoing effect with industrial relations with bosses not valuing their workforce).

Then it was all State pride and the folly of old white men (and some young ones too) ably supported by their women folk.

My reading of the start of the Spanish Civil War (via Anthony Beevor's complex book) was a similar overheating of public/political discourse boiling over in to open and vicious violence amongst otherwise civil human beings.  Perhaps that is the case with most wars.  I am remembered of the quote that "war is an extension of diplomacy by other means".  You could say that Germany didn't invade Poland in 1939, it was just being diplomatic.

The other, more disturbing observation is the similarities to some of the world's current political dynamics, notably Brexit and the recent US elections.  There would not appear to be the moral issue of that "peculiar institution" to fire up people's passion today, but there is the mounting divide between haves and have nots and that is a well trod path to revolution. Climate change may also be a sleeper issue as the effects become more wide felt and blame begins to levelled.

I really enjoyed this book.  My limited knowledge of the US and its political structure made the first part a little challenging, but I was able to follow it without too much "who was that again?"  The style is rich and rewarding.  There is humour and sad reflection over various events and lost opportunities.

Once secession commences the book picks up pace covering everything that was happening and the snowballing effect, particularly on how it all hardened each side's opposition to the other and (of course aided by hindsight) on how bloody an affair it was going to be.

As to my question of both sides being ill-prepared?  The talk of secession was considered a political move.  No one thought of the consequences and this was further, almost delightfully, mixed up in consideration of what was legal.  Secondly the US army had been very much run down.  The Southern aristocracy (which tells you something that such a term could be used to describe them) may have had more of their people at West Point, but they had less people and to me, where they needed or would have had the manpower supporting their industry or rather agriculture (i.e. cotton) they used slaves.  The North had the business men (good and bad) and the industry (railways, shipbuilding, and attendant iron works etc) and an abundant workforce supporting them that was not enslaved.

There is an unreferenced unattributed chart that appears in the back of the book giving the 1860 population numbers and industry establishments.  It is very telling: 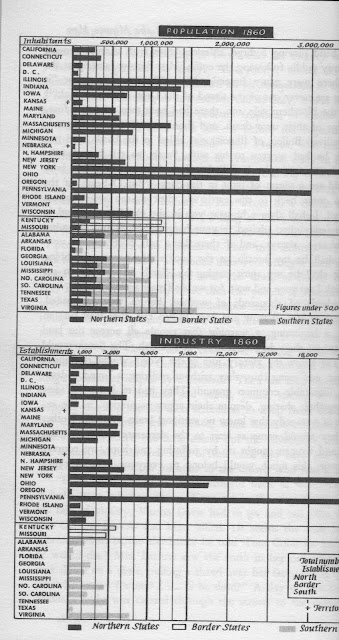 For those who prefer numbers I found this, a JPEG with the delightful name of Statepops: 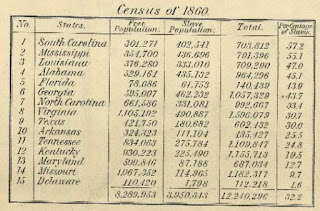 There were those who foresaw the rising tide: moderates who formed committees to further discuss the issues and look for compromise and military men who called for reinforcements (and I was surprised to learn that General Scott was so prescient, but was not heeded as his advice cut across the politics of the time - I'm guessing similar such foresight existed in the Generals prior to the recent Middle East wars and was equally ignored by the politicians of the time as being "unhelpful"). 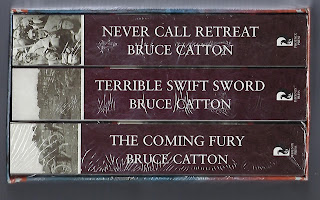 I am looking forward to reading the next volumes, but will have a little rest first.

Email ThisBlogThis!Share to TwitterShare to FacebookShare to Pinterest
Labels: ACW, Book Review, War Between The States