Stephen and I are in a PBeM Wings of Glory game which is a bombing mission so we thought for tonight's game we would get in some much needed practice. 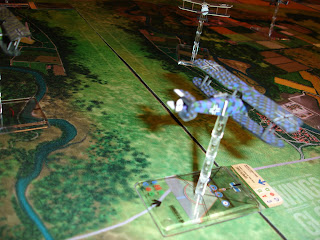 It got off to a very bad start when my Hannover CL.IIIA collided with one of the Sopwith defenders (flown by Greg). 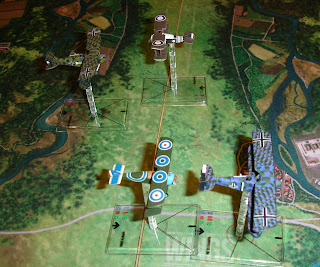 Then he got on my tail - I had dived so even though our bases overlapped we were still able to exchange fire. 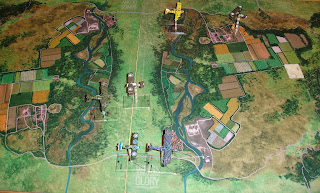 Everyone is shooting.  The target seems a long way away. 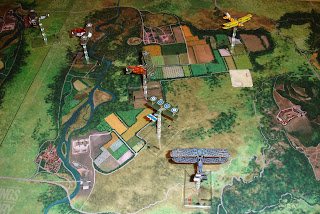 Ah ha!  Escaped and ready to begin my bombing approach as the two other German bombers flown by Stephen zero in as well.  The Sopwith flown by Mark B is in flames while the one piloted by Mathew hangs back, hoping to get us on the return. 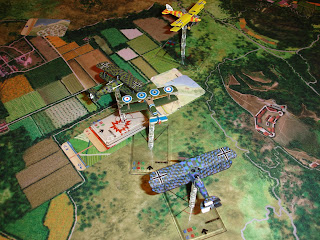 Stephen's bombs fall wide and worse he is shot to pieces with Greg getting the killing blow. 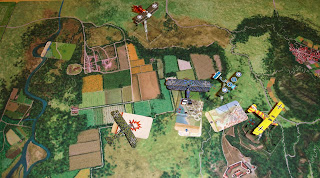 I dived down to 2,000 feet and dropped my bombs.  Mission accomplished, but would my plane make it back? 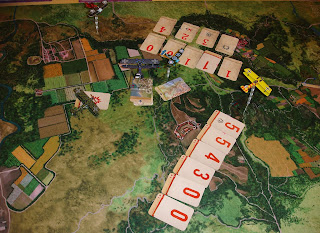 Stephen's second bomber is shot down, but not without getting revenge with Greg's plane blowing up. 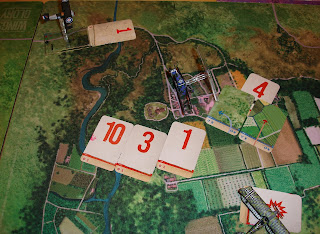 I do a sharp turn for home and my plane falls apart under the stress (two steep moves in a row necessitate the drawing of a damage card which took me over the limit of my planes endurance).  Note the "10" which was caused by the collision.

I think Mark B's flaming Sopwith survived and Matthew was doing fine with only one hit.

Out with the unofficial leader-board.  I attributed both of Stephen's deaths to Greg.  Mine was self inflicted, but I didn't give myself any credit for it. 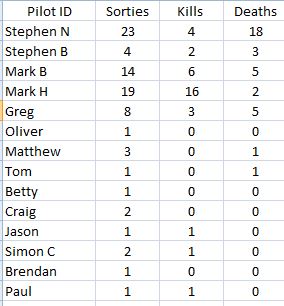