Modern, as in post WW2, wargame subjects tend not to be my favourite and the more current they are the less so.  I think it is a childhood thing - I'm reliving my youth.  Anyway, Richard hosted this game which is based on the most recent Afghan war/occupation/intervention call it what you will, but not special military operation.

A distant plain is a four player game and we had Jeff as the Taliban, Simon as the Warlord, Richard as the Coalition and myself as the Government.

A distant plain is a challenging game.  It is quiet a different type of game, being a mix of diplomacy, card play and combat.  This complexity is not helped by some of the rules and card descriptions being a bit difficult to follow.  Good thing we had four brains at our disposal.  Also this was our first play. 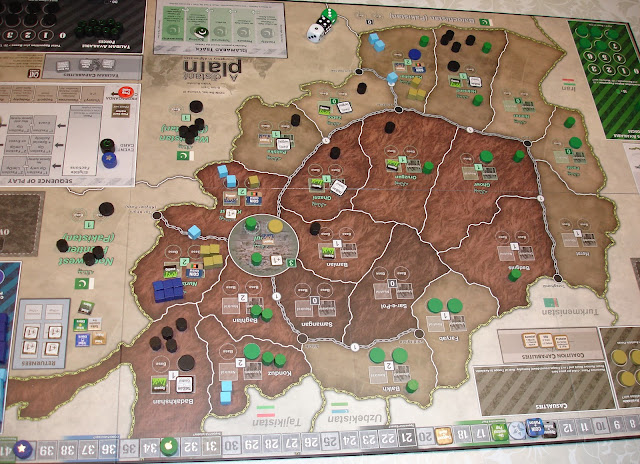 Things can change quickly and here we see the Warlords have taken control of Kabul,
although only momentarily 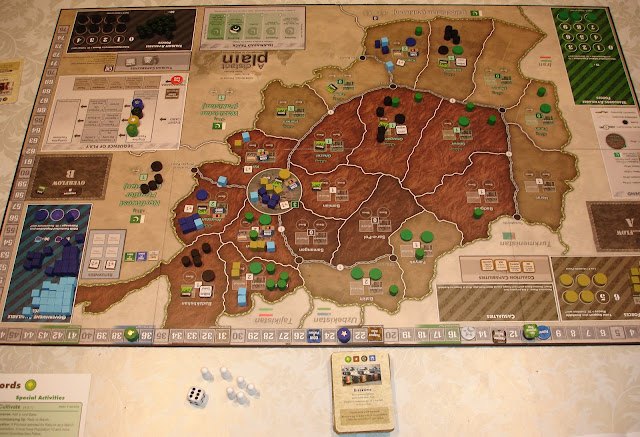 The situation when we broke for lunch 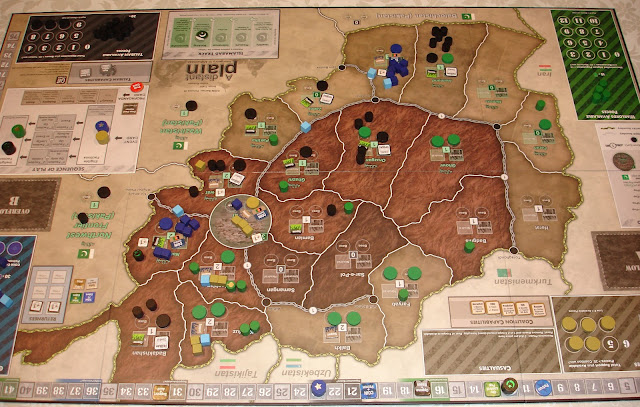 The situation at end after about five to six hours play and we had to call it quits.
The Coalition would have won at this point if the game had formally ended.

What follows are some observations by the Coalition player.

Four things that went against the Government:

1. The really long turn where Government resources ran down.

2. The Taliban card stopping the Coalition being able to assault which really shielded the Warlords.

3. The Manpads shielding both the Taliban and Warlords from airstrikes.

Everyone was very close at the end, even so.

The Government/Coalition were on a roll right up until the Coalition wasn't able to assault (the Taliban Talks card) or use air strikes effectively (Manpads). At that stage the obvious target was the Warlords who were able to exploit the lack of molestation to traffic and build up a war chest to use for extortion. Having the Warlords in that position is dire for the Government.

The Taliban could have been a lot more aggressive. It was only with the last few cards after the Warlords had cut the Government down, that the Taliban started a bit of an expansion, just building up presence, rather than going after the Coalition especially since they had a couple of abilities which could have hurt them.

Looking at it from a Government perspective, it would be handy to be in areas where there is COIN control and Warlord bases, because if they traffic Patronage goes up too;  just couldn't get there though. A few more turns could have turned the Warlord around.

It was interesting how once the support was in place in the Warlord areas, this favours the Coalition as once COIN control is lost as the Warlord didn't seem to have an incentive to affect support.

One of the the great things about the game is variability. This is due to the cards, that each round can achieve a lot or nothing and also the other players and how they play.

The game is also suitable for solo play.

Email ThisBlogThis!Share to TwitterShare to FacebookShare to Pinterest
Labels: A distant plain, Boardgame