I continue to persevere with this game... 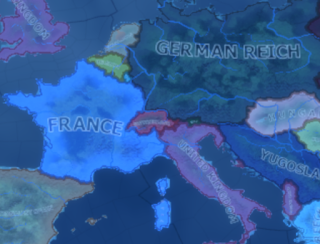 The situation in January 1941.

As the year starts, we take a pessimistic view and start strengthening the forts on the border with Belgium.

In the Alps we are being slowly pushed back.

Then we get a message that we are running out of convoys.  After a panic it turns out to be just plain wrong.  Clearly the AI has a sense of humour.  We actually have over 350.  More than enough for our modest requirements.

We appoint Zivony Peshkov to the Government.  He will aid in building military factories.  We desperately need to be able to produce more armaments, of all kinds.  The failure of Lend Lease has been a big blow.

The grind in the Alps continues to push us back.  We have almost collapsed and the Axis look like retaking Venice.

Our research is still focussed on improving our industrial output.

In late February there is an actual lull in the fighting on the Western Front.  Ominous.

This spreads to Italy where the Germans have pulled back, leaving the front to Hungarians.  We are saved! 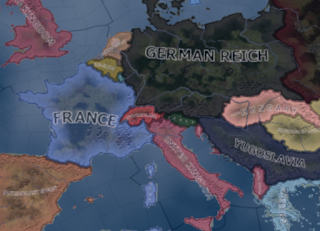 March 1941.
The only change is the reappearance of Italy.

In March the Germans start attacking in the West again.  The airwar switches to Northern France, however the Axis make an effort to capture Trieste.

A large German convoy is sunk off Corsica.  What were they thinking?

In another strange twist, the Germans have retreated from the Alps.  We start to advance.

The German attacks continue against Belgium, which seems to be holding out okay, and against the Maginot Line (which needs constant reinforcement and force rotation).

Romania joins the Axis and enters the war.

Our advance in the Alps brings the Germans back.  By late March they are pushing us back again.

The air war is being fought over the Alps and Northern France.  We might have the better planes, but we are heavily outnumbered: something like 200 to 1,500!

We switch two factories from artillery to rifle production.  We might have just turned the corner in the rectification of our armament shortages.  We also start researching Assembly Line Production.

3 April and it looks like our Front in the Alps will collapse for sure this time.

But in mid April the German attacks in the West stop and by 18 April the Germans, with the exception of attacks on Trieste, have stopped their offensive in the Alps.  We are saved again.

The break doesn't last long and in late April the Germans launch another big offensive against the Maginot Line.

9 May and fighting starts again in the Alps.  We move a fleet to the Adriatic to help with the defence of Trieste.  This draws the German naval bombers and we quickly withdraw, after losing two old destroyers.  In all this fighting Trieste was lost but then recaptured.  Venice also came under attack.

By late May the situation in Italy looks calamitous.  The decision is made to move the motorised/tank army (that was resting on the French Belgium border) to the northern Italian plain where it can help in the fighting for Venice and limit any potential breakthroughs the Axis might make.

The shortage in rifles sits at 11,000, however the situation is definitely improving.  At the end of May we are able to switch to War Economy (about time).

In a shock move, the Germans pull out of Italy in the beginning of June.  The question now is how aggressive should I be in counterattacking? 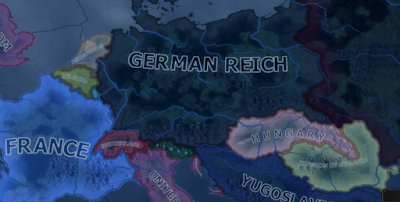 I decide on a few modest advances and by mid June the Germans have returned.  I should be saying Axis as most of the troops seem to be Hungarians and Romanians.

Japanese divisions are observed on the Western Front and later significant Japanese air assets appear over the Alps.  I feel that the Axis have more allies than the Allies.  This is very true after the AI has been continually sending Commonwealth troops to a watery grave in the eastern North Sea.

In late June we start researching how to improve our ability to break the enemy codes.

Sadly at the same time the British Raj cancels its Lend Lease arrangements.  They have been very helpful.

Against the Axis attacks in the Alps I have planned a defence in depth.  If we can get the time my troops can dig in and significantly improve their defensive posture.

Come July the Axis attacks in the Alps have stalled (giving my troops time to improve their defensive works).

The situation on the western Front is quite different and the Germans attack endlessly.  Even with the Maginot line it is necessary to continually rotate throops through as they get exhausted.  There are two benefits however, our material losses are limited and the experience gained by our troops is significant (and is not being diluted by constant influx of replacements to make up losses).

By August the rifle shortage is almost over.  The focus is now switching to planes and new factories are being built to produce them (mainly fighters).

Both fronts are a bit of a mess with divisions from different armies intermingled.  I look at trying to create Army Groups, but this idea doesn't seem to be available.  Things are shuffled around to try and create cohesive formations.

Again the Germans leave the Alps.  This time however they leave plenty of their allies to hold the front.  We are happy to just dig in and watch them.  The few British divisions on the Italian front make some suicidal attacks, but stop after a while.

21 August and we receive news that Germany is justifying war goals against us.  WTF?

The peace and quiet in the Alps has allowed us to complete digging in.  Just in time as the Axis launch another offensive.  Now however I feel confident that the front will hold and decide to redeploy the tactical bombers that were supporting this front  to Northern France.  The fighter aircraft remaining, even though there are just 200, seem to be getting the advantage over the enemy (which appear to be flying predominantly Japanese models).

Some thinking about this war goals business reveals some fine print and the aim of Germany to "Go around the Maginot Line".  Oh dear!  Maybe Japan is getting ready to go to war against the Netherlands and is planning to do this in conjunction with a German attack on that country (I've been surprised they haven't done so before and that was why I had the motorised/tank army sitting on the Belgian frontier).

At this time resistance also occurs in Piedmont.  The Italian front can spare some troops to take care of that.

But what to do about the Netherlands?

The existing forts on the French/Belgian frontier (the extension of the Maginot Line) are further strengthened, but they are of no use without troops.  Four divisions are dispatched to the Belgian Netherlands border and told to dig in.  This might by time if an attack comes.

Five fortress divisions are commissioned (luckily the rifle shortage has just about been cleared).  Will they arrive in time?

The game crawls forward to October.  I save the game and look forward to picking up play the next day...

On attempting to load the game I get a message to the effect that the saved game is not compatible.

It takes me a while to absorb this fact.

Once the red mist settles I see that the game has indeed been upgraded.  Those lovely people at Paradox have made some free content available and unbidden Steam updated my game.

At this time the first world problems pile up: reusable sealed plastic bags don't allow themselves to be unsealed; front doorbell doesn't ring (more on this); dogs bark; delivery expected and planned for next week comes early; partner rings wanting to know who's at the door (she's at work but the new fangled door bell has notified her and not me - it probably sensed that I have taken leave of my senses); I rant at partner telling her never to retire, that retirement is a nightmare and that whatever shit she has to put up with at work (and there is plenty) is nothing like what I am now experiencing in my desire to get back to my imaginary world.

There is what looks like a highly convoluted process to go through to get a back version of the Hearts of Iron IV software.  Am I brave enough to try it?