The Battle of Ottignies - Take Three

At the NWS last night I took James of the ANF through his first game of Napoleon's Battles.  James had long suffered me making comparisons between NB and Shako and so it was an important event for me.  We had planned a day of gaming, but events out of our control conspired against us.  This was probably a good outcome as I was trying to work out how to use my limited 1/72nd scale forces to do the Battle of Quatre Bras.  But I digress.

Background to the scenario can be found in this post.  James took the French and Mark B the Prussians (his second go).  I umpired.  I also decided to take a different approach to photographs, using the "hold the camera at arms length high above the table and trust to digital technology" technique.  Seems to have worked fine... 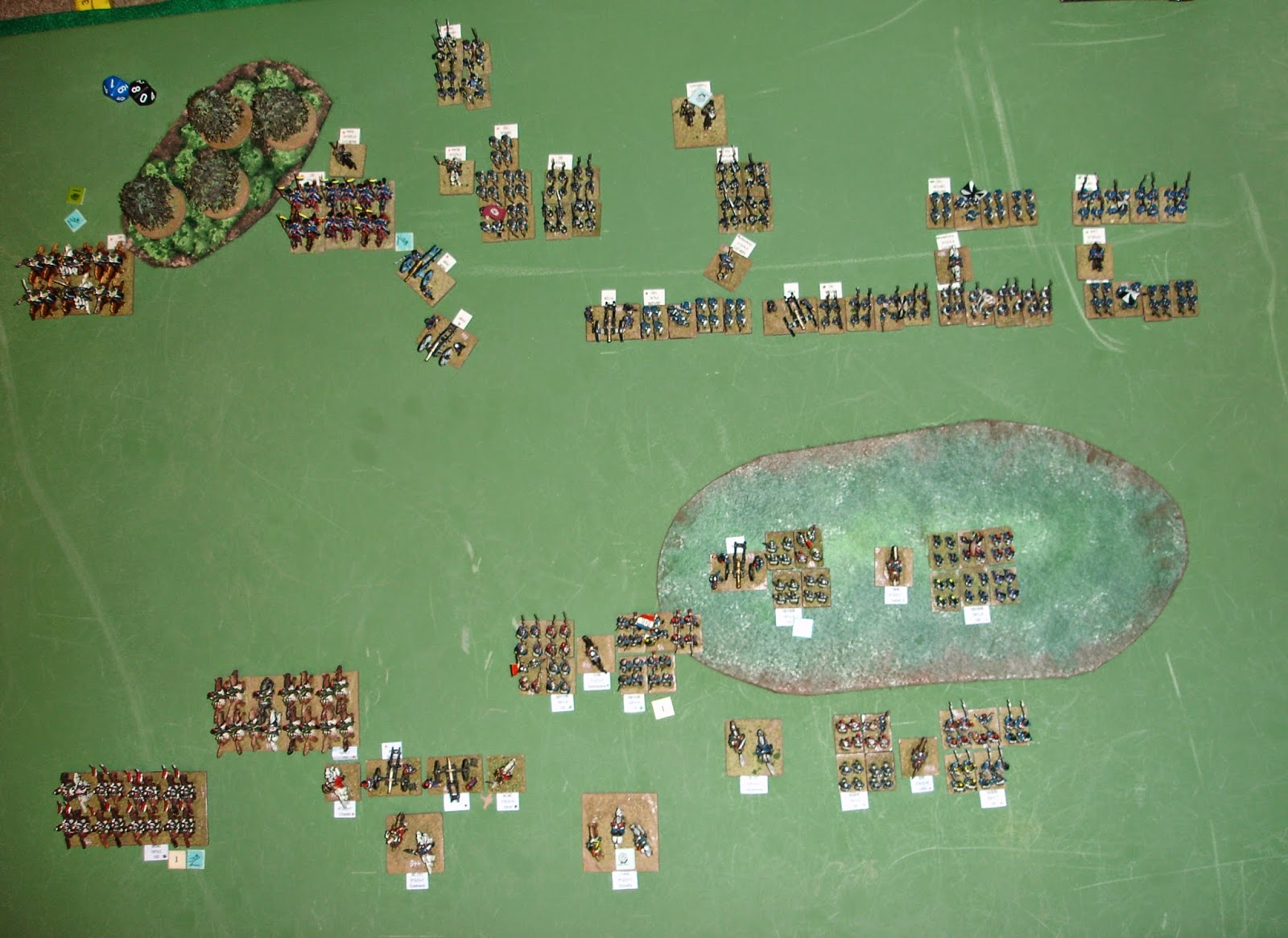 At the end of the first turn, the French have seized the low rise, bravely exposing themselves to Prussian artillery fire by crossing the crest.  The Prussians were playing defensively, deploying in line, a formation I'm not fond of.  The French cavalry had immediately attacked the Prussian cavalry and successfully neutralised it for a turn. 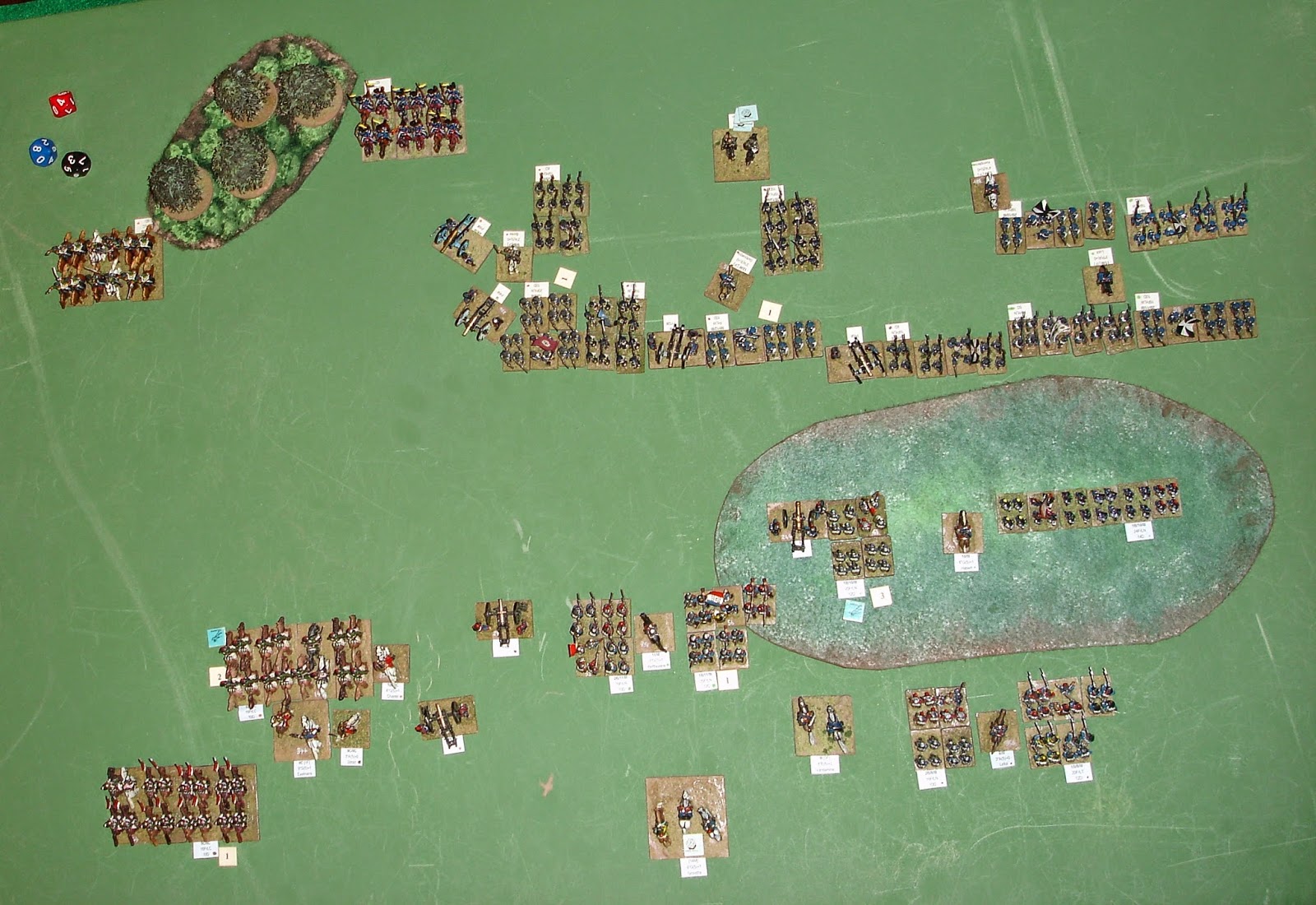 The second turn saw a repeat of the first.  More inconclusive cavalry action, except that the Prussian cavalry commander was taken prisoner when he mistakenly thought the French were Prussians  and went up to order them to turn about.  The Prussian artillery continues to damage the French. 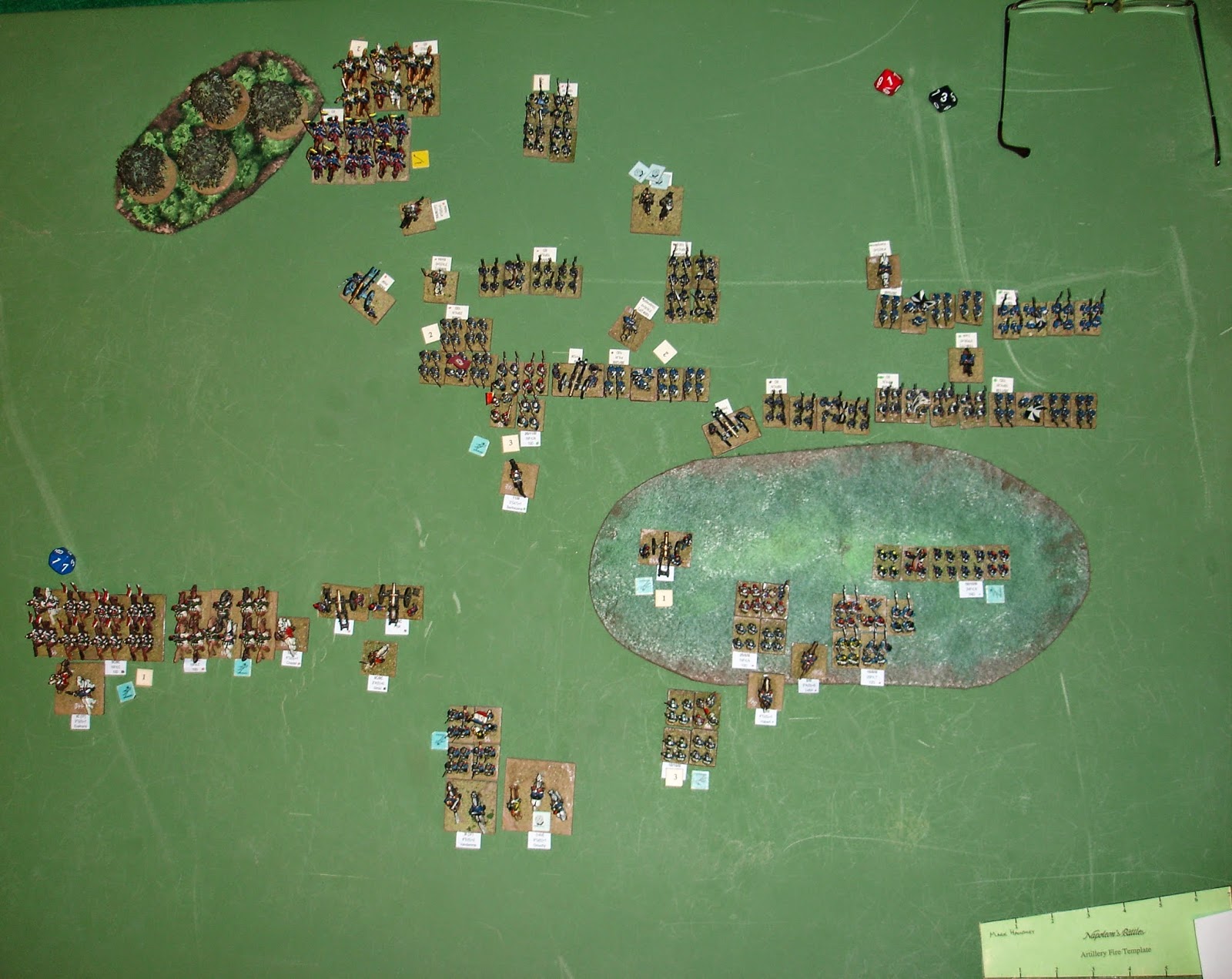 Turn three and still more inconclusive cavalry action, although it is beginning to wear down one of the French cavalry units which had finally been trapped in the Prussian "cone of fire" (The Prussians had deployed some guns in the belief that they would get a pass through shot - not in these rules, sorry.)  Acting on umpire advice the French pulled back one brigade which was close to dispersing after withstanding over an hour's bombardment from the Prussian guns.  Attention was now turning to the other troops on the hill and three Prussian brigades were engaged in what turned out to be a fairly ineffective fire, until their guns came in to action that is.
However the French had attacked.  One brigade lead by Vandamme had been repulsed, but its companion was now lodged in the Prussian lines. 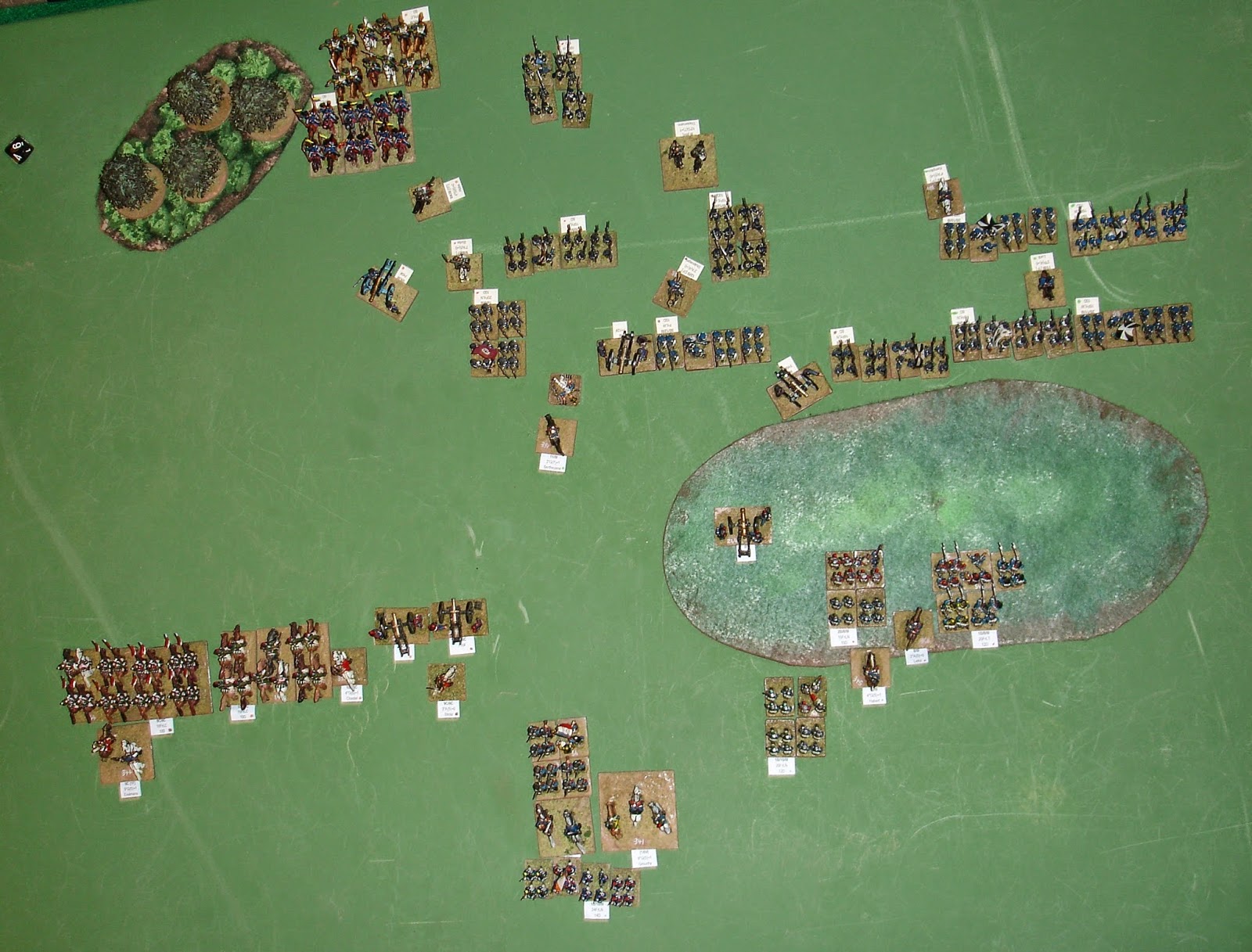 The last turn.  Weight of Prussian fire had driven one brigade off the rise and dispersed the isolated brigade.  The French were now in trouble as their incremental losses meant they had few fresh troops to make another assault.    The Prussians were largely intact although some of their batteries had been silenced.

This was the third time I had run this game.  It seems that three or four turns is the most I can get through with new players, competing with the distractions of venue and social engagement.  The table size worked well (three feet deep and four wide although we were just using three feet) along with the numbers of troops.

Each time play has been quiet different which I find interesting.  I'm now determined to give it a go solo.

In these photos the labels really seem to dominate.  As the umpire I found them really helpful in keeping track of things.  The only variation I have added to the label is to include the original unit size.  I'm still perfecting colour coding.  Also thinking I should revisit the flag/pin option I was looking at previously (I think I over complicated it when I tried to also use it to mark casualties).  I also wish I had more figures to use as casualty and rout/disorder markers.