The game was designed to test the Napoleon's Battles rules (2nd Edition) as a simulation of the Prussian attack on Plancenoit.  It was more a battle against the terrain for the Prussian, but a sign of its success was that it was thought provoking (I'm interpreting that as a positive thing).

Observations from the Prussian Player

Mark B subsequently asked me some questions:

1. The delay caused by the guns and infantry coming on first, and clogging the roads, was annoying.  Is the citation for the "order of arrival on the field" reliable?

Yes, the Prussian order of march is well documented.  The IV Corps cavalry were at the very back and in the course of the march overtook the 13 and 14 Brigades.  I think this all stems from the retreat from Ligny/Warve.  It would be interesting to try out with the SPI board game what the march looks like (I did that to set up the Ottignies scenario).

I think there is a problem with unit size on the table top and particularly with the cavalry. The Prussians seemed to use their cavalry more in detachments, something that is not really catered for in the rules.  It just strikes me that the cavalry formations are too big.

2. Secondly, how do the sources discuss the French "reaction time" upon first noticing the Krauts?  It is contentious, but it seems Napoleon knew quiet early.  Could it be that the French saw the approach and 20 minutes elapsed before French troops stating moving to Plancenoit or something akin to that?

The Fichermont position was close to where Durutte's 4th Division and Jaquinot's cavalry Division were deployed.  The French didn't attempt to fortify Plancenoit.  Also I think the Prussians originally went north before turning south (some at least).

From Adkin's excellent book, The Waterloo Companion, Napoleon knew at 1300 and Lobau was dispatched at that time.  He was in position for about two hours before the Prussians started attacking at 1630. (Pages 379 to 391 and page 411).

3. I could have deployed MUCH more quickly if there wasn't any immediate French presence.

Yes, I was a bit adventurous advancing with the 19th Division and got in to trouble as a result.  The French cavalry do not start on react.

It appears that Lobau deployed between the two woods.  I had the 20th in the Fichermont Wood and later advanced with the 19th into the other woods.  Also from Adkin's, he has the French cavalry positioned in front (Map 36 page 384).

4. The moment of deployment, from road column to brigades, took roughly 5 turns I think  - what's your recollection?

I think the problem is the space a brigade takes up on the road and then the time taken to 'close up' when deploying.

Checking against the photos, von Losthin is deployed after two turns.  Hiller had more trouble due to the wood, but was inaction by the end of the 1630 turn (effectively four turns).  There was a degree of caution due to the French artillery and cavalry, but even so, these times work with the real battle.

5. It may be that a deployment, if unhindered by a French presence could be done in say 3 moves?

The horror is the woods.  I was ruling that you could always change formation out of march column on a road in woods as it counted as clear for movement, even though the subsequent deployment puts the unit in the woods, regardless of movement available.

6. And, as you suggested, forced marching is the order of the day.  Historically the Prussians did rush there.    That could reduce it to two turns?

It would be interesting to try with force marching.  However in a counter argument the roads were mud and they possibly are force marching just to have a normal movement rate.

Also if the Prussians can force march so can the French...

Limiting the availability of force marching to troops in march column might be an option.  It is not a rule I have used much.

7. How long in realtime is a turn?

The Prussian artillery allocation can also be changed so the two batteries with the cavalry are corps guns and there was also one 12pdr too many based on some sources.

The other change is to add Blucher (and of course there is the Prussian I and II Corps to fit in).

A lot of scenarios don't have marching troops (except reinforcements) and there seems to be a problem matching march time with battle time.  I was keen to see how it worked for the Prussians at Waterloo using Napoleon's Battles.

As we saw it is a challenge.  In part units just take up so much space and even though passing through is relatively easy, you still have to have space to fit.  Add in all the woods and stuff and it creates a real problem.

What happened differently was that in the real battle the Prussians pushed Lobau back after just three turns (1630 to 1700) and then at 1800 had started to attack Plancenoit.

If I had stayed deployed in the open ground that might well have happened.

However in any game of Waterloo were I am commanding the French I would be pushing Lobau forward, although that would risk putting him out of command.  The aim would be to bottle the Prussians up in the Bois de Paris.

All up we played for about eight hours so that means doing the whole battle in one day will be a serious challenge.

The printed battlefield worked well.  Some items need a bit of adjusting (mainly to provide effective gaps between terrain pieces - something that would aid both sides).

This is the jpeg by Alfonso Peral that the battlefield was printed from. 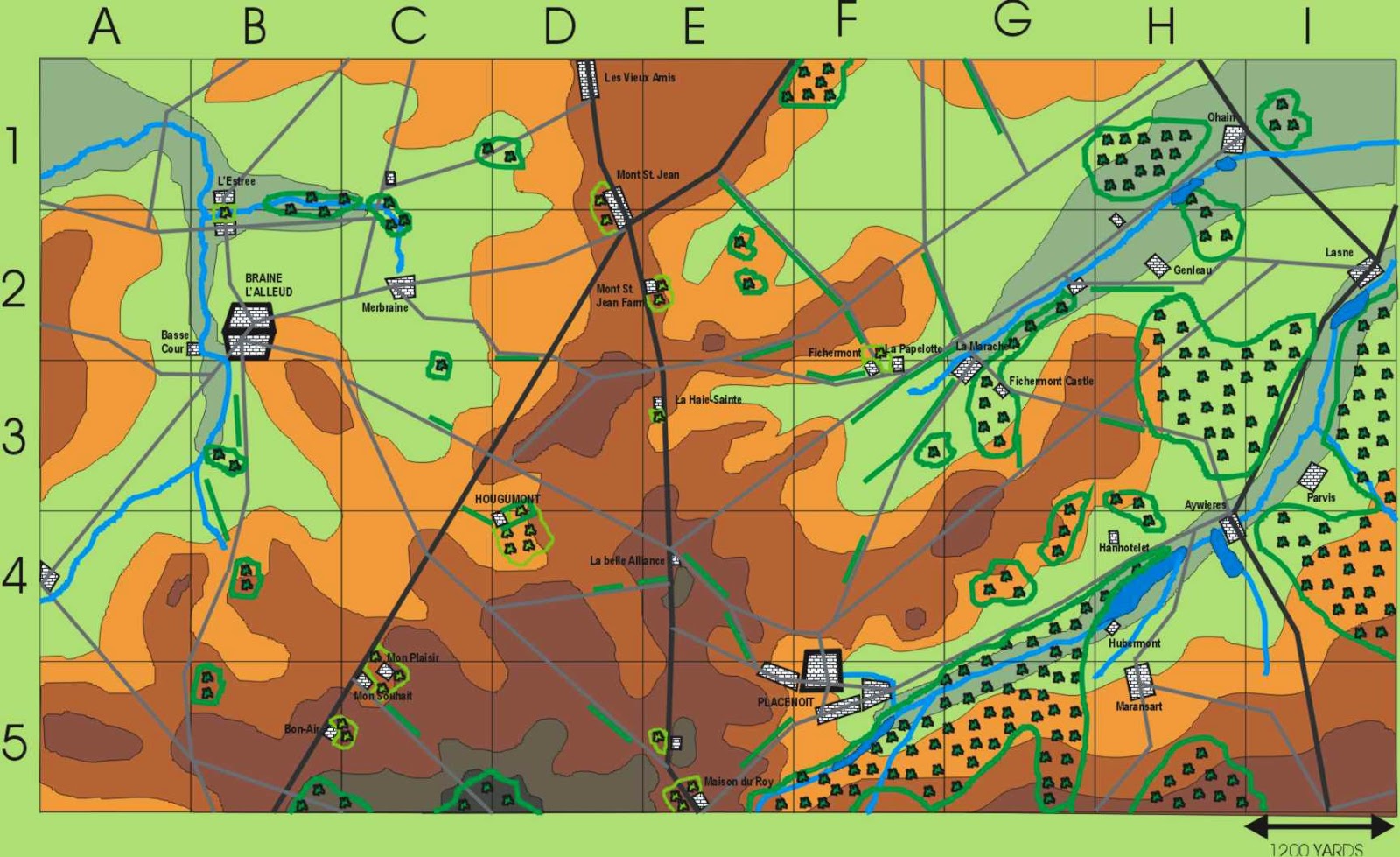