I had the good fortunate and privilege to participate in a game of Diplomacy hosted by the Mad Padre.  You can see all the posts here (makes for fun reading):  http://madpadrewargames.blogspot.com.au/search/label/Diplomacy%20Game%202014

Sadly peace has broken out.  But my mind is still plotting and so to unburden myself this post is what I predict might have happened, as always from a very one sided view of the world, this time as England. 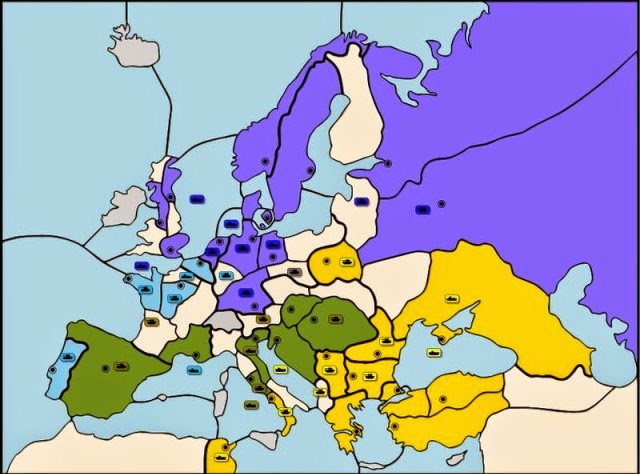 Assume the worst for England and France disbands its army in Portugal and fleet in the Mediterranean.  England builds a fleet in London and armies in Liverpool and Edinburgh.  Turkey builds an army in Constantinople.

The start of 1908 would see England with 14 supply centres, Turkey with 12 and Italy 7, France 2.  England would have two builds, Turkey 1 and Italy none.

In 1908 Turkey should be able to finish the conquest of Austria, but I wouldn't expect much more unless it got lucky.  Both Turkey and Italy were strong players so it would be a challenge for Turkey until it could do some redeployment.

England, facing only two armies in France should be able to take both Brest and Paris by the end of 1908 giving it 16 supply centres.

Then it becomes interesting as you need to get to 18 supply centres to win.  With careful planning, forces should be available to at least hold the centre against any Turkish thrusts, while being able to use the fleets to take out Portugal and Spain.

Of course this assumes no collaboration between players.  It is possible Italy might help France and England could help Italy so they would be some "diplomacy" around that.  :-)

I expect Italy would be happy to still be in the game at the end and that could be the case.

England had a very good alliance with France aided by keeping the English Channel unoccupied.

England blocked Germany from getting Holland and then helped France to secure Holland.

England got Norway and established an alliance with Russia.  Russia seemed less keen on attacking Germany (understandable as it was fighting Turkey) and so the Anglo-Russian alliance collapsed and England supported the Kaiser on a push east.  It was interesting.  I made up stories about Bolsheviks to provide a narrative to what was happening.

At this time England also allied with Turkey and helped Turkey take Moscow and ultimately Warsaw on what was set out as a temporary basis.  This knocked out Russia and also supported Turkey in its war with Italy.

France sat on the fence.

England eventually rolled up Germany, started recovering Russian territories and made a move on Holland.

After that it is all hypothetical.

Diplomacy is a cruel game and not for families.  It was great playing blind - I had no idea who the other players were.  Using email made it much more impersonal, but also much more structured - the challenge of getting your point across with just a few lines of text.

Michael did a great job in shunting mails around and working out moves.  He also published some great commentary, well aided by other players that makes for delightful reading, so make sure to check out the Daily Dissembler.  There are also comments by various armchair generals and Archdukes that make for a good read as well.

In the course of the game I released a the following Communiqués from the British and Colonial Home Office:

The King wishes to announces his deep regrets at the Bolshevik uprisings that are occurring across the great Russian Empire.  The King had thought to warn the Czar, his dear nephew-in-law, of the dangers of his autocratic ways and had felt that the continued abuse of the peasants and serfs would lead to trouble in the long run.  Excessive politeness precluded this advice, but when things became all too obvious, the path to the Czar was blocked by a most unpleasant individual called Rasputin.
The King called upon his nephew the Kaiser to see if he could get through.  The King understands that the Kaiser dispatched Messrs Lenin and Stalin, disciples of the leading social reform thinker, Mr Marx, late of London.  Their efforts seem only to have made things worse.

As a result it has been necessary for forces of the King to occupy St Petersburg to protect the city from the ravages of the mob and save his niece, Empress Alexandra.  The King was also happy to help protect Sweden, the home of his niece Crown Princess Margaret.

All this protecting has stretched the home resources and the King has called on his loyal subjects in his considerable colonies for further assistance in keeping the peace and the Bolshevik scourge at bay.

The King is happy to announce the occupation of Moscow by the ANZAC Corps after a successful landing at Gallipoli and subsequent travel by the Orient Express before continuing on a Contiki Bus Tour that lead them to the very doors of the Kremlin. Unfortunately their luggage was lost in transit and they had to obtain some substitute clothing from a passing retailer of Turkish carpets who did them a good deal in farquary rugs among other things. Slightly embarrassing, the ANZAC's had to borrow a flag. A white pacman about to swallow a star on a field of red.

However the King very much regrets the embarrassing rivalry between his Royal Navy and his Royal Army over whether to attend the Kiel Regatta or the at home match of the Holstein Kiel football team.

The King is happy to announce that his colonial troops stand ready to shirtfront Bolshevik tyrants wherever they may be found.

However, the King is deeply sorry that his nephew has become enthralled by Rasputin and that Germany has now become the defender of Bolshevik Russia.

We are working with France to liberate Germany from this demonic scourge, which we fear is spreading to Italy.

(Not sure I actually sent this next bit.  It was when Italy stabbed France and was surprised by Turkey)

After claiming Munich the Italian has grabbed France by the Marseilles and had the Turks arrive at his back door. He should have listened to the Prime Minister of my Australian Colonies and "stopped the boats".

(Some Australian political references in there for local colour).
Posted by Sun of York at 3:43 PM