1940 S/O - Rain, Rain and More Bloody Rain
Rebase, production and reinforcements – the US declare that they are lending the CW 2 Oil and 1 Oil to France. Following on from last week’s 2nd early EOT roll of 1, the German was keen to win the initiative and roll some S/O clear impulses. With a +1 he rolls a 6 (7) for rain – not the start the German wanted – the conquest of France in 1940 is now under a cloud.
Axis 1st Impulse – weather 7 rain everywhere but fine in the Med. Italy declines a DOW after a short conference with the German High Comd – it was expected that they would have made a DOW against at least France, but perhaps they were hoping for clear before joining the Axis cause. Germany takes a Land. GS in the rain are marginally ineffective with one Arty inverting a single French Corps on the outskirts of Paris. The brand new JU88 attempting a GS against Paris is shot down by the French air force but they also lose their brand new D520 FTR to escorting ME109’s – both pilots bail out safely and trudge to their nearest airfield. The French AA roll a minimum of 4’s and drive away a Stuka. With few inversions the German conducts a single attack to clean up the defending 4 INF in the forests Southeast of Paris before it has the opportunity to step across the river Seine – TOTT blitz roll and it becomes a Cadre. Italy takes a no cost combined and sails a sub. Japan takes a no cost land moving a few units and hoping that the weather clears. Impulse marker advances by 2.
Allied 1st Impulse, the French take a Land and attempt to more their reinforcements forward, but even the ARM and MECH that arrived in Vichy struggle to get to the front line in the mud. The line in front of Paris is reinforced and the Allies dig in hoping that the bad weather and another early EOT roll will further delay the Axis schedule. The French HQ reinverts the forward INF and the AA in Paris. The CW takes a Naval and sends out its Convoy escorts across the oceans just in case the Germans strike out with their U-boats. The Queens sail to the far east loaded with the Sydney Militia, and a transport embarks a SA TER for destinations unknown. The Home fleets sails into the North Sea just in case shore bombardment is required or the German surface fleet sorties out of Kiel. Russia emboldened by its adventure into Iran makes a DOW against Iraq and eliminates their 2 factor Camel Corps on a 10:1 assault. Again, the US Senate objects to this aggression by the Communist State and the US losses another chit – gain one/lose one – not much progress in the chit pools for the US. Reinforcements and Zhukov are sent to the German/Polish border. China takes a no cost Land, and with the arrival of Stilwell and 2 more Communist land units they feel a little more secure with the onset of the early winter rains. Impulse marker advances by 2.
Axis 2nd Impulse, again the weather Gods ignore the pleas of fine weather from Germany and give them rain again in the Temp with a 9 Rolled, rain also arrives in the Med. No DOW from Italy and Germany takes their mandatory Land Impulse. They again attempt multiple GS with little success despite the French AA and air-force being ineffective – the AA rolled a 1 and the French air-force cleared the bombers through with several 11’s. Germany attacks another ‘stack’ of French units defending the approaches to Paris, only forcing a retreat, and advance adjacent to Paris. Japan takes a Combined and sails reinforcements into the S China Sea. Again multiple GS in the rain fail – needing 1’s and 2’s – mostly 1’s in rain, so no attacks. The impulse marker advances by 2.
Allied 2nd Impulse, the French and CW take Land actions, as the French finally get their reinforcements to the front line. The British recognising the declining French position, step back 1 hex, the French send a 3 MIL to act as rear guard. Singapore is reinforced with the arrival of the WP Sydney Militia which immediately makes its presence known at many of the clubs in the city – the Aussies have arrived! Russia takes a no cost Combined and starts to send units to the Finnish border, perhaps telegraphing future interest in the borderlands. China and the US no action. The impulse marker advances by 2
Axis 3rd Impulse and still the weather Gods find no favour with the Axis and gives them another does of rain again, that is three impulses in a row, with a 6 +1 (7) Rolled, the rain in the Med clears, but it is rain everywhere else. Germany takes another Land and blitzes the 2nd hex adjacent to Paris on a +8 but rolls below average (

for a 16 forcing a retreat of the French defenders to the far banks of the River Seine, losing an INF Corps and all inverted. The second Blitz attack smashes the rear-guard 3 factor as the Germans roll a 15 on a +16 attack and advance to maintain contact with the BEF. German now has 2 hexes against Paris, with Paris fully inverted, no French HQs or acft upright. Japan takes a Combined and again attempts to GS the defending Chinese who are just loving the rain, GS and supply are halved, movement is doubled and there is a -2 on any attack by the Japanese. No inversions – no attacks and the front line remains unchanged. Italy remains inactive as the rain is no incentive for them to make a DOW – Hitler is not so sure. An Axis EOT roll is not the dreaded 1 and the Allies get a 3rd Impulse in the mud.
Allied 3rd Impulse, the French take a Combined and sail a small fleet of CA’s and their transport to their colonies in W Africa. A couple of units move to the front in the mud, but at least Paris is safe as half the German Army is now inverted. The CW takes a Combined as a 2.6 Mech arrives in Gibraltar and a MIL in Morocco. They unsuccessfully search for the German Cons in the Baltic but manage the first Strat bombing of a German City for the game as Dortmund's factory is shut down. The Allies wait it out, hoping that the bad weather continues as they roll another early EOT roll on a 1 – the third in a row! The Axis conquest of France is now behind schedule which has implications on Operation Barbarossa, the Axis will be desperate for at least one clear weather impulse in N/D. They have two hexes on Paris and can do a small land offensive using Rommel as they have 11 O-points and the French have no bombers left – they have all been shot down. Partisan roll is a 7 – no partisans for China or anywhere else, Japan is pleased at least. USE entry is again a non-event as the Senate goes into early recess – no US entry actions taken. Rebase, production and N/D reinforcements.
N/D – Merry Christmas Mr Lawrence
The Axis fail to win the initiative and elect not to reroll. Allies go first and roll a 7! Snow in the Artic and Temp but great news for the Japanese who now have their first fine weather in the N Monsoon and are set up to assault the Nationalist front line. 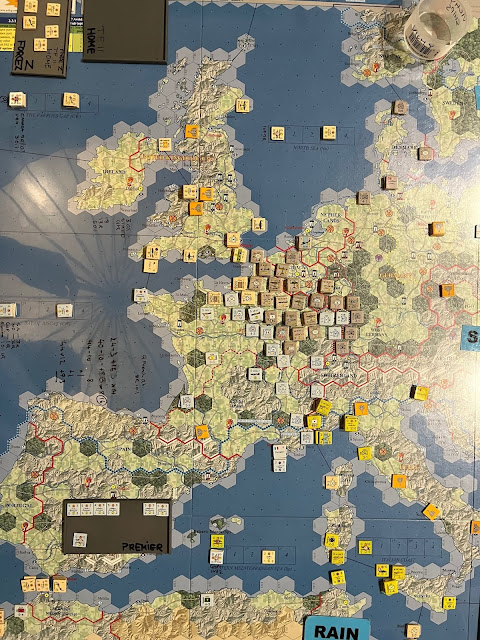 Western Europe - Italy still inactive and France defending stoically thanks to weather and short turns - 3 x 1's in a row for EOT rolls. 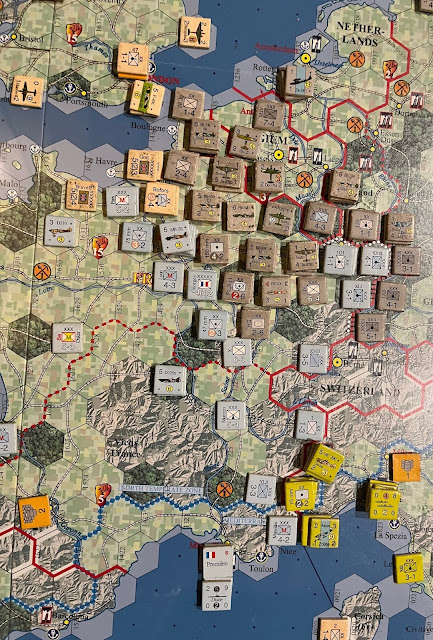 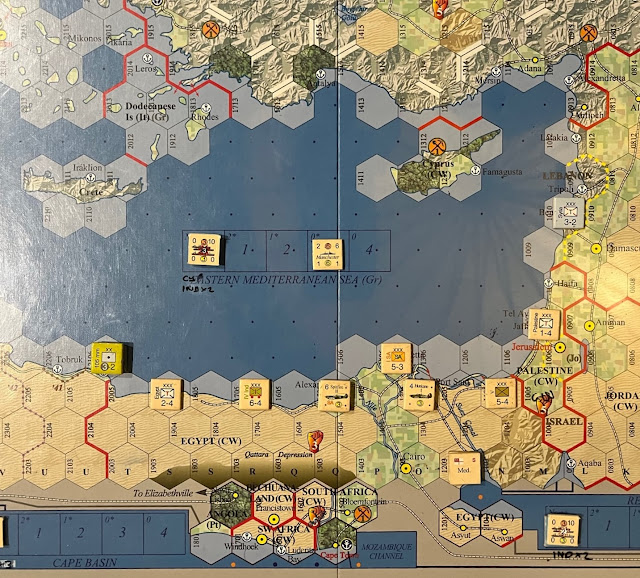 The CW starts to advance to the Libyan border now that General Alexander has arrived. 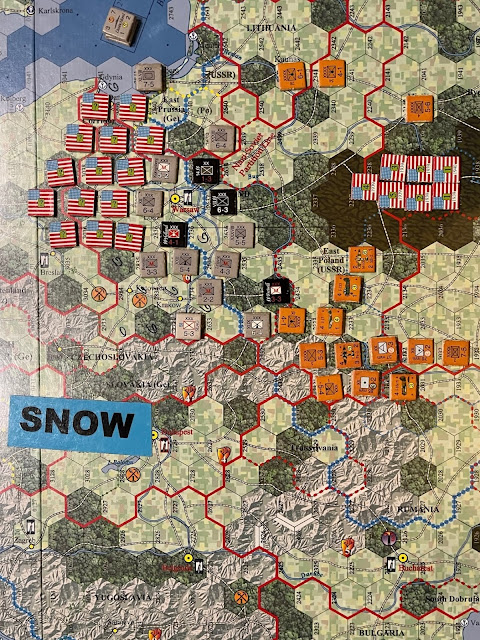 It's all about the garrisons 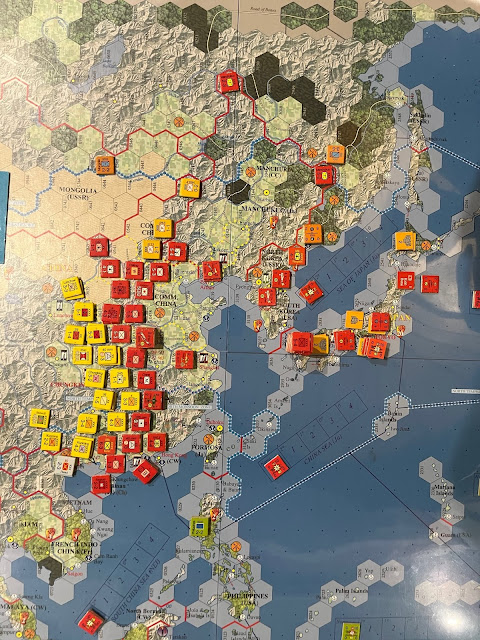 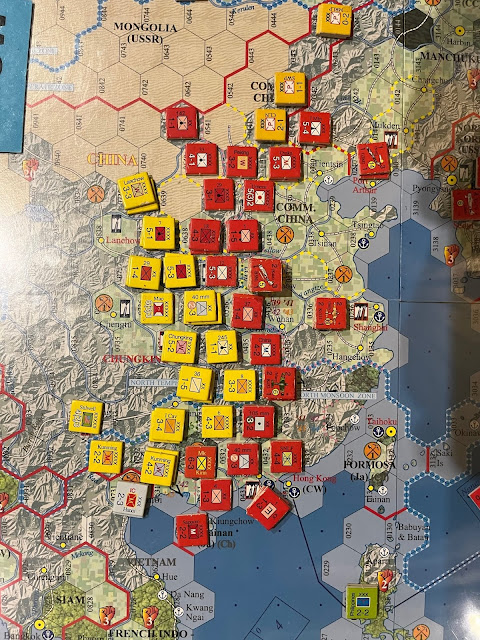 Japan set up to assault the Nationalist line, Arty, Acft, HQ's
and fine weather finally in the N Monsoon.
Trouble for the Chinese me thinks. 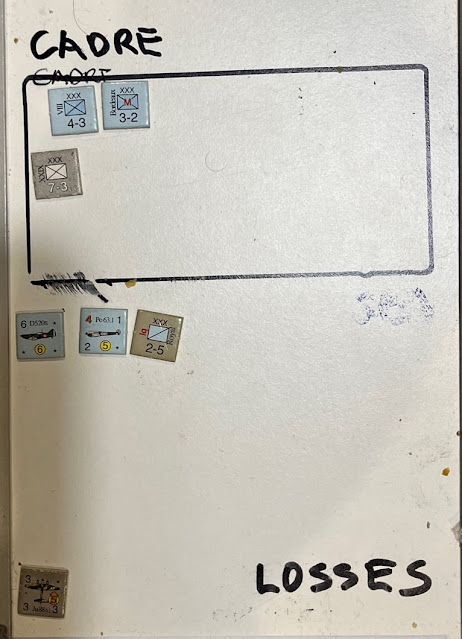