This is the official write-up from the Facebook World In Flames Players private group.

Axis second impulse and with the weather roll of 2, another bonus clear for the Axis in S/O. GERM take a land and Japan takes a no cost land as only INF units will be moving – might as well save the oil for the USA fight. GERM as predicted attacks the single MIL defending Penza taking the city with a 10:1 assault. The rest of Army Gp N advances East towards the Urals capturing rail and securing their LOCs. Army Gp S without support from the Luftwaffe as their GS failed to invert either Corps at Voroshilovgrad, launch a blitz attack against the adjacent 6 INF defending the cities Western approach easily overwhelming the defences. All the other blocking DIVs along the line were cleaned up by the flanking units, as was a 3 MIL. Back at Gomel, a Stuka attempted to GS Gomel, escorted by a 6 factor ME109 – the lone Russian 4 factor intercepted and shot down the ME109, with the pilot safely bailing, the Stuka aborted, fearing the same. Several important bombers were rebased forward, to support the next offensive if the weather continues to be fine. JAPAN takes a no cost land and reinforces the gap between the Nationalist and Communist Chinese, attacking the lone AA unit in the mtns at 9:1. Italy took a no cost land, desperate to save their oil and waited for Egypt to be put OOS by the Japanese Navy.

The Allies response saw the CMWLTH take a naval and place convs to ship BP’s to Russia. The loaded HQ Alexander at sea was aborted, returning safely to the UK for a well-earned RnR after his 6 months in Murmansk. The Courageous and her sister CV were not courageous, and rather than fight the Japanese CV’s, aborted to the sanctuary of S Africa. Another FTR was shipped to Gibraltar to replace previous air losses, and another long-range bomber rebased to Morocco to help break the deadlock on the land. The US spends oil to sail 3 more ships – he now has two CV’s Enterprise and Yorktown, and 4 SCS BS on the way to Pearl. In the first roll of the dice by the Communist, sensing it was time to test their metal, attacked a lone 4.1 GAR and rolled well enough to send it back to Japan, but lost a Div – but their intent has now been demonstrated and they will seek further opportunities against single Japanese units.

Russia railed out the Saratov factory and sends another Mil to the Northern city of Kirov. In the South Voroshilovgrad is vacated leaving only a single Corps and two NKVD Divs to keep the Corps from surrendering and the ‘peoples’ motivated – times are tough. The rest of the defenders of Voroshilovgrad withdraw East. A line is starting to form along the Eastern bank of the Volga and Don River hinged at Rostov and STALINGRAD.

Axis weather roll 4 – clear again – when will this end – anguish cries from the allies! Germ land and in the South, Voroshilovgrad is targeted by the Luftwaffe, and again no inversions, undaunted the Germ launches an assault and rolls top of the table taking the City – the Don basin is now cleared and the road opened up to Stalingrad. In the North, Army Gp N launches an underdone assault against Kazan and rolls poorly losing two units (7 INF and 3 SS Mech Div) in an exchange for the city. In the Centre the important city of Saratov defended by a 5 INF is taken without loss at 10:1, and with it the strategic rail – Russia is now cut in half as they can no longer strat rail or move oil/resources between the North and the South of the country.

Japan took a combined, opening with port strike against 5 x convs in Calcutta which were all inverted and with a nice split in the Japanese favour, just large enough to sink 2 x Conv pts in the port of Bombay. Searches in the Persian Gulf fail to find. Land units push to surround the Nationalists.

Allies impulse, all less Russia (Land) take a pass. The Russians decide not to rail out a factory and instead rail 2 x CAV from the East to cities in the Urals to start the process of garrisoning. The rest of their units fall back to Kuibyshev in central Russia, on the border of the Urals and in the South a defensive line on the Volga River hinged at Rostov and STALINGRAD. The Russian fails to roll the ‘1’ to end the turn.

Axis roll weather and their luck finally runs out as they roll a 7 – RAIN! The Allies breathe a sigh of relief, finally some respite from the clear weather. The Germ decides to take a combined as he cannot make a single attack and advances six units that are now only 2 hexes from several entry points to the Urals Map. The U-boat fleet sail in an attempt to stretch the CMWLTH and hunt his Convoys. Due to lack of training or inexperienced U-boat commanders, all bar one of the Germ search rolls was appalling - 3 rolls of 9 and one of 10 out of 5 searches (only 1 successful find – which the CMWLTH escorts countered, finding as well – two 3’s rolled, so no result). This meant no conv’s were found or sunk, very disappointing, especially in the Faroes Gap where 14 Conv’s were sitting with a single escort. Conversely, and just as disappointingly for the Royal Navy, they only achieved a single aborted sub, as they were unable to exploit the high search numbers of the GERM, neither sinking nor damaging any U-boats. The combined allowed 6 GERM air mission and the Germ was able to move four ftrs towards the front – most are still a full turn away from the front line. The Italians were more successful flying out to the North Sea and finding the two patrolling CA’s, damaging one and aborting the other, clearing that sea of the Royal Navy.

The Japanese did a no cost ‘nothing’ as their Navy has all sailed and have no more targets to find in any sea areas. With rain in all AO’s there was no opportunity for attacks for their land forces – Japan saved the oil. The Yamato sailed to search for two convs in the Persian Gulf but failed to find. Italy took a land and stepped back one hex along the Mountain line in Morocco, as the Free French were starting to outflank them. In Egypt another Italian Corps landed with crates of vino. The Axis failed to roll the EOT on a 1.

Allies ‘rain impulse’ next week with an ‘End of Turn’ roll of 3 or 4 if the ‘other’ Allies pass. The Axis is hoping the turn does not end and they get to roll another moral shattering clear weather and cross into the Urals in 1941! 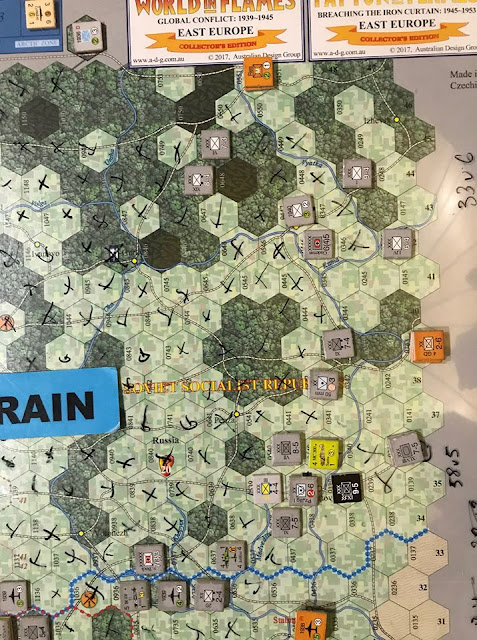 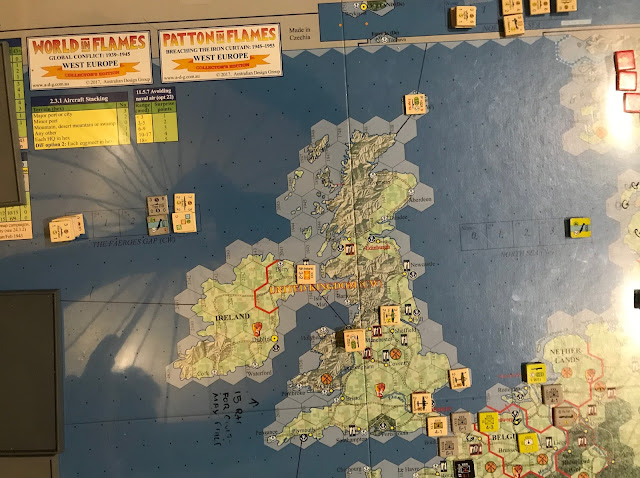 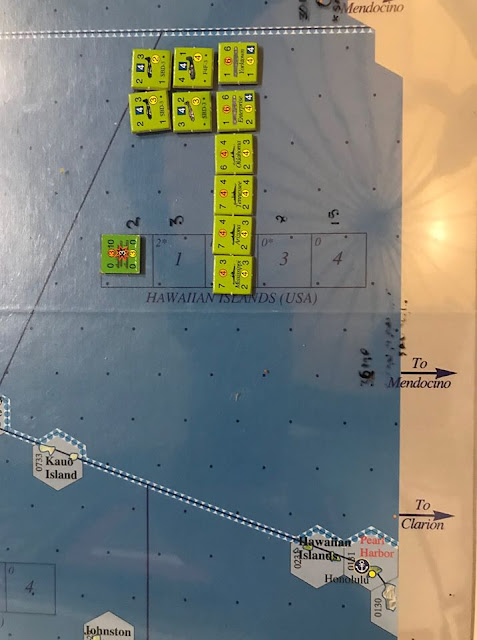 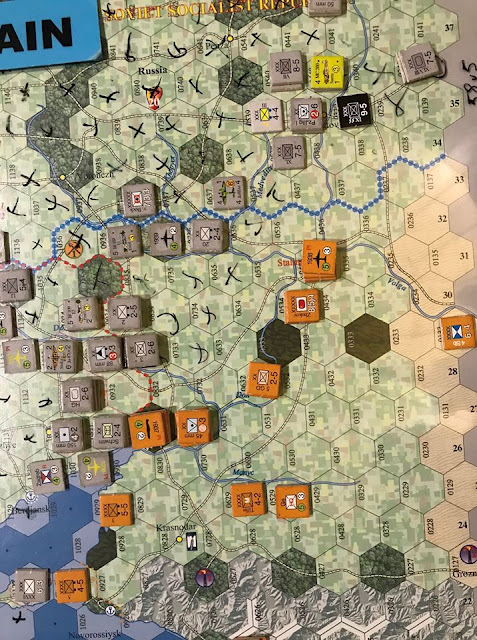 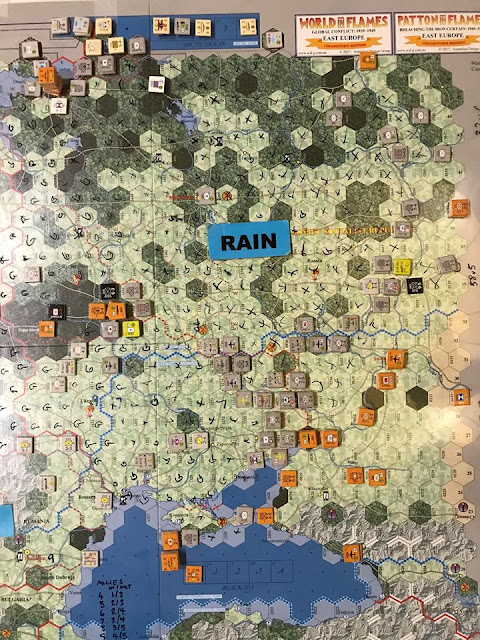 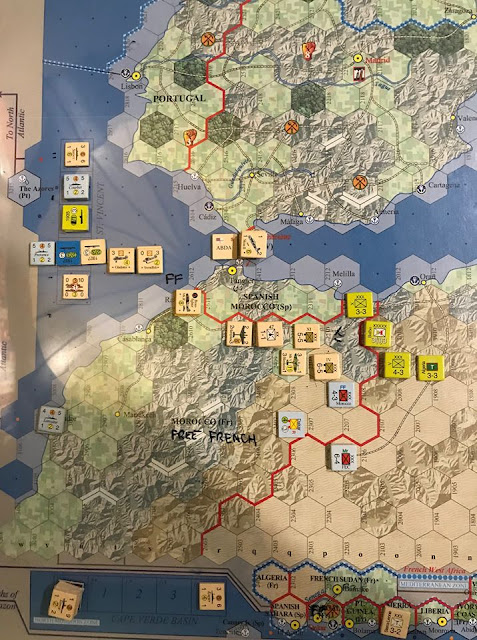 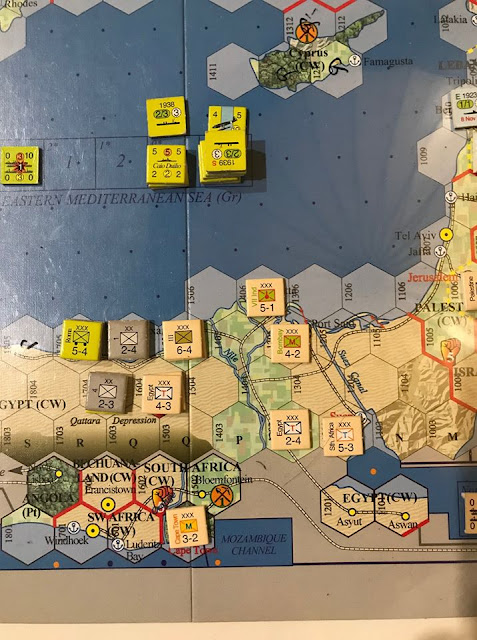 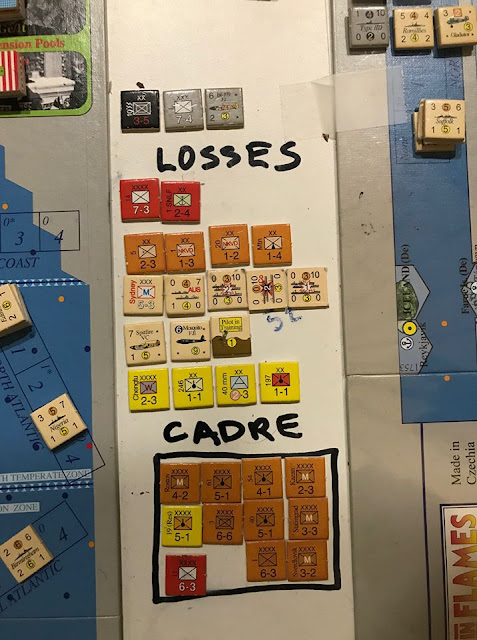 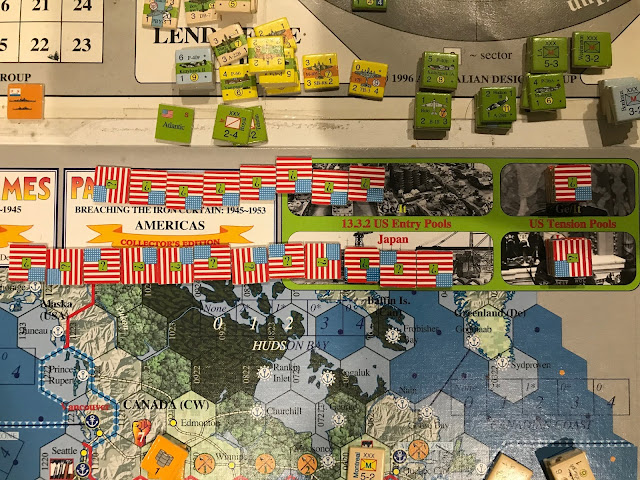 This is just showing the tension pool which is the mechanism for bringing the US into the war. 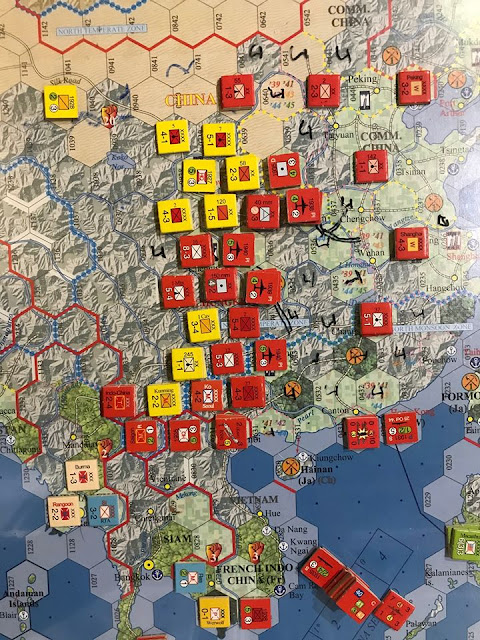 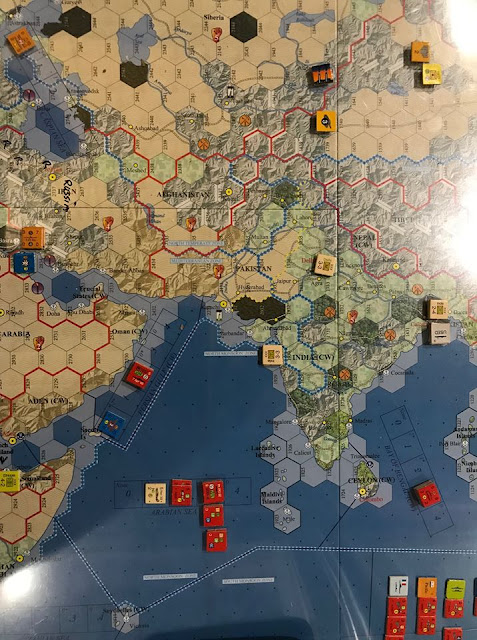 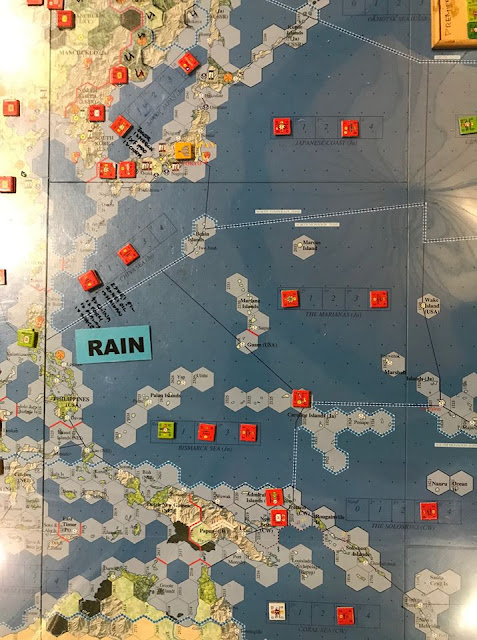