Simon and I got together for another game of Rommel.  Operation Brevity is an introductory scenario and I've played it once before, but not with Simon (relevant post is here).  I went Axis and Simon went Commonwealth.  All the terrain and models/figures are mine, better still they are close to matching the units/equipment engaged

The Commonwealth used road movement to grab the centre objective
(which having looked at the Wikipedia entry for this battle, might represent Fort Capuzzo). 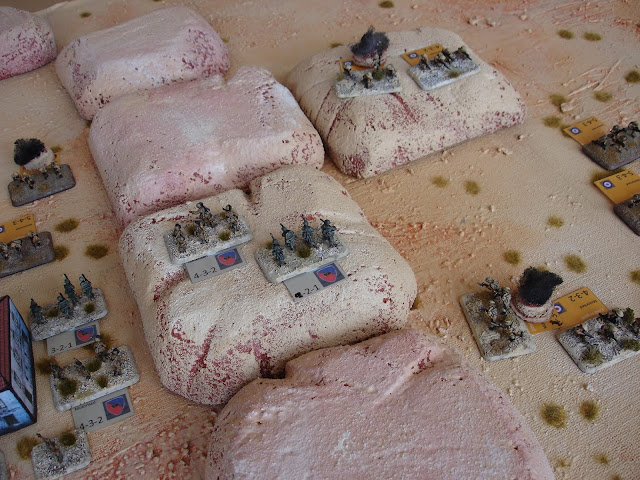 The first of many attacks on the Italians at Sollum is repulsed.
(Note: the model explosions are used to denote "tipped" units.) 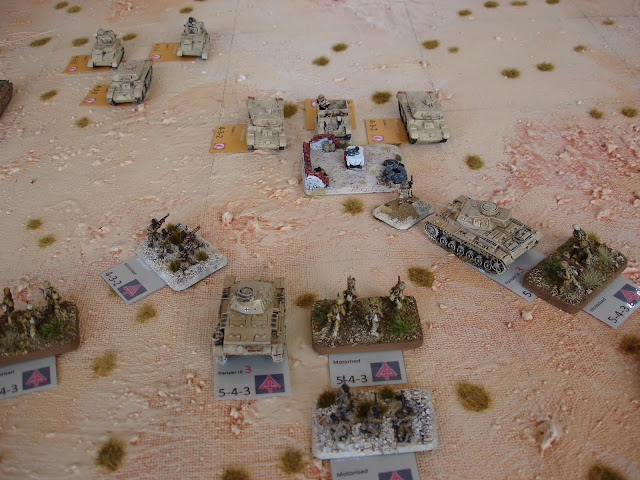 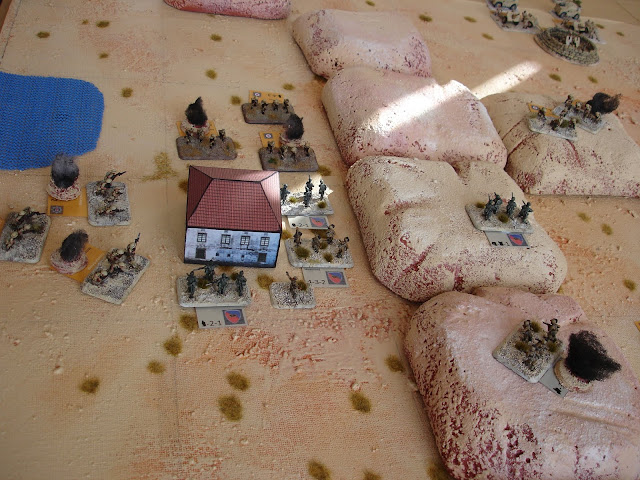 Again the Commonwealth attacks on Sollum are driven off.
Sterling work was done by the Italian artillery aiding the brave defenders.
Note the escarpment and the cool blue of the Mediterranean waters lapping the coast. 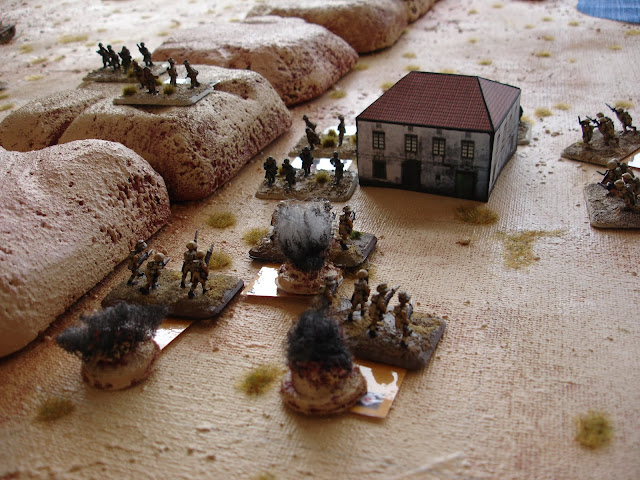 Another attack driven off,
this time with the view from the Commonwealth's side. 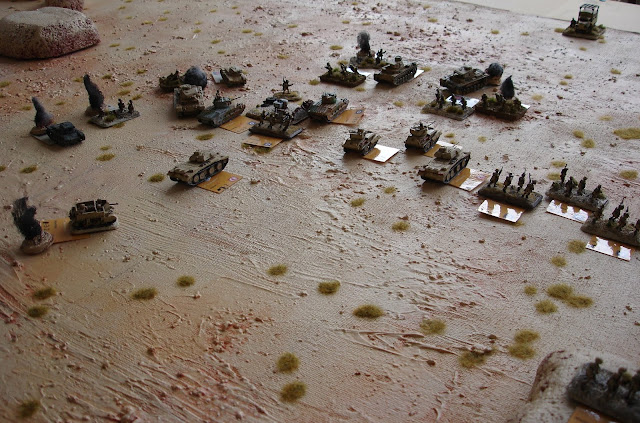 The battle keeps raging (seen from the Commonwealth's side again).
I have to say I found this game very picturesque.
The labels could be a bit better hidden,
but the lighting adds a special touch (and purely accidental I should add). 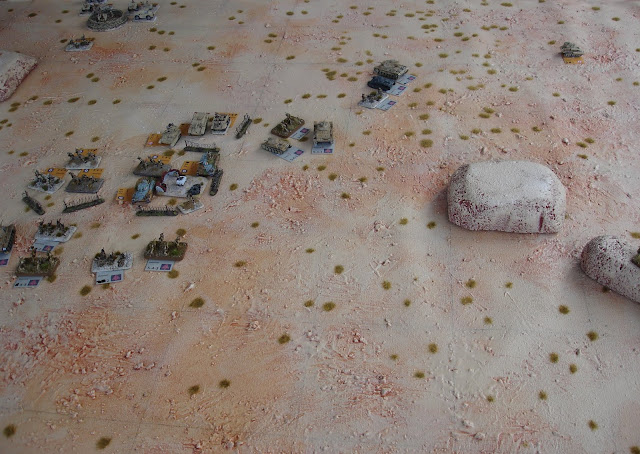 The Commonwealth send a unit of Vickers Light Tanks out to threaten Point 208 on the Hafid Ridge (that's my guess of the location).
German panzers can't decide whether to give chase or complete surrounding Fort Capuzzo. 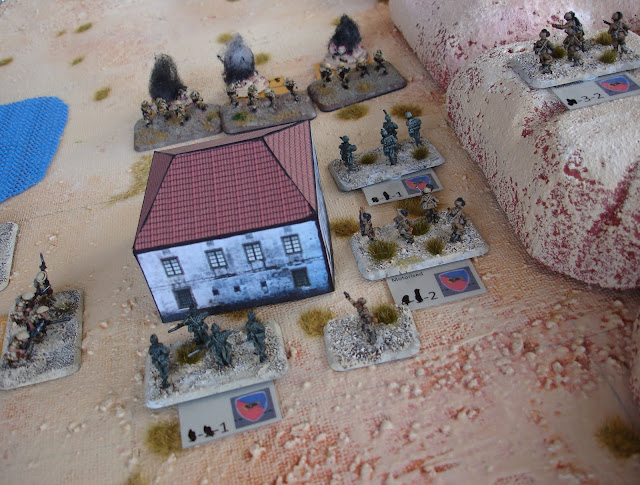 The Italian Border Force at Sollum are getting a bit thin... 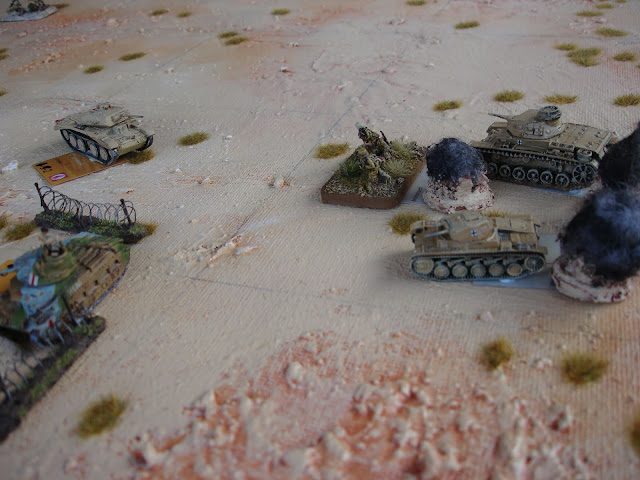 After giving chase the panzers are bloodily repulsed in their attempt to surround Fort Capuzzo. 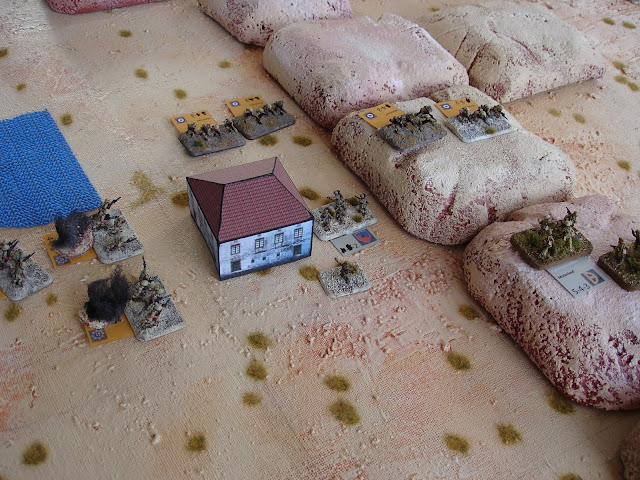 But Sollum holds and German Panzergrenadiers have arrived to make sure it continues to do so.

At this point we ended the game.  There was one more turn to go, but it wouldn't have seen any objectives change hands.  A victory for the Italians!

Having looked at the Wikipedia entry again and noting the game scale, one square is 1 km across, then my estimate of the centre of objective being Fort Capuzzo is a bit off.  More likely it is Sollum Barracks and the other objective Musaid (not Point 208), but then again with a bit of wargamers' artistic licence...

Rommel gives a great game with plenty of command decisions and not too much fighting the rules or relying on lucky dice rolls.  The only thing that I am not happy with is the outflanking rule, and having reread the rule I think this is more my problem with interpretation.  However I have found I was making a mistake with retreats which, if they go two squares, cannot end adjacent to the square in which the combat took place.  I might do a seperate post on this.