A Walk in the Dead Woods

I've been wanting to do some more Songs of Blades and Heroes for a while.  I also wanted to move towards a campaign if possible.  My chance game when my planned game of Impetus was delayed.  Songs quickly stepped up to fill the void.

My aim was to keep it simple, but provide context.  As such the Goblins were all Q4 C3 and the Skellies Q3 C2.  My justification for the difference in ratings were that the Goblins were carefully scouting the area, but better armed against the more ravenous Skellies and their improvised rusty weapons.

The Goblins, under the ruse of walking their dog, were attempting to scout the wood.  It had six locations and they needed to visit each one and then return to complete the mission.

The dog was on random control.  First throw a dice, halve and round up.  That gives the number of dice to throw for activations for the dog.  It was Q3 and well motivated to sniff out bones...

After throwing the number of generated activation dice and seeing how many passed the Q test, that then propelled the dog in the direction of the various locations, based on a dice roll (each location was numbered 1 to 6 making this very easy).  It would move Long in the direction and multiple actions could see it running all over the place.

If it succeeded in coming into contact with a location it would have a sniff and see if it found any bones.  One dice was thrown and the resultant value used to throw further dice.  For each of these subsequent dice that were equal to or more than the Q value of a Skellie, a Skellie popped up (so 0 to 6 Skellies could appear each time the dog visited a location).

If on its activation roll the dog threw straight 1s, it is considered to have soiled the environment, angering the local Dryad.  A dice was then thrown and the Dryad placed (or moved if already on the table) to the associated location.   The Dryad is a static creature otherwise and is a Q5 C4.  On the turn of her placement she will attempt to lure any Goblins within Long to her and fight them.  The Dryad (and the dog) can not be killed.  If defeated the Dryad is removed to reappear later if the dog does it business again.  To test the allure of the Dryad, a competitive die roll is made between the target Goblin and the Dryad, each adding their Q value.  If the Dryad wins the Goblin is moved to the Dryad which them attacks the ensnared Goblin.  (I think this process can be improved on using the basic Songs mechanics.) 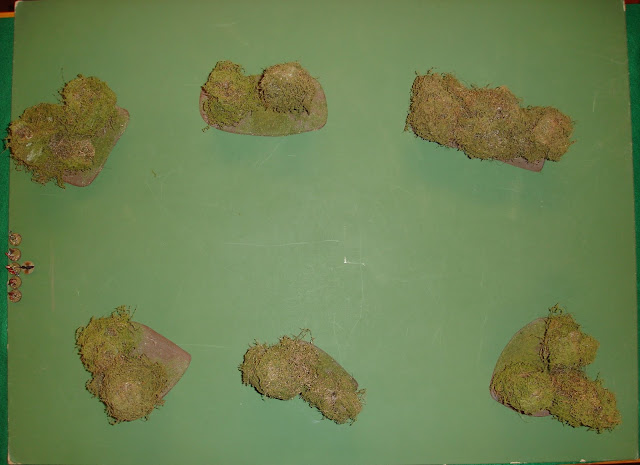 This was the set up with the party of Goblins and their dog, Precious, entering on the left.
The locations were numbered 1 to 6 going clockwise starting at the top left hand corner.

Mark B controlled the Goblins,
Stephen N the Skellies
and I umpired, rolled for the dog and the Dryad. 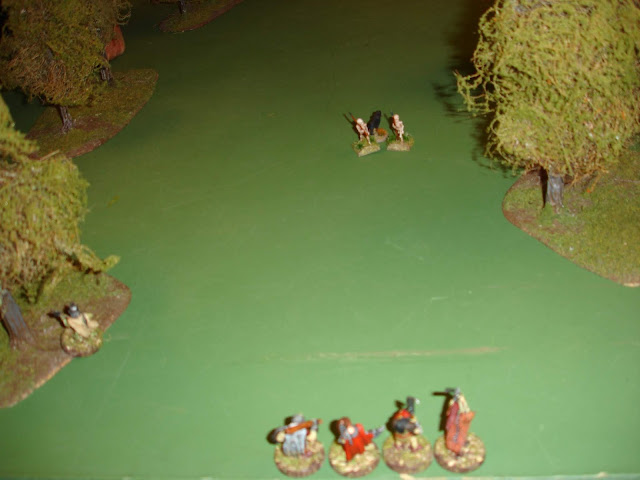 Immediately the dog dashed to location six
and dug up two skellies who then moved to the centre.
The Goblins scouted location one. 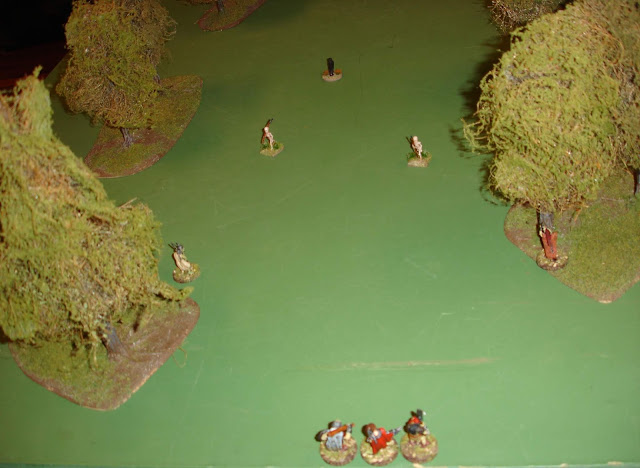 The goblins then scouted location six while the dog shot off,
hopefully not to do any more digging or to disgrace itself. 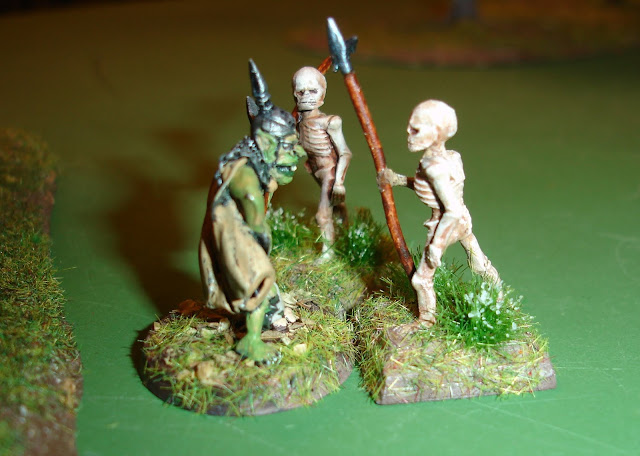 The Skellies attack a Goblin! 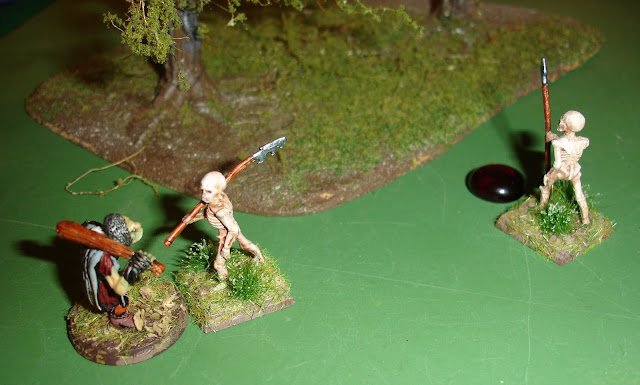 After dispatching that Goblin they then went after another.
This was the start of a hopeless set of low die rolls by Mark,
matched by high rolls from Stephen. 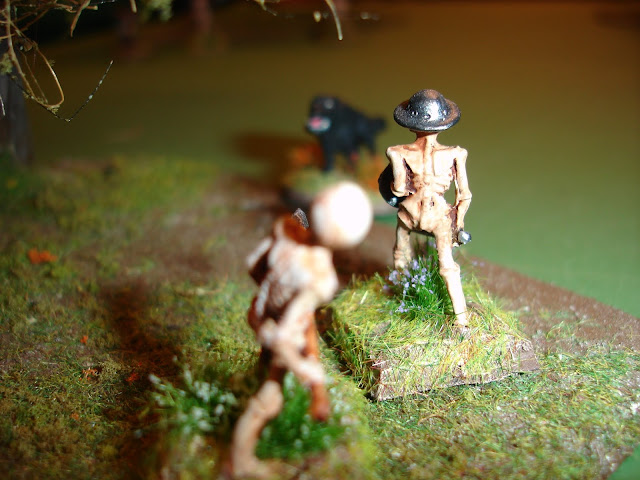 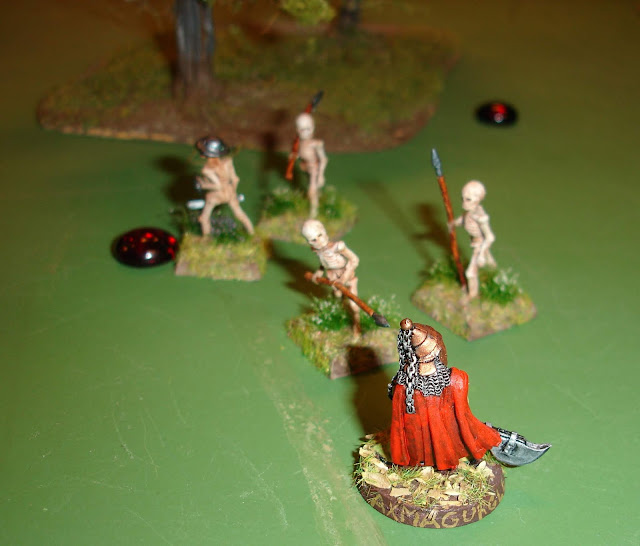 The Goblins seem paralysed by fear. 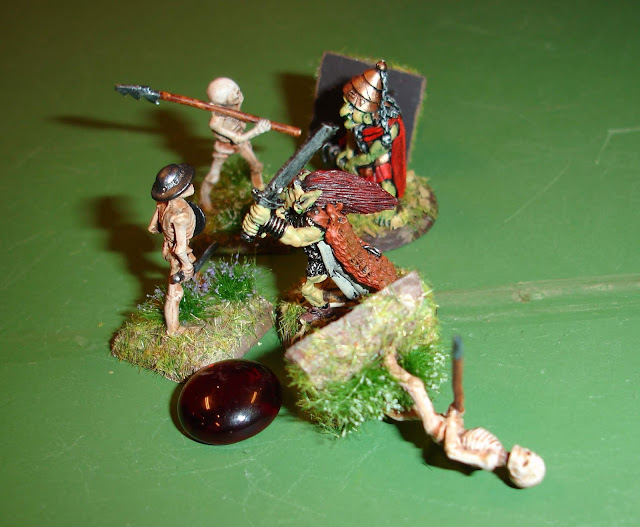 But they fight back. 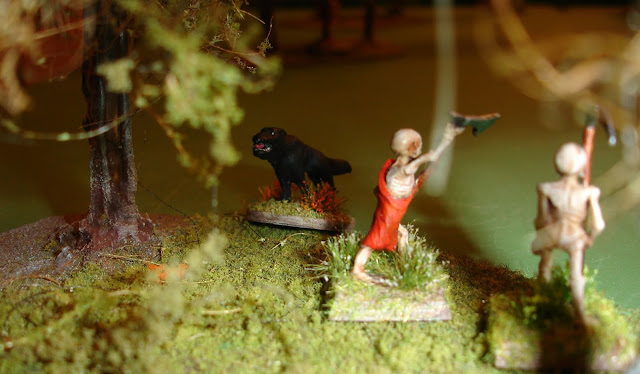 Meanwhile the dog is having a grand old time digging up lots of old stinky bones. 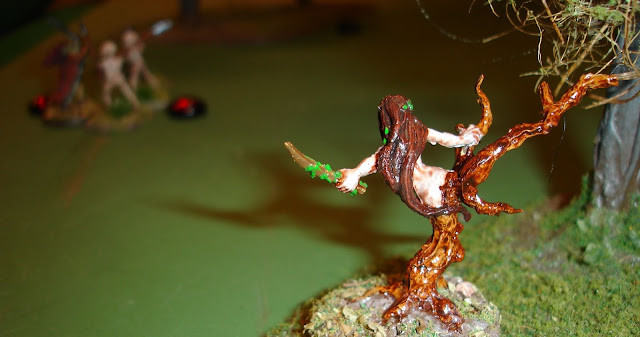 The Dryad was angered by the dog fouling everywhere,
but luckily for the Goblins she was too far away to try out her charms. 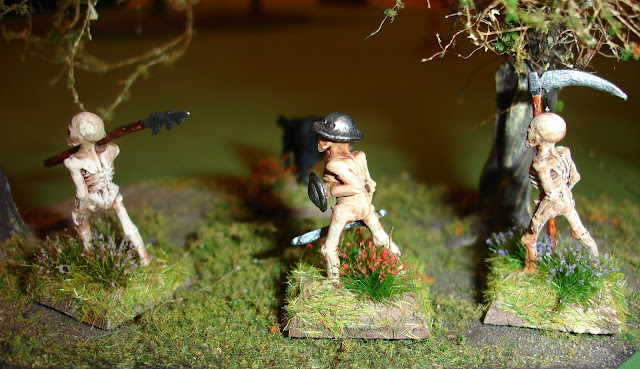 Bones on the march,
much to the dog's supposed amazement it is assumed. 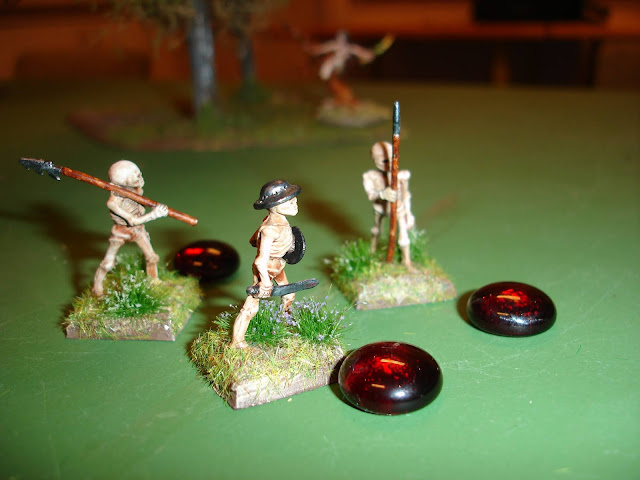 Email ThisBlogThis!Share to TwitterShare to FacebookShare to Pinterest
Labels: Fantasy, Songs of Blades and Heroes