First it was on the ANF, principally Julian, to come up with a set of rules that would work for grand fleet actions and he has done just that, with the eponymously named Grand Fleet Actions in the Age of Sail set of rules by A and A Game Engineering.

Second and more harrowing, is on me to do justice to the grand game we played on Saturday with this blog post, which I fear is already late.  James got in first with his post here.

The only real challenge we faced, in what is a very large naval game, was ship identification.  There is not a lot of differentiation in the SoG models, but Julian had numbered his ships.  However this numbering was on the shiny black bottoms of the vessels in a shiny dark blue.  To read them required picking up and a lot of peering.  Some discussion was held about adding tiny, numbered pennants. I know for my SoG models that it can get fiddly, but adding flags certainly lifts the beauty of the models.

I still reckon the SoG ships are a sorry tale of missed opportunities.  Having seen how well Zvedza can manufacture things (and Kinder Surprise for that matter), it should have been possible to have removable masts with different sail settings and displaying damage etc.  Also the boxing with all the SoG paraphernalia is a mistake.  However I am sure there were some good business reasons for why things turned out as they did.  End of grumble.

Sadly I do not have the OOB and so I will be naming squadrons after the players, not the historical counterparts. 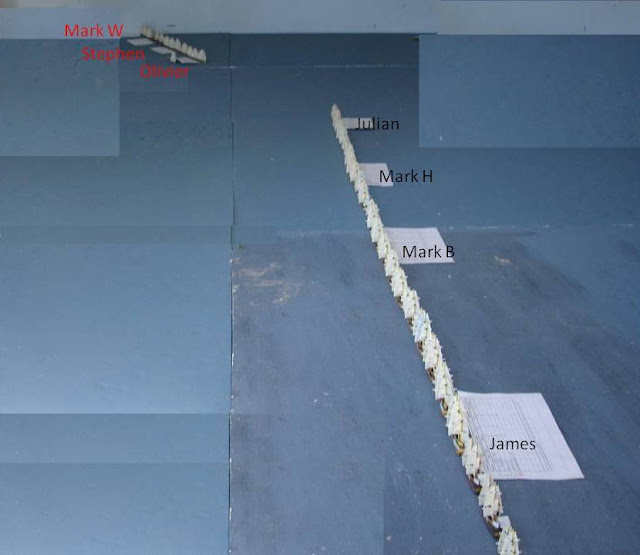 Each side had four squadrons.
Julian had the lead French squadron followed by myself,
then Mark B and finally James in command of the Spanish.
The British were lead by Olivier,
followed by Stephen and Mark W
with their fourth squadron hidden by the fog.

The battle was fought in fog and to reflect this command radius had been halved, which resulted in ships sailing in line astern (I think that is the proper naval term) to keep in command.

Also note, the paper next to each squadron was all that was required to keep records of damage etc.

Just the British fleet, aiming to intercept and destroy their rivals. 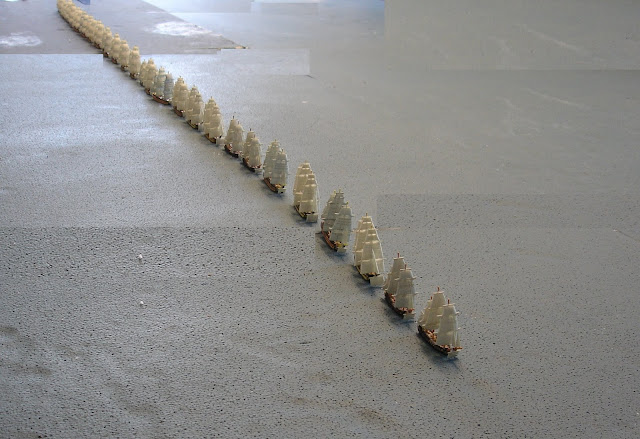 The French fleet seeking to exit the the sea zone. 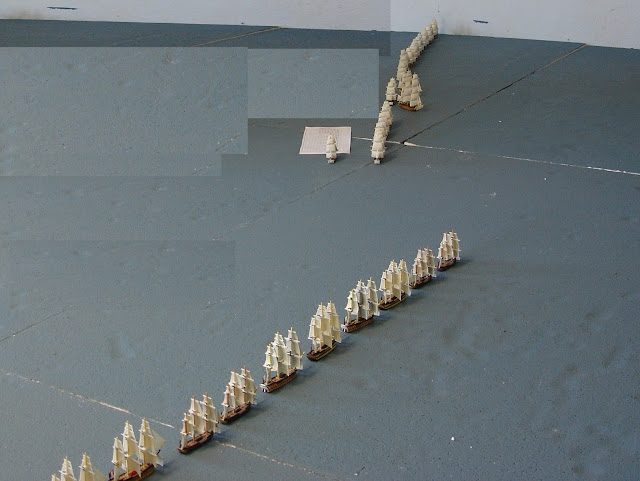 The French had the wind,
it is possible that this hampered the British,
but we'll see...

As Julian's squadron nears the enemy,
the forward two British squadrons start to open up like a set of jaws. 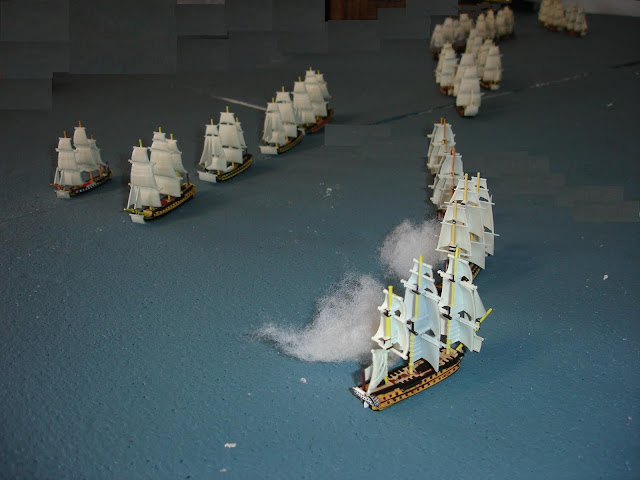 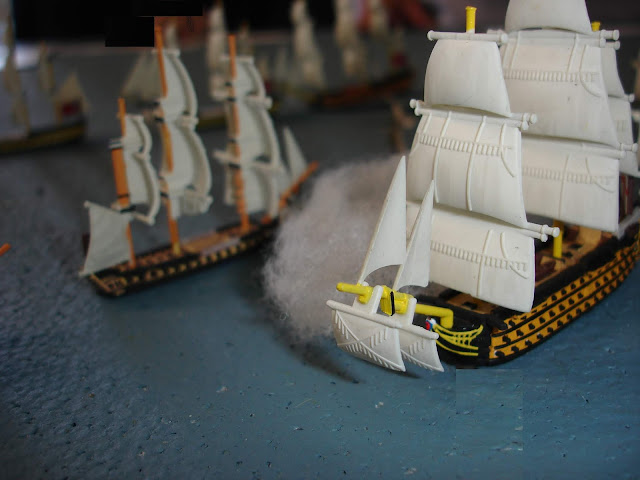 But then it was time for Stephen's ships to come up,
and blast away at Julian's ships. 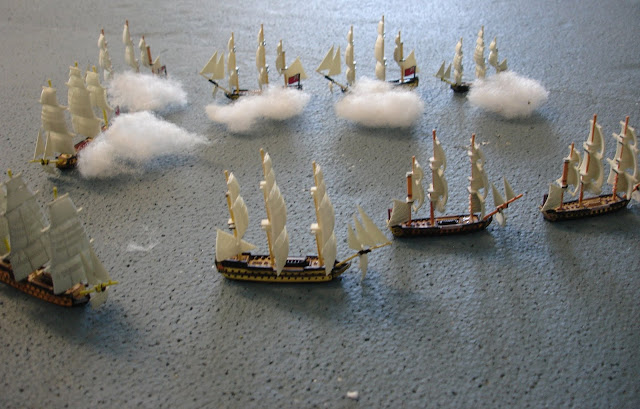 Olivier's ships get to return fire. 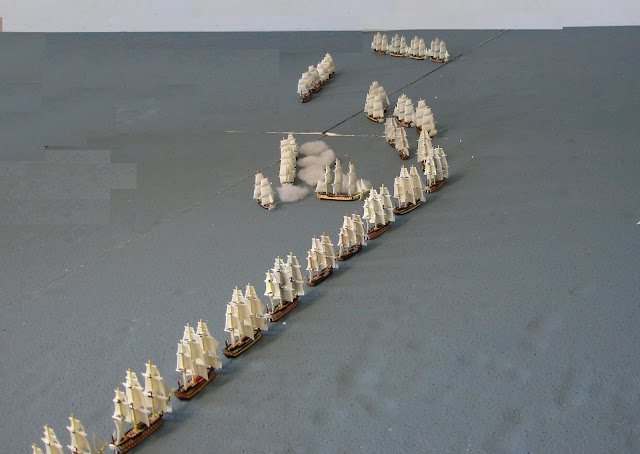 Julian's squadron is now heading down the throat of the British.
Mark W's squadron is coming up to close the trap.
Julian is doomed! 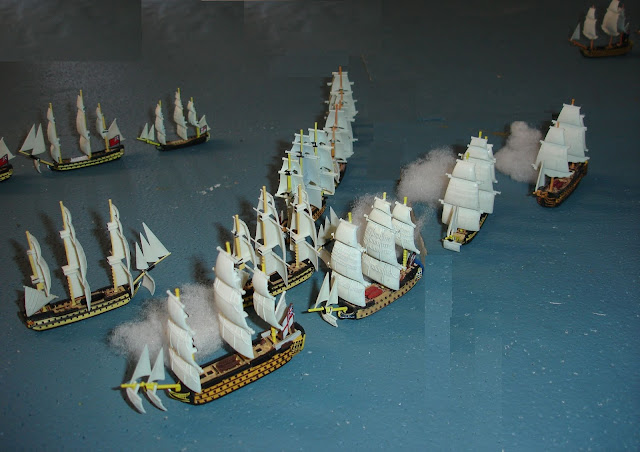 Stephen gets another set of broadsides in against Julian. 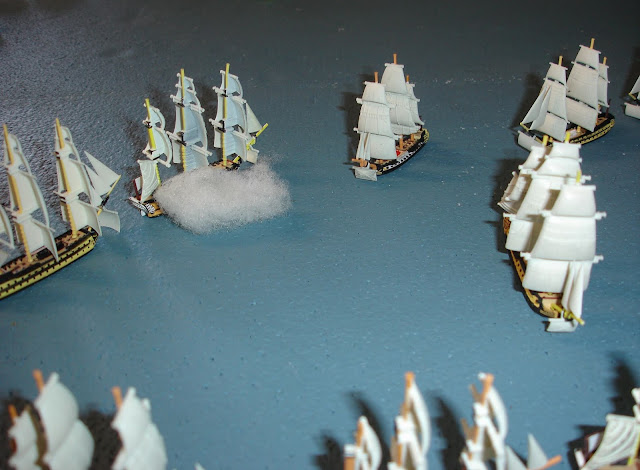 But now my squadron has come round to engage Olivier's ships,
which are trying to bear down on Julian's now somewhat fragmented squadron. 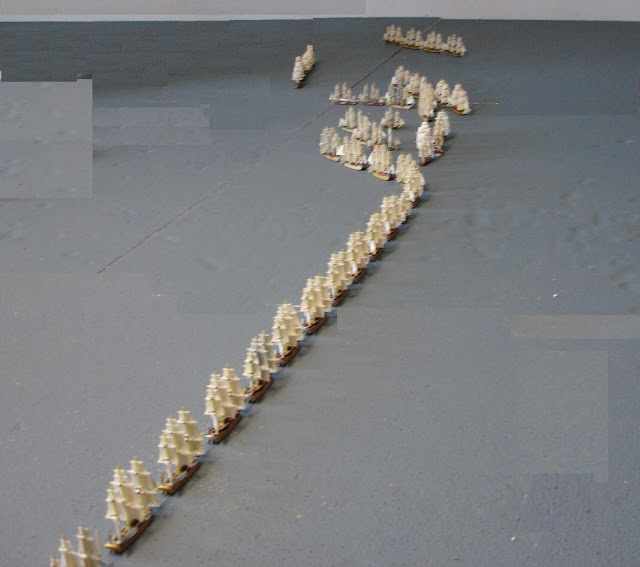 Julian is pulling away to port into the path of Mark W's four ships of the line.
However Olivier's ships are trapped between mine and Julian's tail. 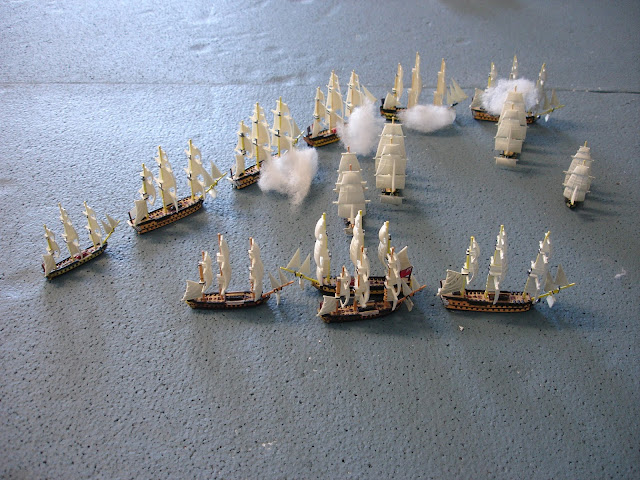 Olivier's ships take a pounding.
Worse, his flag is lost in a failed boarding action.
Can it get any worse? 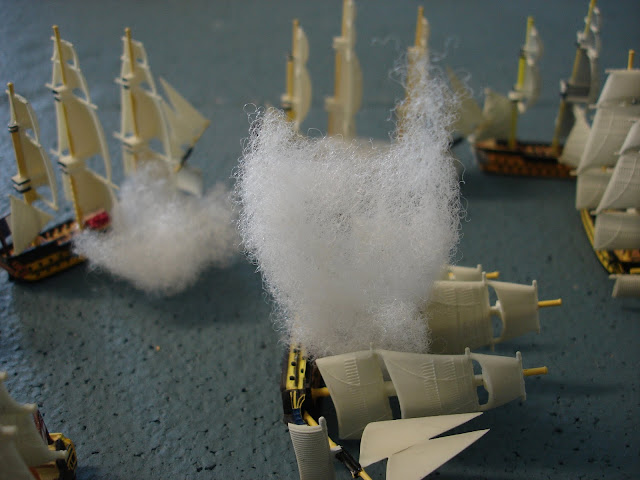 Yes.
Damned fine dice rolling by me causes one of Olivier's ships to explode! 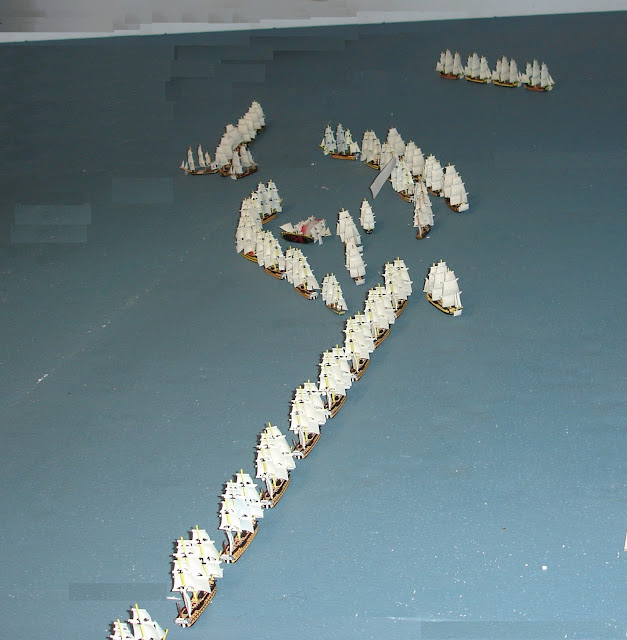 Julian's ships are taking a battering from both Stephen and Mark W's squadrons.
But Mark B has now come up and will give Olivier some more heat. 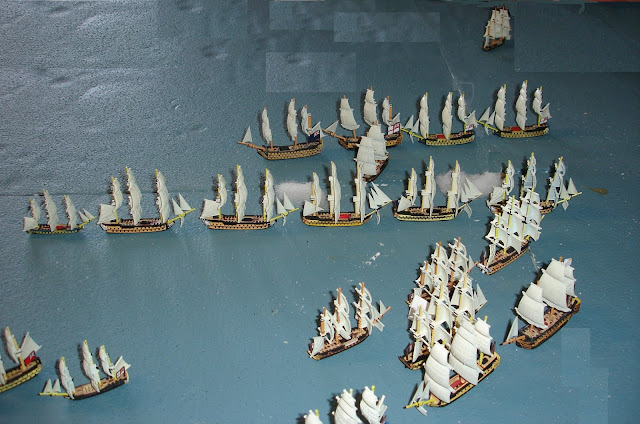 Julian's two lead ships have been dispersed by Mark W's squadron
which is now attempting to engage my squadron.
My ships return fire, carefully trying not to hit one of Julian's damaged ships.
Stephen has failed to seriously damage Julian's squadron
and is possible going to Olivier's rescue, or not...

Hopefully the labels make things a little clearer in the above image.
My squadron is the thin blue line, Julian's the slightly thicker line.
Mark B's squadron is now engaging both Olivier's and Stephen's squadron.
However Oliviers squadron is so wrecked and demoralised that it is no longer a real threat. 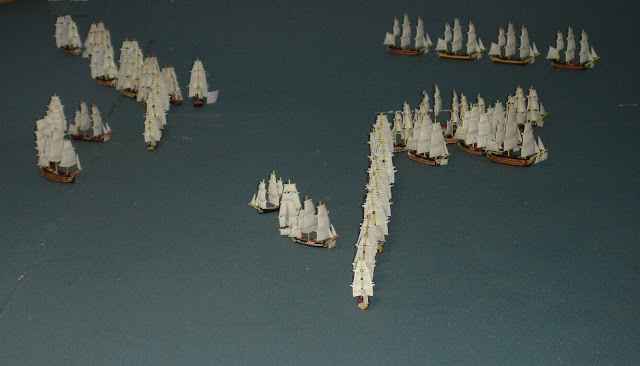 Olivier's ships struggle down the line, now coming under fire from the Spanish ships.
Mark W's ships have turned to come down on the rear of my squadron,
but will not cause any serious damage.
Mark B's lead ships are engaged with Stephen's... 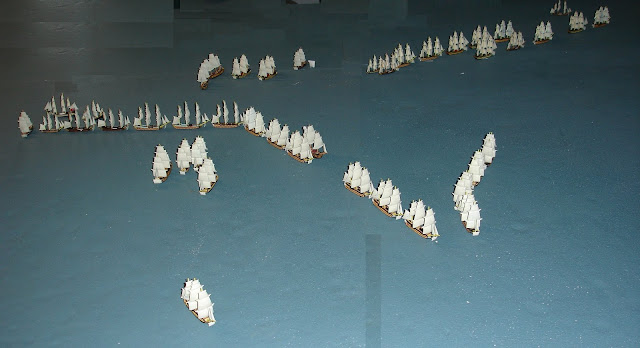 My squadron and Julian's have now broken free and
even some of Julian's previously lost ships have regained their colours.
The British reserve squadron has now come up against Mark B's squadron
which has broken through Stephen's ships.
(There is actually a bit of intermingling, but it would spoil the image to label it all up)
Olivier has sailed harmlessly past the Spanish who will now engage Mark W's squadron.

And there it came to an end, with Julian declaring he would fight on alone, if necessary.
Posted by Sun of York at 1:37 PM

Email ThisBlogThis!Share to TwitterShare to FacebookShare to Pinterest
Labels: Grand Fleet Actions in the Age of Sail, Napoleonic Naval, Sails of Glory