After refighting Auerstadt with the ANF last year using Shako, I was keen to try it with Napoleon's Battles.  It would mean using my late war Prussians (and some Russians) as early war Prussians, but so it goes.

I was pleased to find there was a scenario already for the battle that was published with the first edition of the rules.  I decided to test it using just the opening turns on a small table area - four foot by three foot, rather than the nine by five.

We tossed dice with the highest roll going France.  Stephen used a D6 while I used a D10 (this wasn't deliberate).  Our first roll was a draw.  On the second roll he threw a 2.  I threw a 1.  I was happy to go Prussian as my knowledge of the rules would give me a good advantage and allow me to test my theory that this would be a Prussian walkover. 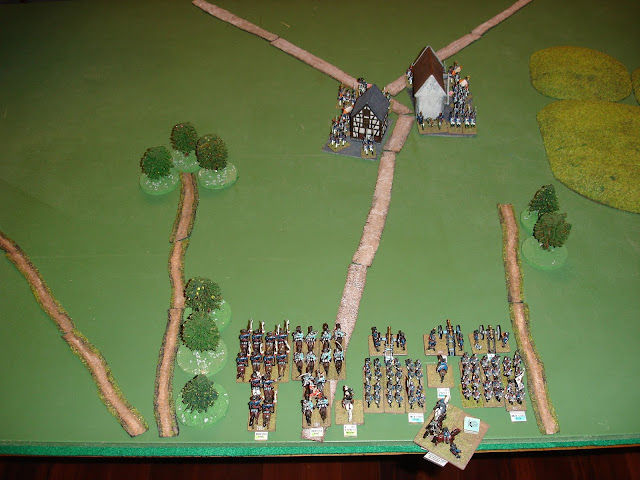 The French 3rd Division is deployed at Hassenhausen.
The Prussians approach.

On the small table the Prussian Cavalry Reserve (Blucher) and their 3rd Division, just don't fit on.
This is not so much a table size issue, but one with the scenarios never allowing enough space for units (the Borodino scenario is a classic for this problem). 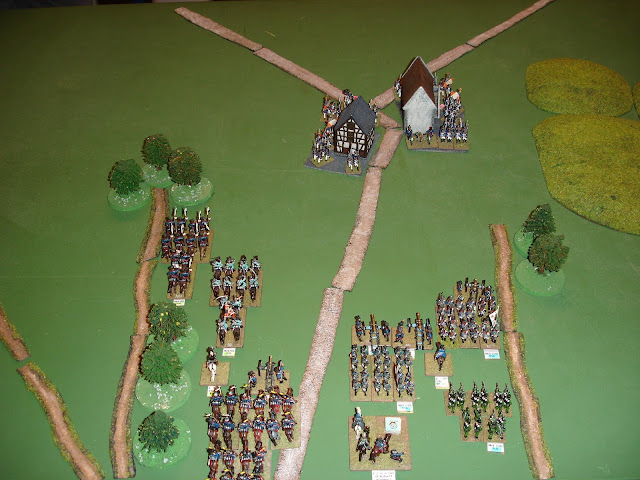 With the 08:30 Prussian turn complete, everyone is one the table. 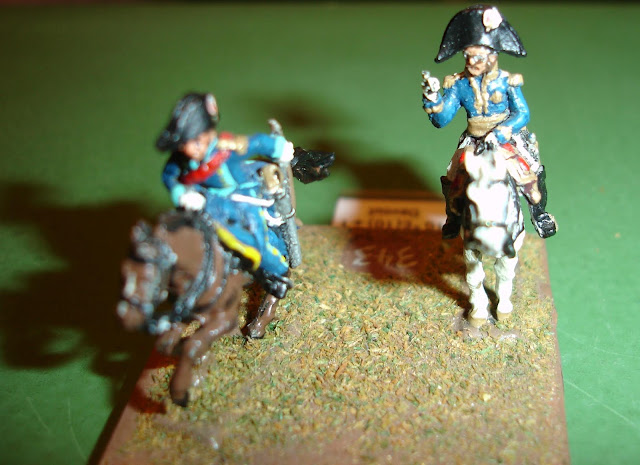 Davout sends a message to Gudin that help is on its way. 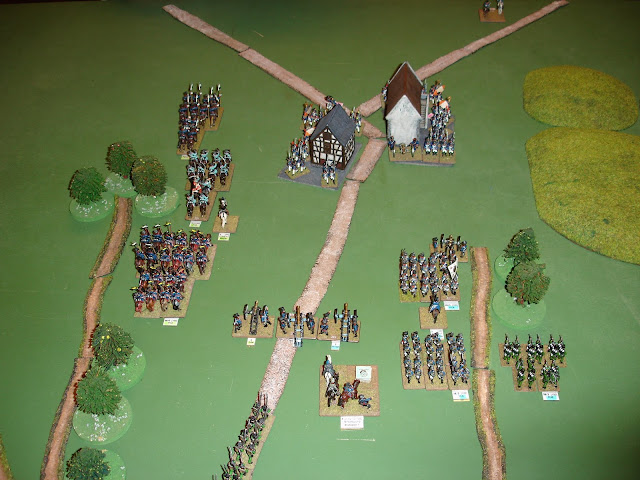 End of the 09:00 Prussian turn and their 2nd Division has now entered.
Blucher is moving up on the French right flank.
Prussian guns are now in range of Hassenhausen. 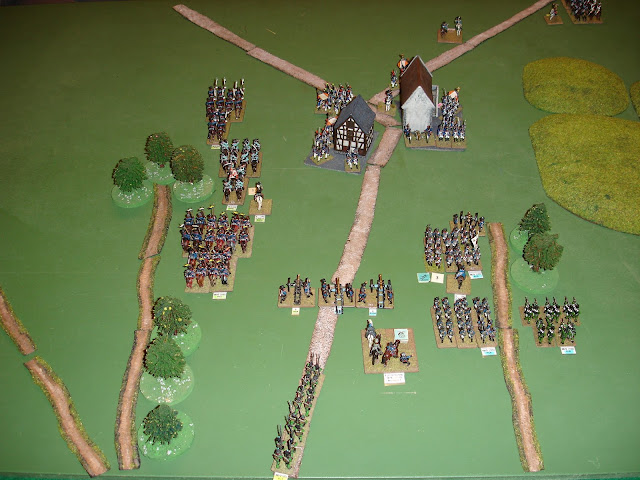 At the end of the French 09:00 turn, their cavalry had arrived.

I was being rather cautious with arrivals, assuming they all stayed in march column, moving at the speed of the slowest unit to maintain cohesion and command.  A bigger table area would have made a difference. 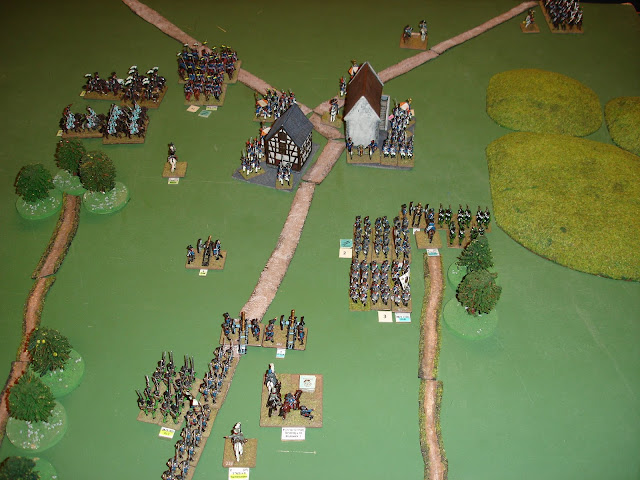 Prussian 09:30 turn sees a few problems getting troops to fit.

While Brunswick has an 18"command span, this doesn't allow for much when he also has to manage troops coming on.  The French have scored numerous hits on the Prussian infantry and this is slowing them down (due to becoming disordered). 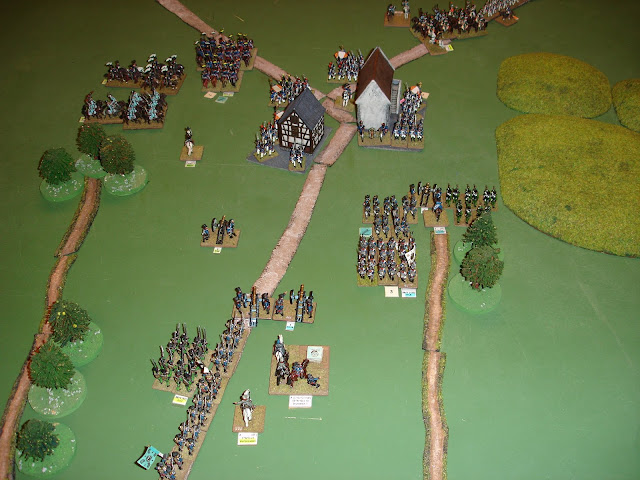 French 09:30 turn sees their cavalry in range of the Prussian flanking cavalry.
Will they charge? 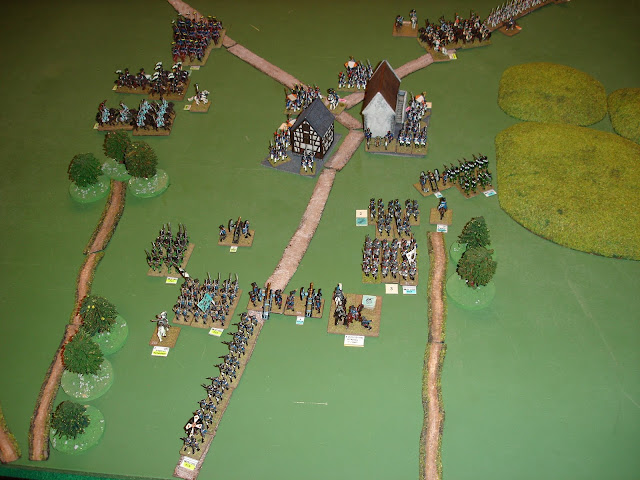 By the Prussian 10:00 turn, they have been able to move up some infantry,
but also pulled back their cavalry to avoid skirmish fire from the French defenders. 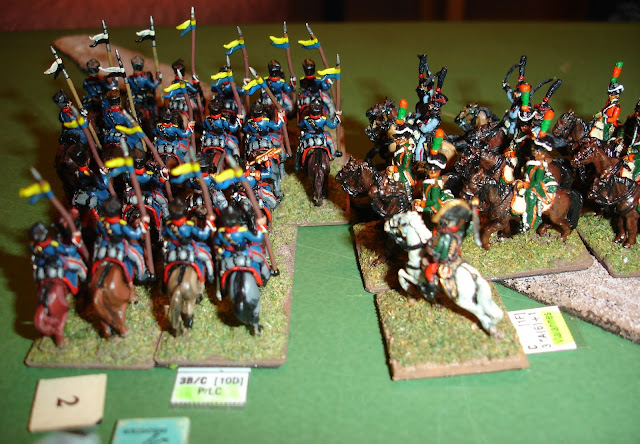 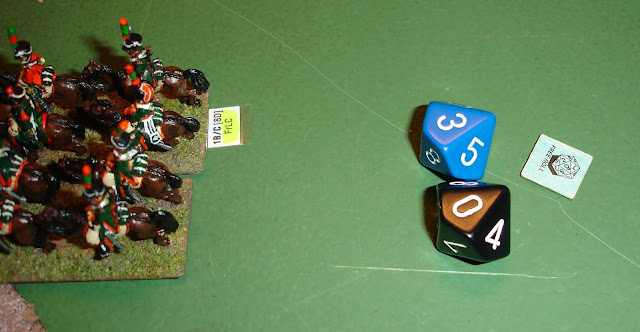 The French have a bad die roll and use a Free Roll to recover
and win the combat. 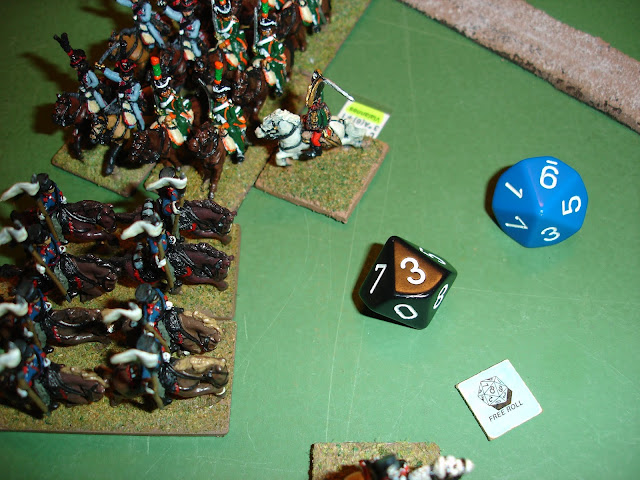 The French go on to charge more Prussian cavalry.
This time it is the Prussians who use a Free Reroll to recover the situation. 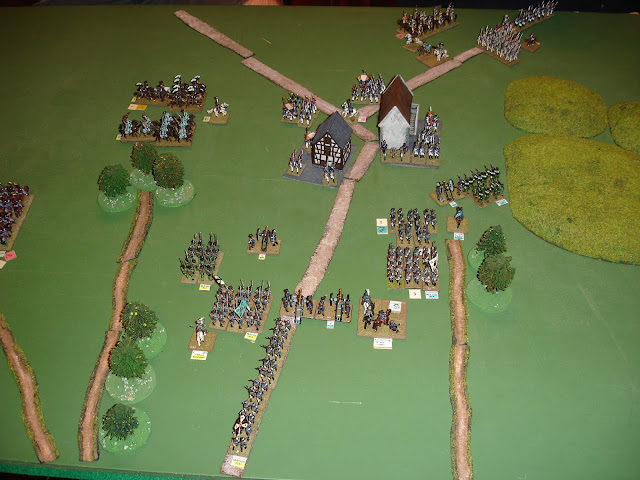 End of the French 10:00 turn.
The French 2nd Division has now arrived.
Both sides have cavalry to rally.

I use the optional fourth edition rule that gives units a chance to self rally (and self command) without the aid of a commander (essential for the Prussians). 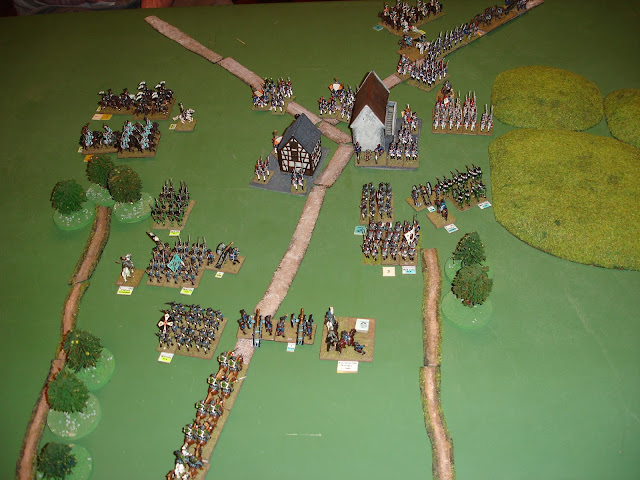 End of the Prussian and French 10:30 turns.
Prussian fire on Hassenhausen has not been very effective.
The French fire on the other hand has been spot on. 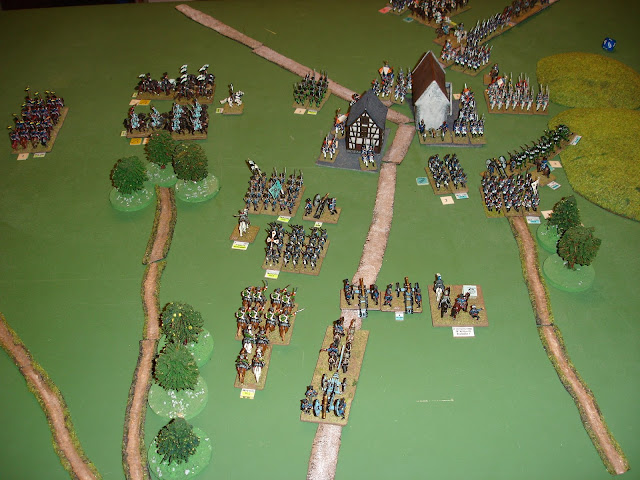 End of the Prussian 11:00 turn.
Their 3rd Division is not looking good. 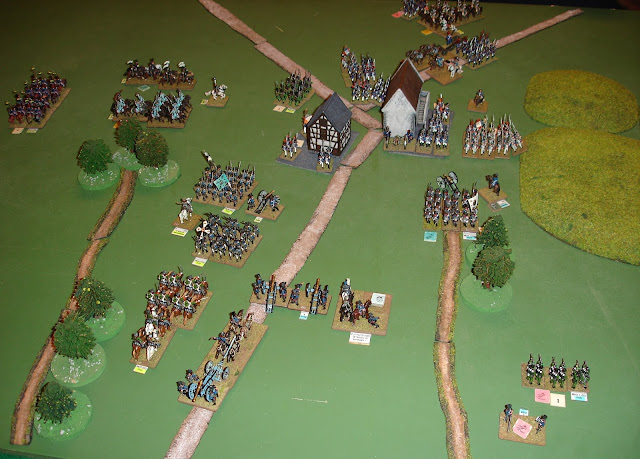 End of the French 11:00 turn.
The Prussian 3rd Division has been fatigued, with one unit dispersed and another routed,

At this point I had seen enough to know that it is not a Prussian fait accompli, but that more table space is required.  I plan next to do it on a 6x4 table.

The terrain is fairly inconsequential, but seem to act to funnel the attack.  The ANF game didn't have this terrain and I suppose more research is required, but for at least a few games, I want to use the scenario as it was.

I think the decreasing morale level for the Prussians as the bad news from Jena arrives should work well.  However making the risk to Brunswick occur on a 5 rather than a 3 is not so good as it is easy to keep him out of harm's way.  More interesting would be having both sides commanders just use their basic response numbers (8 for Davout and 6 for Brunswick) rather than the standard 10 as the CinC.
Posted by Sun of York at 10:05 PM