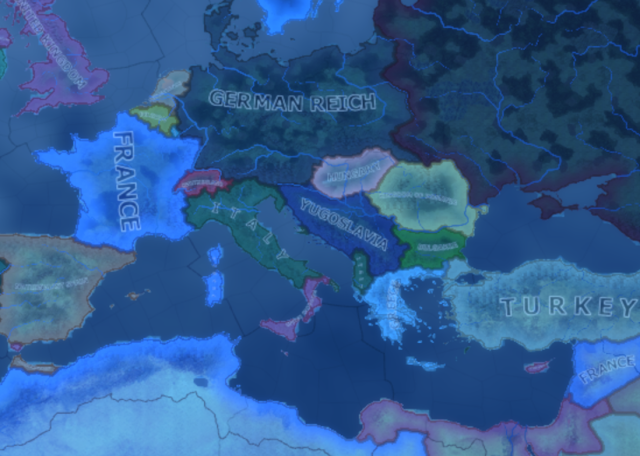 Army reforms start with improving the colonial troops fighting capabilities, which is effectively turning selected brigades into divisions with plenty of artillery and support troops.

The naval battle in the Eastern North Sea turned out to be ineffective.  The Axis airpower is formidable which makes it a risky affair, as the British were to later find out.

21 September 1939 Hungary join the Axis.  At the Second Vienna Conference Hungary is given North Transylvania.  Bulgaria also gets part of Romania under the Treaty of Craiova.

More news from the Balkans, on 16 October under the Treaty of Varma Yugoslavia annexes Bulgaria.

Our focus switches to building up our industrial capacity in Algeria.  We need every factory we can get.

The UK is involved in heavy fighting in southern Italy.  I send de Gaulle to help, but it is too late and I luckily pull him back before he lands.  Noting that the Danes are having success in the Dodecanese I send him to capture Rhodes, which he does on 30 November.

The UK lose some carriers in the East North Sea.  Bad as we had just decided that they would be of better use in the Pacific to counter a potential Japanese threat.

We start the production of medium tanks.  It will be a slow process.

The USSR declares war on Finland.

Germany launches a winter offensive against Belgium and Luxembourg.

Naval battles rage in the East North Sea and Tyrrhenian sea against Axis remnants.  It takes time to catch the Italian ships, but this is done.  However the UK feet gets mauled in the North Sea (something went wrong as the British fleet was supposed to break off, but refused to budge).

The Italians launch an offensive in the southern alps.

We focus on building up our industrial capacity, including developing Algeria.  We also continue fortifying the Pyrenees.

9 January 1940 and the USSR and Finland sign a peace treaty.

In a surprise move the Belgians launch a counterattack and capture Bitburg.  The UK and France rush troops to join in the counter offensive against the Germans who must of worn themselves out with their offensive.

The British fleet remains unable to extricate itself and is losing capital ships.

However their forces in southern Italy suddenly find themselves in possession of Taranto again as the Germans have pulled out (as presumably they need troops to defend the Rhine).

We launch an attack on the Italian front, but winter fighting in the southern alps is a mug's game and we soon call it off.

There is heavy fighting on the Rhine.

The UK are starting to overrun southern Italy. 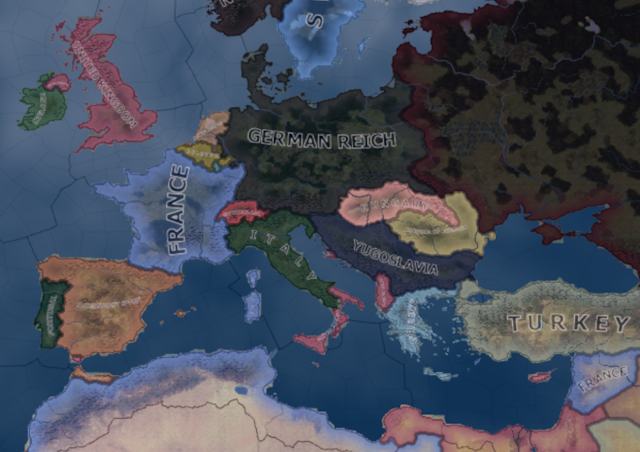 This is from January.  Come mid February, the pink wave is half way up Italy.