After the preparation comes the real thing.  Last Saturday at the NWS club's games day I umpired Auerstadt, using the scenario from the booklet that came with the first edition of Napoleon's Battles, but cut down to fit on a 6x4 table. 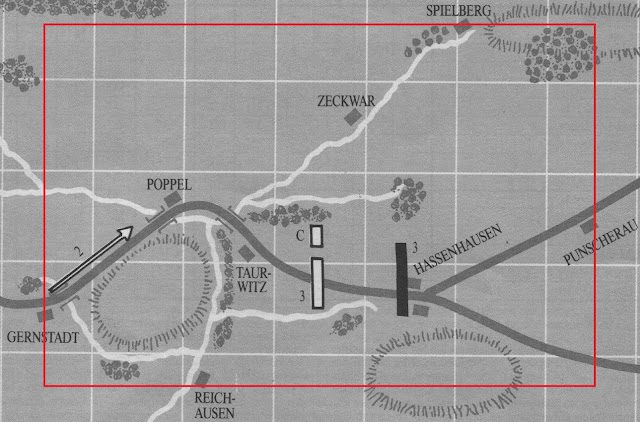 The area in the red box represents the area I went with as it included all the villages and effectively just delayed entry by one turn for each side (assuming they were moving at the speed of the slowest unit in the formation).  I left the morale changes as per the scenario and thought everything would be fine...

Mark B took command of the French command, Stephen N took on the role of Brunswick with direct command of the Prussian Third Division and Blucher's cavalry Reserve.  Mark of the ANF took control of the remaining Prussian forces as they arrived.

I left the order of battle as is, although my research showed that for the Prussians it could be updated or at least an option provided.  Part of the problem with depicting Prussian army organisation of this period (1806) within Napoleon's Battles is that they were still using an 18th Century system of Lines and free attachments of regiments to commanders, including on the very day of battle.  This means that available Prussian OOB information is a bit confusing.

The stream was fordable with no additional penalties, however given the NB movement penalty modifier requiring the depth of the unit to be considered, it would mean crossing in march column, particularly for artillery, would be particularly slow.  Given march columns include wagons etc this is possibly reasonable and that troops, not able to cross at a bridge, should come out of march column, but then they might have command problems (given that being in march column has the benefit of putting them in command).  Such are the problems affecting the Prussians.

For this game I took the photos after each sides' movement phase, but before combat. 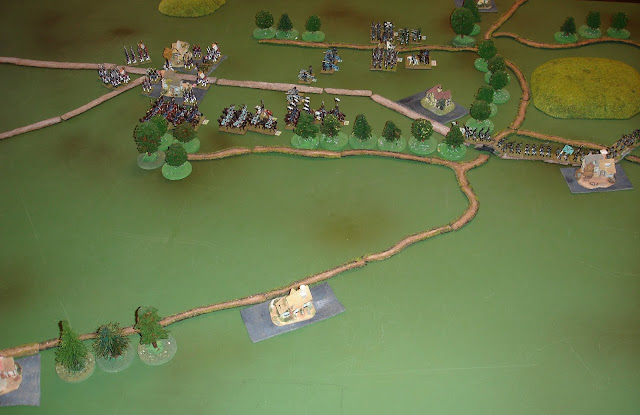 08:30 and the Prussians have moved first. 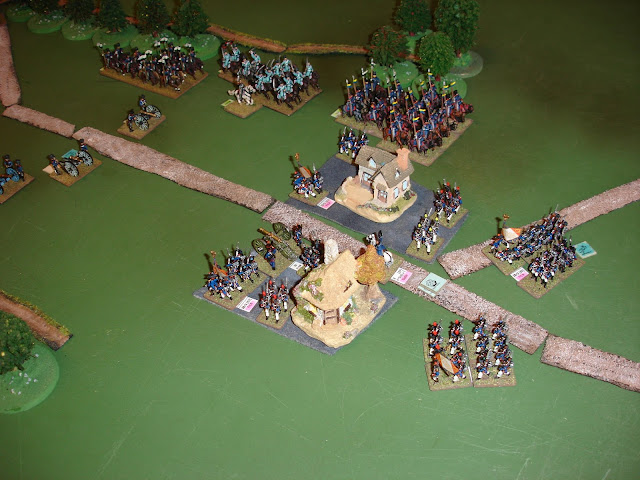 The French sit tight in Hassenhausen.

As they were out of command, and even though Gudin passed, this meant only a half move. That is not enough to allow French line infantry a formation change, but I have a house rule that says it can be undertaken, but results in disorder (hence the far right unit being in disordered square). 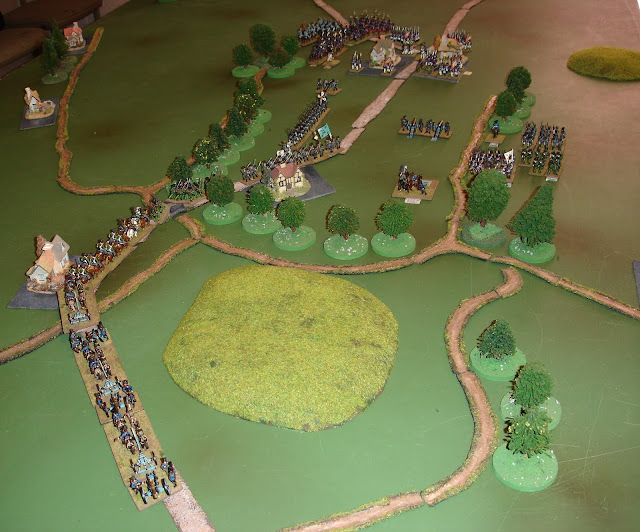 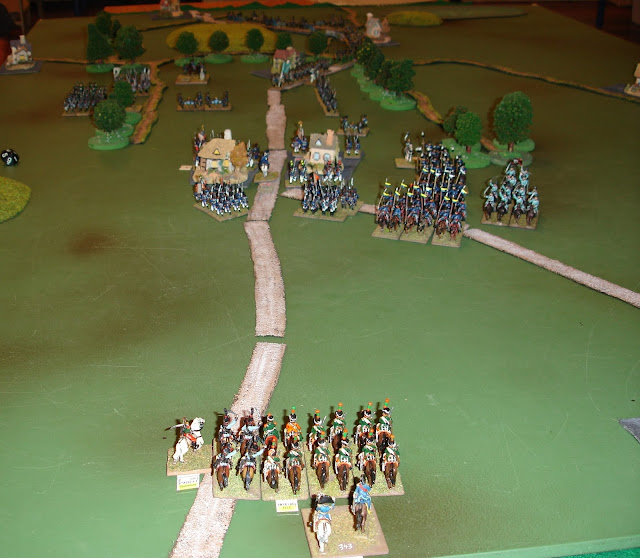 Davout arrives along with his Corps' cavalry. 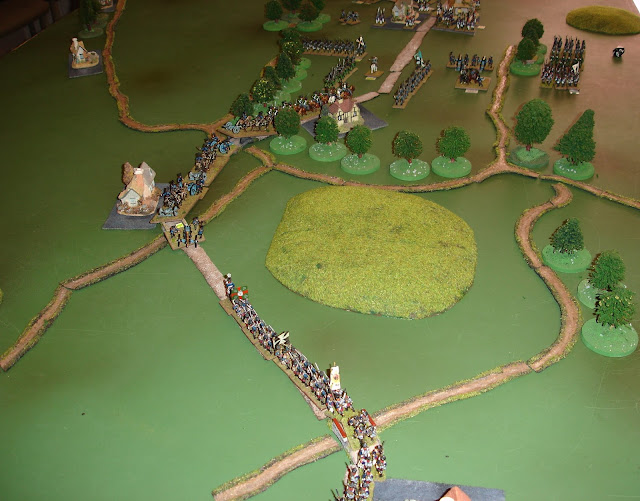 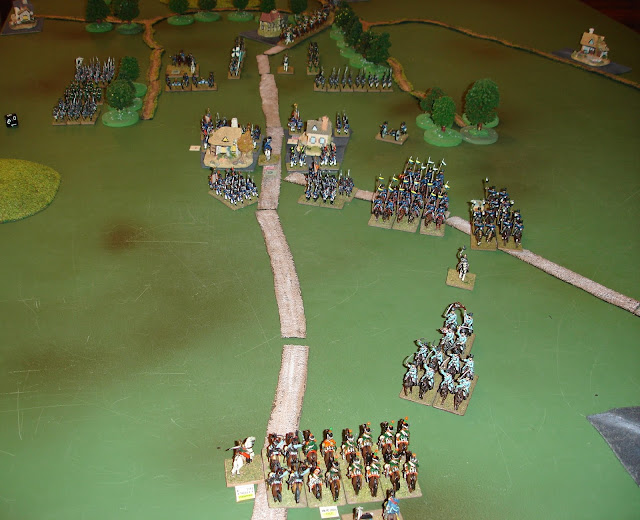 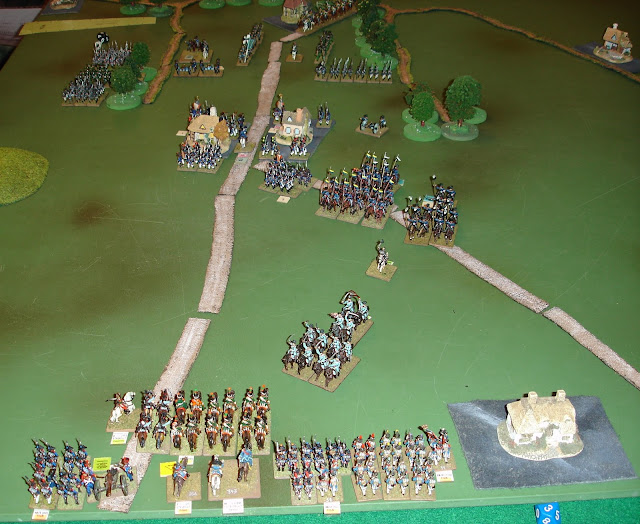 Friant's Division had been held off table and could therefore come on deployed during the 9:30 turn.
I was not too happy about the edge of the table challenge.
What would the dice gods think?

In checking the rules I now find I had made a mistake and for the French to come of deployed and spread out takes two moves, not one as I mistakenly ruled.  Bum! 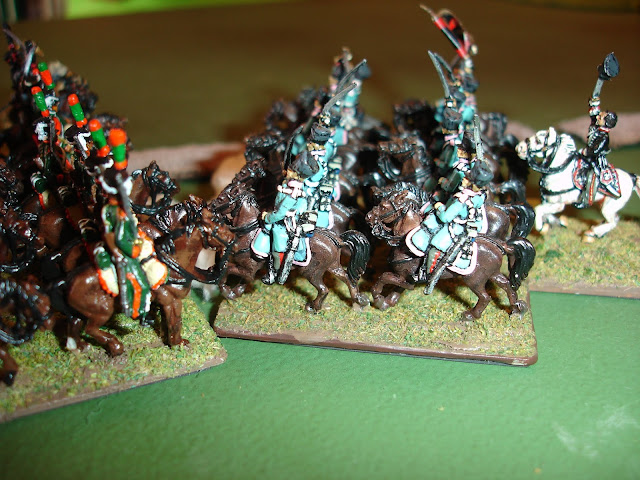 In goes Blucher, should be a walk over. 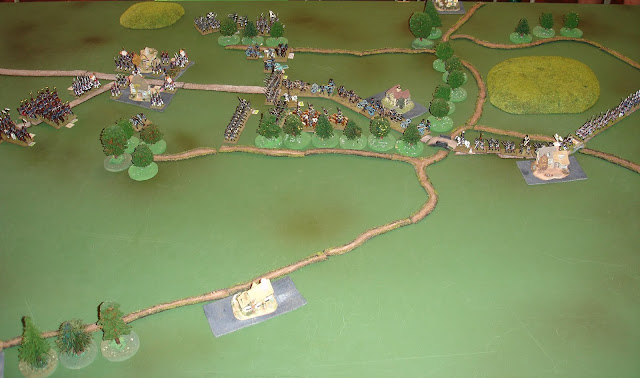 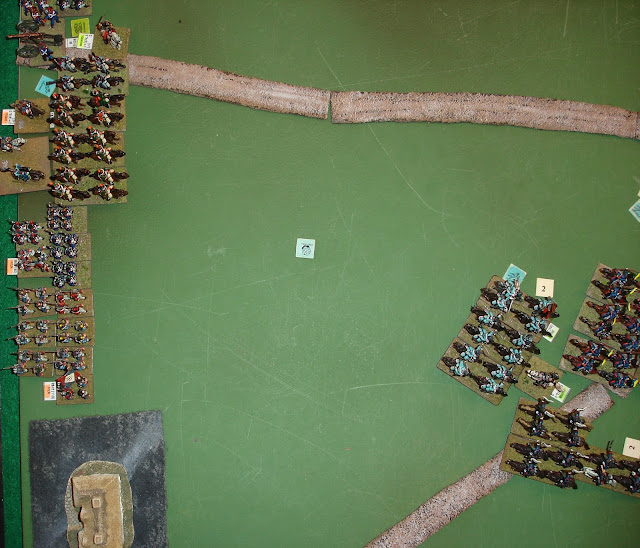 In a skilful use of a free roll chit, the French snatch victory from the Prussians.
Blucher fallsback, but has plenty more cavalry to attack with. 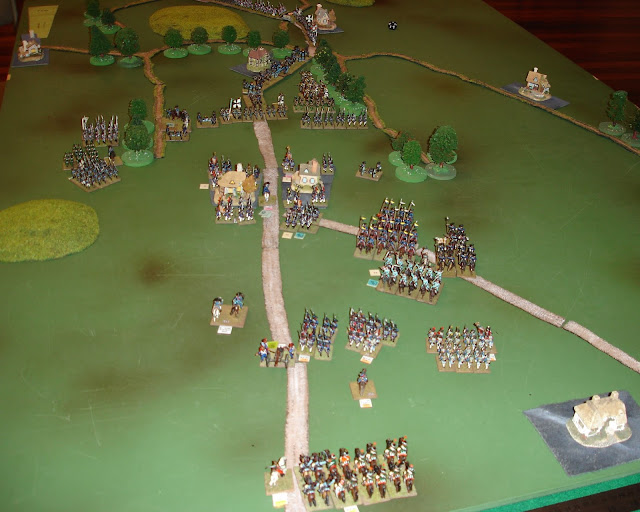 10:30 and Blucher attacks again,
buying time for the remaining Prussians to surround Hassenhausen. 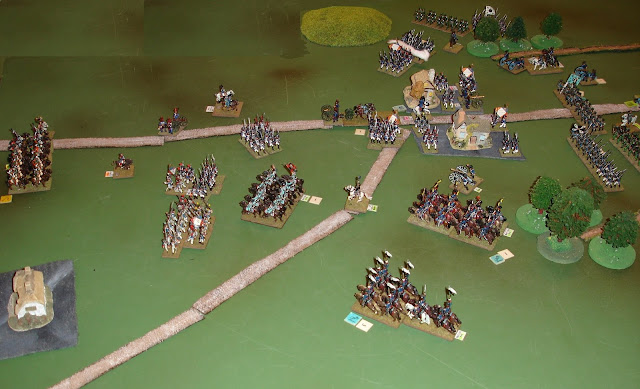 Friant beats of Blucher, but is now stuck in square.
Gudin finds a unit to throw at the Prussians . 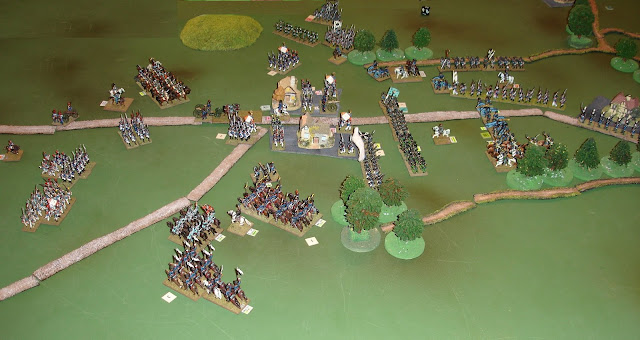 11:00 and what was looking like the start of a successful Prussian envelopment
has now been pushed back, however they are still able to mount an attack on Hassenhausen. 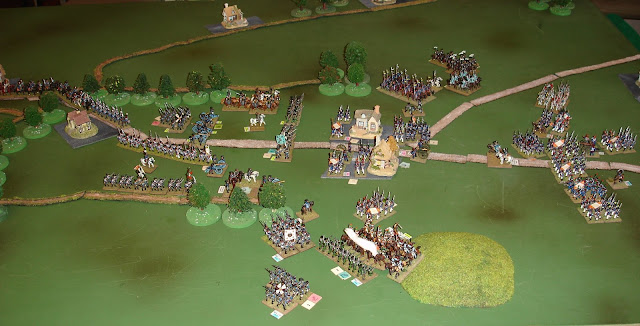 The French hold Hassenhausen and try and exploit their advantage on their left flank.
Morand's Division has now arrived (and again I made the deployment error). 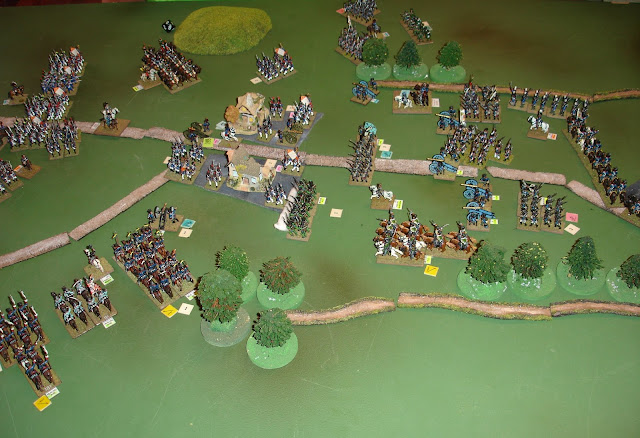 11:30 and Blucher waits for  opportunities while another attack goes in against Hassenhausen. 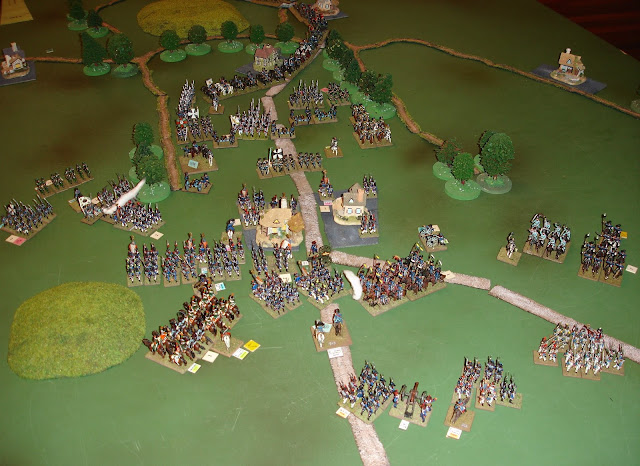 Morand's Division is now in action, perhaps a turn before it should be.  So it goes. 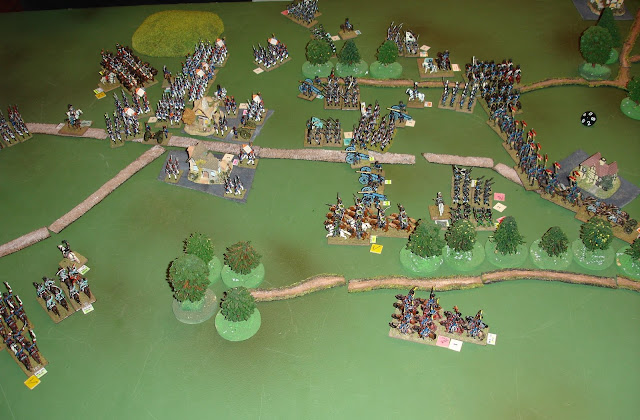 12:00 and the French still hold Hassenhaussen
(and therefore have avoid any negative morale impacts, not that it would have mattered). 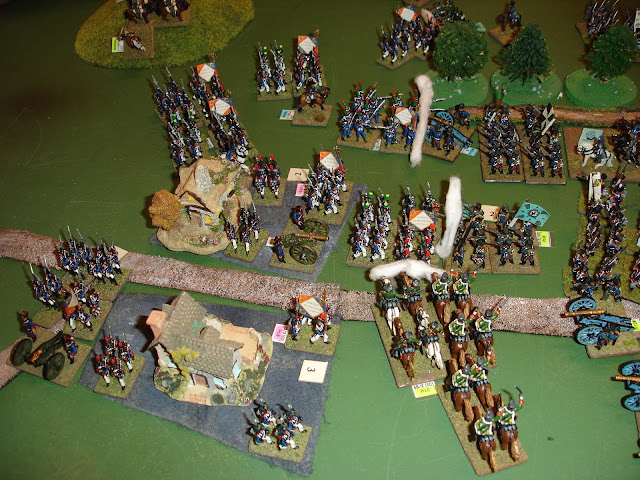 The French attack, but are surprised by Prussian hussars. 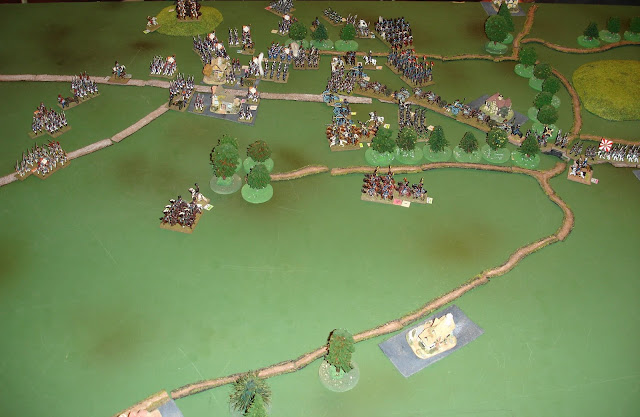 12:30 Prussian Grenadiers now assault Hassenhausen.
Blucher has retired severely bloodied.
The rest of the Prussians are finding the battlefield congested,
and know this will only get worse. 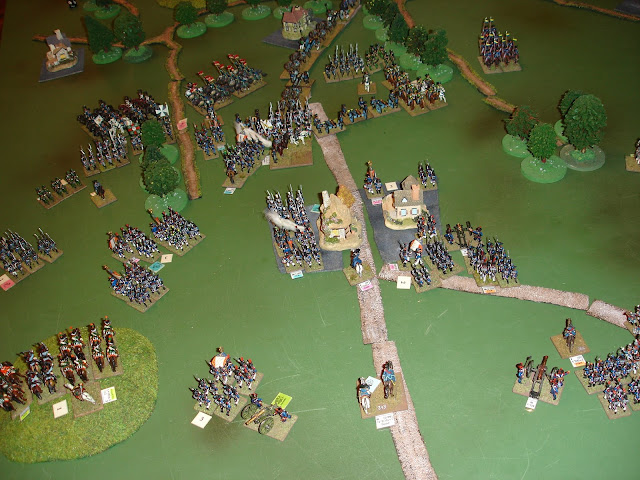 Note:Brunswick is in the thick of the fighting, but despite of his age penalty (increased risk of becoming a casualty 50% rather than standard 30%) he defies history and remains unhurt and mostly in command.  Not once, but twice! 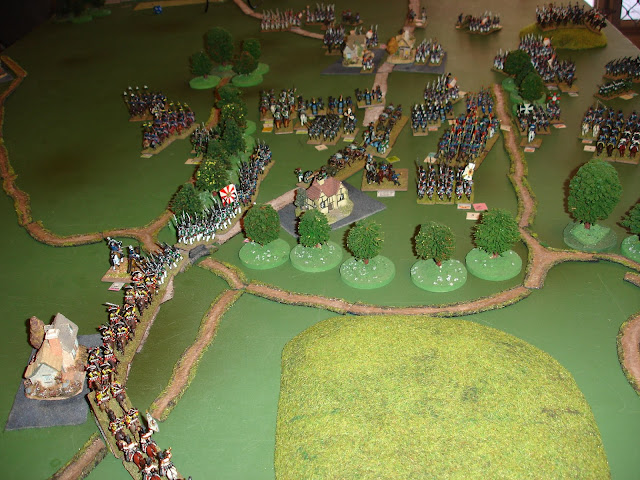 13:00 and the Prussians keep arriving.
(Here we see a unit of Old Glory SYW cavalry painted up as Napoleonic Spanish cavalry in their bright yellow uniforms representing some 1806 Prussian heavy cavalry.  It works for me.) 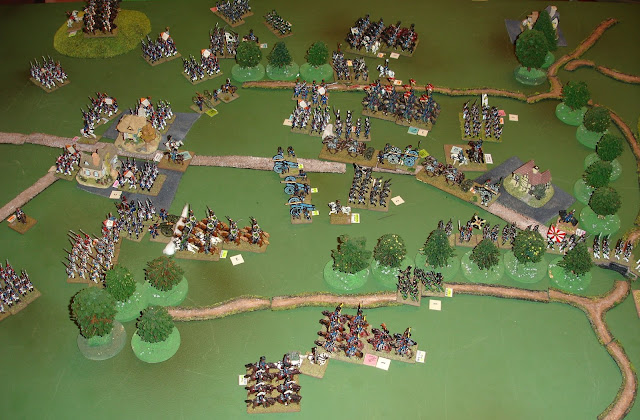 With Hassenhausen secure the French press on.
The Prussians are feeling fatigued.  Will their artillery save the day? 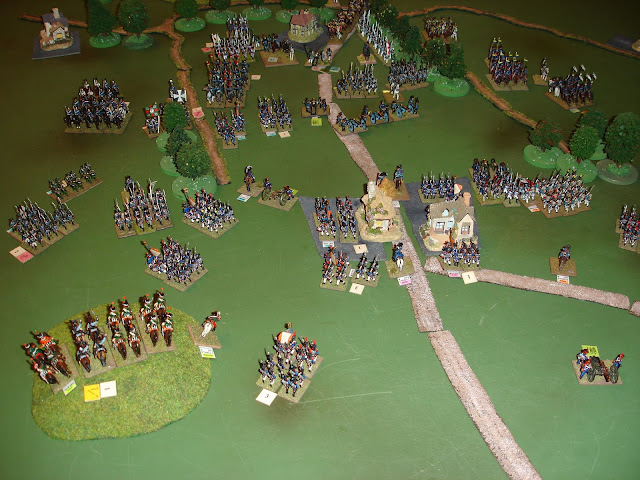 13:30 and the Prussians look stuck.
At this stage they have permanently lost three units
with more routed on table that they hope to recover.
(I use the optional 4th Edition self rally/command rules - it helps). 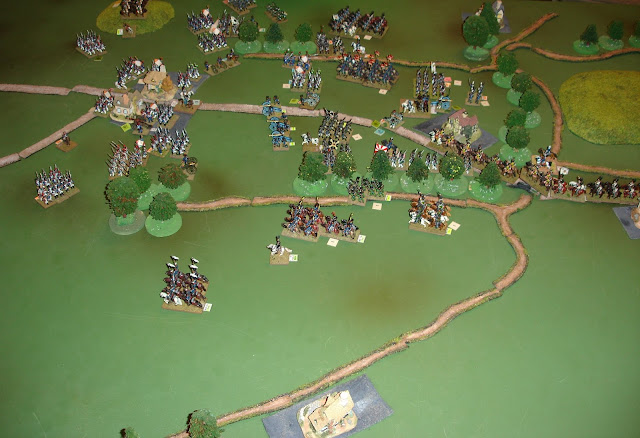 The French attack to the left of Hassenhausen has carried them well into the Prussian lines. 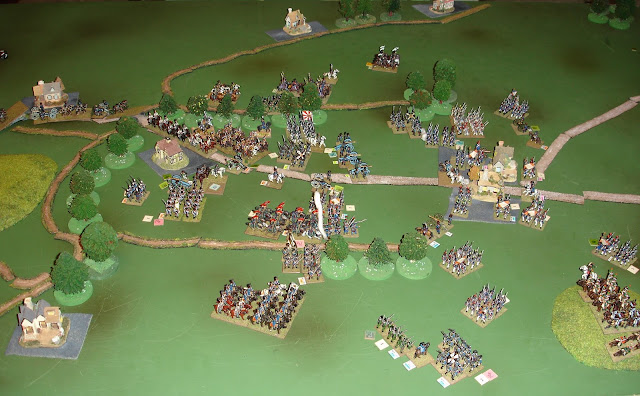 14:00 and the Prussians start another offensive, just as bad news starts to arrive from Jena.
(This has the effect of lowering the Prussian morale). 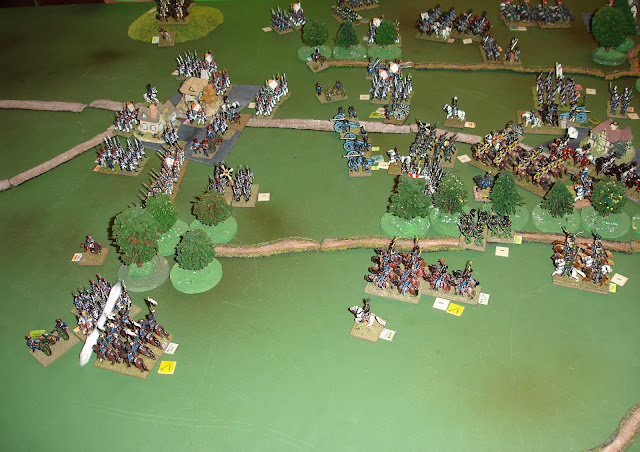 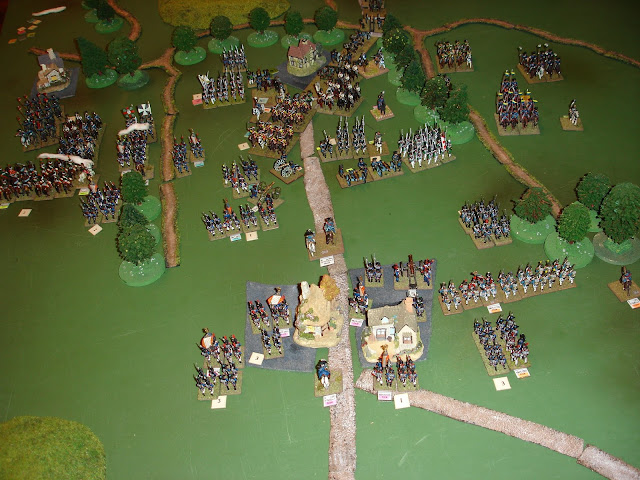 The attacks by the Prussian guards are driven off (the Guard being represented by some Russian grenadiers), but worse the French have started mopping up Prussian routed units and those close to dispersing, taking the permanent losses to six.  Come 15:00 this is fatal and the Prussian morale is irretrievably broken. 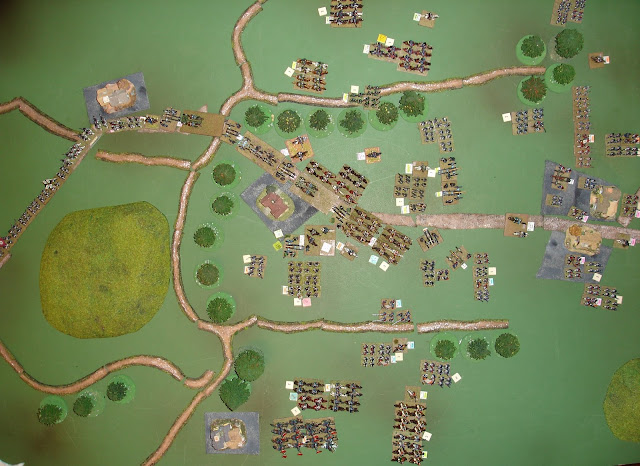 (All the more so as I have wasted time trying to get that last statement centred.  Grrr)

Perhaps not perfect, but a remarkably close historical result.  I was very pleased.  I had always thought this would be a real test to recreate using Napoleon's Battles and even though I had the scenario from the beginning, never thought to give it a try.  It probably would have stayed that way if I had not participated in the ANF's refight of the battle using their preferred (and modified) Shako rules.

Clearly I will have to arrange another game and make sure the French take two turns if they wish to deploy before marching on.  Perhaps I could also use the force march rule for the Prussians (as it was they had still not all arrived).  A bit more research on the terrain and the Prussian OOB wouldn't go astray either.

I have the F. Loraine Petre book on the 1806 campaign as well as the beautiful F.-G. Hourtoulle book and the amazing Pascal Bessonnet's Tactical Studies 1806, plus a pdf of a Thesis covering the battle by James Hallmark and some other sundry material.