The Boy's Book of Airfix 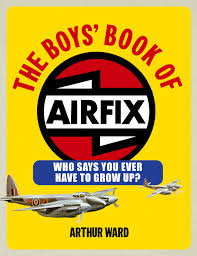 This book was lent to me by Julian of the ANF and filled the gap in my knowledge about what happened to Airfix, at least up to 2009 when it was published.  It also had me wallowing in nostalgia.

Now I have just found out that my local hobby shop, Stanbridges, is closing down its brick and mortar site.  So sad.

But reality is that I have not made a 1/72nd scale construction kit in a long while.  Certainly done lots of modelling, just not the traditional kits of my youth (and of which I still have a significant stockpile - something I thought I'd be doing in my retirement, but I seem to have been wrong, mostly).

The book is more about the changes in ownership (and there have been a lot) rather than the thought processes behind the various Airfix kits and figure ranges (although there is a bit about that).  There is also a bit of coverage of the production process, although it is an area that could possibly have been expanded on as it did seem to restrict what could be done (chiefly thickness of parts).

Airfix faded in my wargaming hobby pursuits due to first Matchbox, who produced some real quality kits and sets of figures, and then my move into 15mm Ancients, Napoleonics and ACW and most recently WW2.  I was still planning to do some 1/72nd scale WW2 stuff, but that is looking remote now (eg).  Pity, as I'd started to collect some rather good kit.  I also have my 1/72nd Airfix Roman and Ancient Briton DBA armies and then there are all my 1/72nd scale Napoleonic units.  Umm.

The problems of being a hoarder who can't let go.