I never realised that the annihilation of Army Group Centre 1944 was so dramatic and so quick. 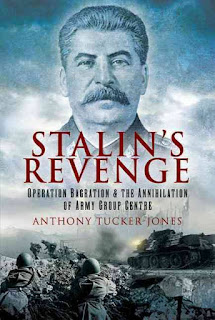 I picked up this book at the club while playing Stalingrad.  The donor seemed to think it was appropriate that I have it.  As an aside it is so sad that books are losing their value.

It is a short book, less than 200 pages, of which about 70 are appendices.  Strangely I read the appendices first, as they covered the weapons and OOB.  The included photos and maps provide context, although the maps don't always include the places mentioned in the text.  This is a minor point as it would be better reading it with some separate maps, perhaps even from a boardgame to get a good feel for things.

It is short on eye witness accounts (compared with the Beevor books for example), however I think this is understandable as most participants didn't survive the conflict.  The death toll was horrendous.

Again, some ideas for scenarios, or rather context to some of the generic breakout, encirclement, type games included with Blitzkrieg Commander and Rommel.

I did appreciate Tucker-Jones attempts to put the battle in a wider context as clearly it was a massive victory, but strangely not well covered/known (overshadowed by events in western Europe and then subsequently in Poland with the Warsaw uprising).  While Kursk and Stalingrad were tipping points, the Soviets still had a long way to go to have Stalin's revenge.  This battle sure provided that.