The club was down due to a power outage, but I was able to get Graham to come to my place so we could have our Impetus League Game.  This gave me the advantage of home turf which served me well.

The English had to deploy first, which gave me an advantage.

I started advancing right away, including spreading out.

By turn 2 we were in bow shot, with both sides scoring hits.

The English Hobilars (on my left) have routed after sustained missile fire.
On my right my elite light cavalry have engaged his knights.

Turn 4 and both units of English knights are in trouble.

With the enemy cavalry dispersed, my advance can now continue.

Turn 6 and we are closing in.

In the ensuing excitement I forgot to take photos, but it was all over pretty quickly.  The English longbow did some damage, and their foot followed up with a charge.  While it pushed my centre back, it failed to break them, leaving them exposed, particularly on my left, where I was able to make a flank charge. 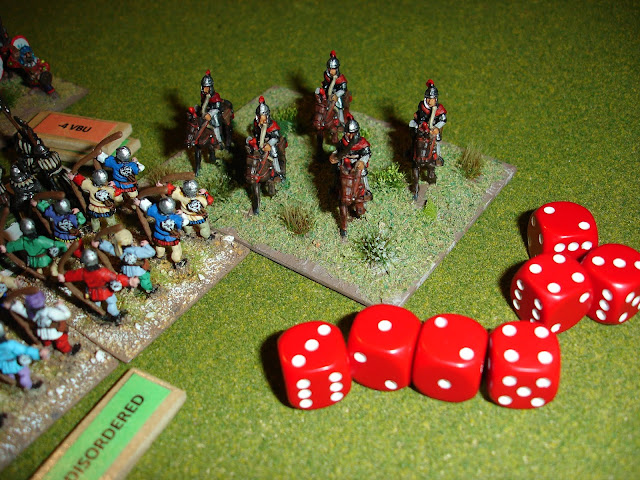 However that pathetic roll (need 6s or double 5s to score a hit), was just a minor embarrassment as my left hand legion (red tunics) smashed into the compromised English and they collapsed.  I was down two units (supporting archers - 4 points).  The English army was worth 22 points.
Posted by Sun of York at 10:12 AM