After my impulse buy of these second hand figures and then seeing that I could create a generic Byzantine army for Basic Impetus I got stuck into to tarting them up, focussing on flags, faces and bases.  They got to the 80% stage really quickly, but then I stalled with flocking the bases (I want more tufts) and flags.  The flags were sourced from images I found on the Internet and I had a few goes to size them to my liking.  They are still a work in progress and all detachable.

Major inspiration for this army came from one of Archduke Piccolo's blog posts.

Three units of Skoutatoi with their supporting archers,
an independent unit of archers and the Varangian mercenaries. 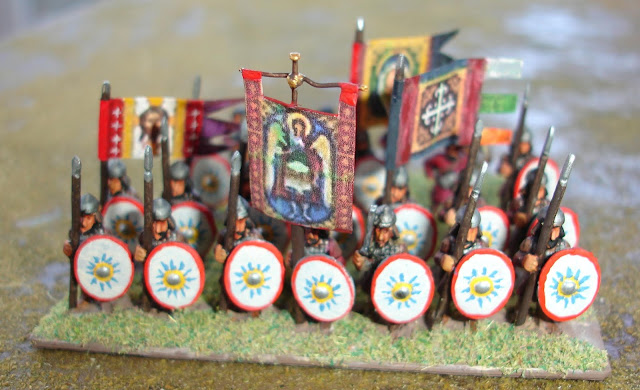 The main flag gave me a lot of grief and the other units are yet to receive theirs. 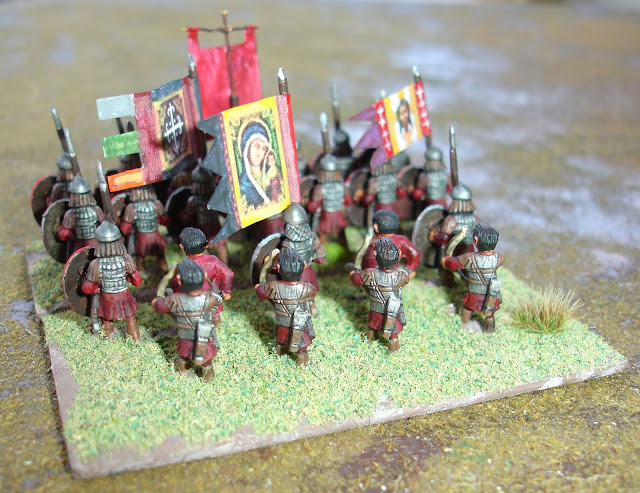 Perhaps a few more archers to pad out the base would have been good, but... nah. 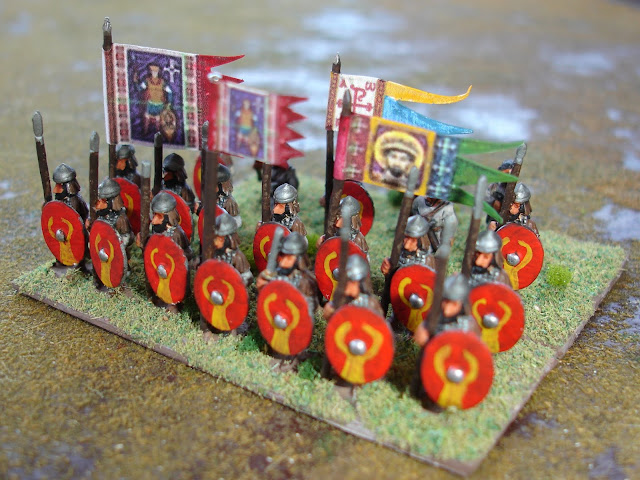 The front rank centre figure has had his spear replaced by a brass tube
which takes a flag mounted on a pin. 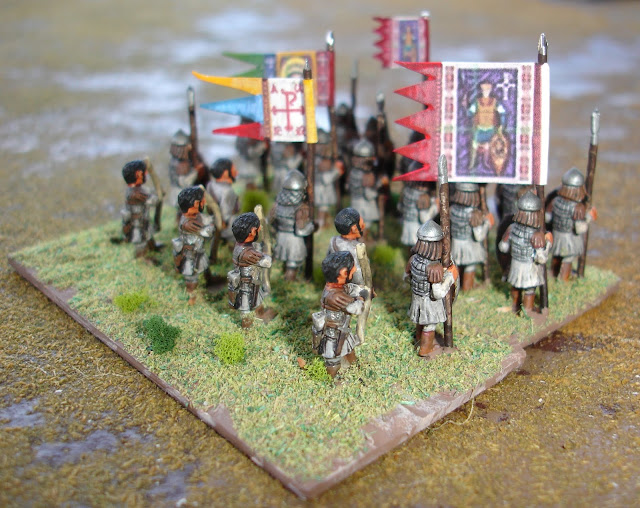 The other flags have been designed to slot over the existing spears.
There is not a lot of paint on these figures,
it is amazing what a wash can do (brown for flesh and black for everything else). 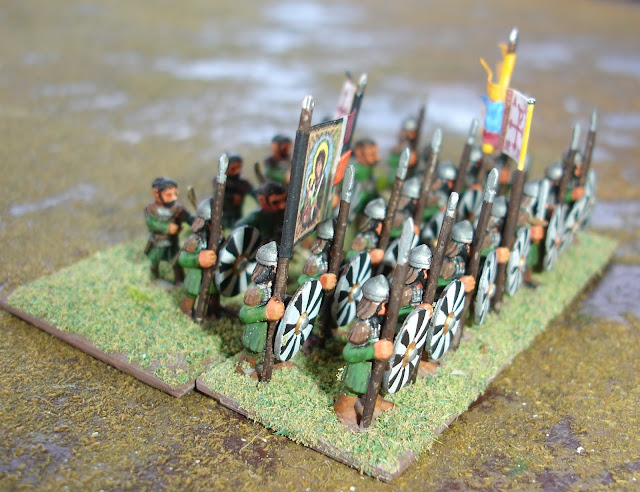 One uniform is red, another white and these guys are green.
There is no historical basis for this, it just seemed to happen. 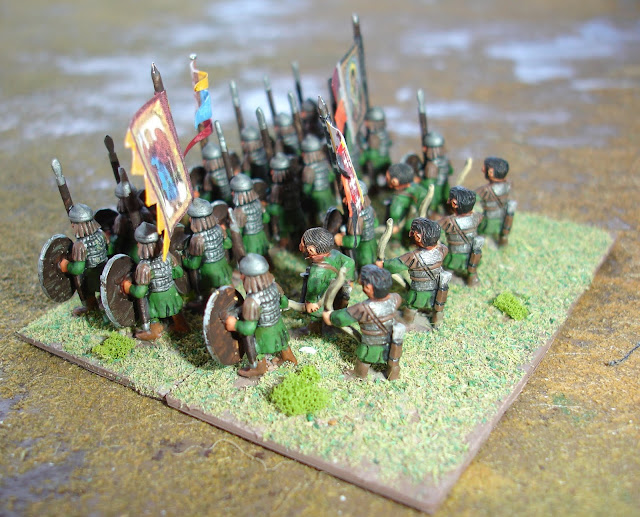 The third unit of Skoutatoi can only be fielded if the Varangians aren't used.

A bit sparse, but a few more tufts should do the trick. 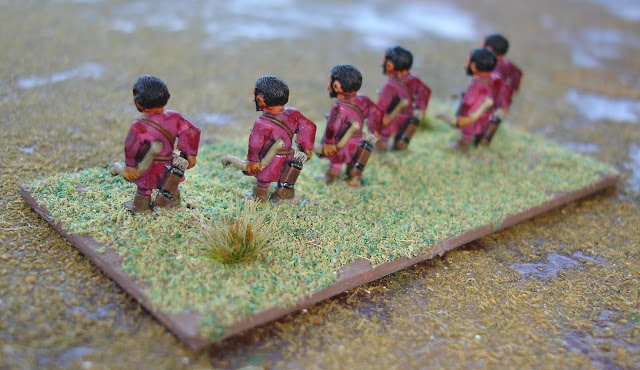 The archers, including the supporting archers are T troops in Impetus
and are mounted on a deeper base than the heavy foot.
This contributes to the sparseness (visual) problem I think.
However these guys only have a VBU (strength) of 3 and so looking a bit weak is actually okay. 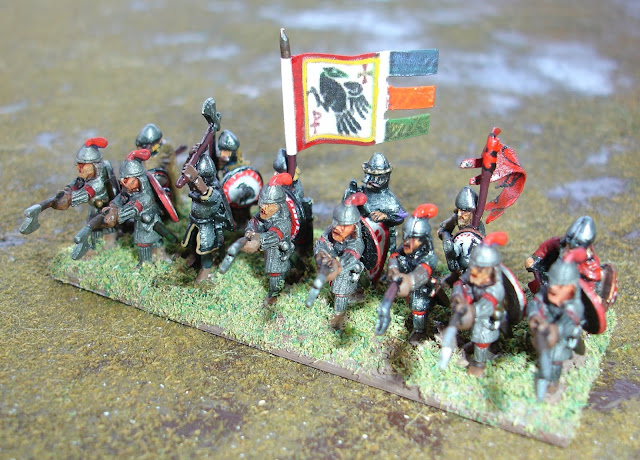 These are from figures rebased from my Dark Ages army that were providing my Viking forces, along with some figures given to me by Archduke Piccolo. 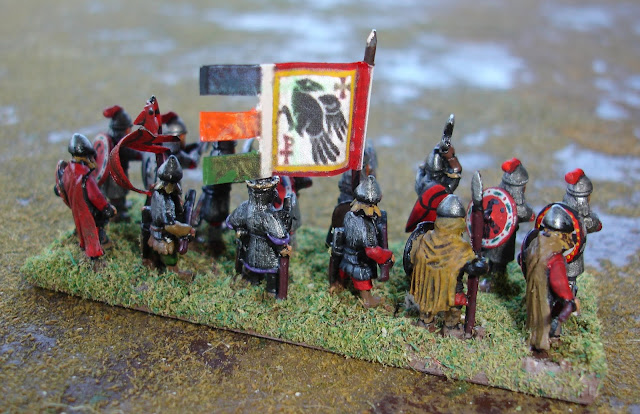 Now to get on with the cavalry!