Since doing an impromptu game based on the Battle of Ligny back in June for an NWS Games Day to entice James down from York, the battle, and getting it "just right" for Napoleon's Battles has become a bit of an obsession.

Today I staged what I hope is the culmination of this endeavour.  James from the ANF took the role of Vandamme, Mark B Gerard, Stephen N von Zieten and Stephen B von Pirch.  Mark B also had the Guard.  I umpired and interfered.

The Prussian deployment, the village of Ligny is the four buildings top right. 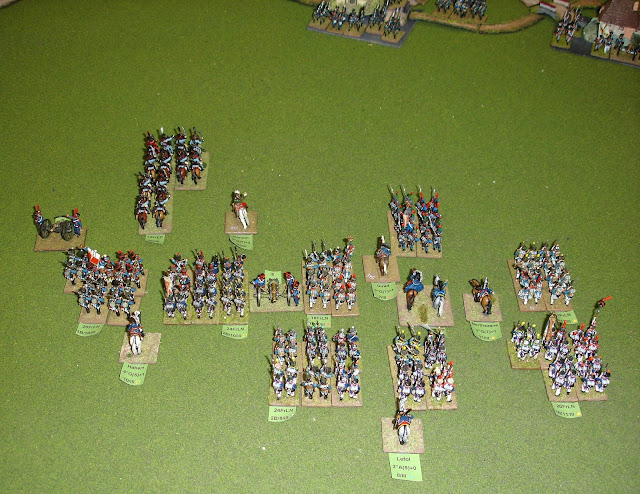 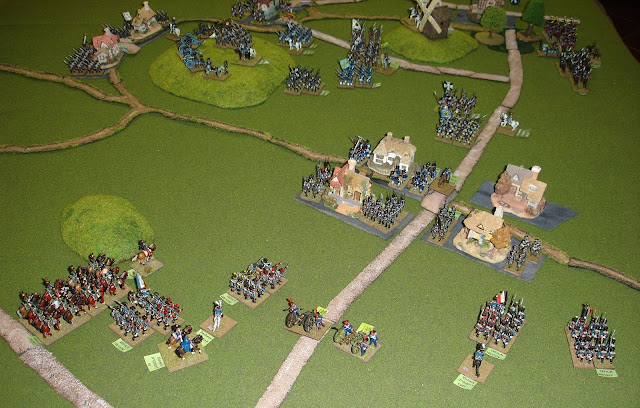 Gerard's IV Corps gets into immediate action against the Prussians in Ligny at 14:00 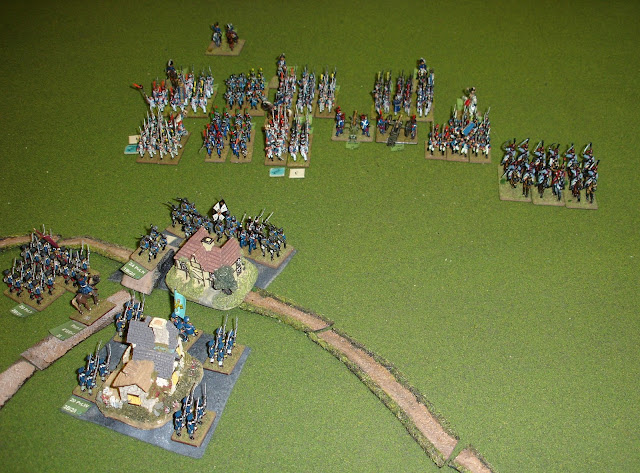 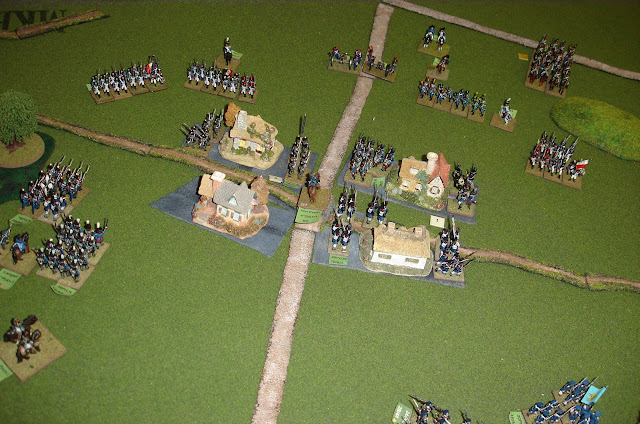 Ligny village as seen from the Prussian side.
This is the end of the 14:30 turn and the Prussian 8 Brigade has been brought on
(left hand side of picture) 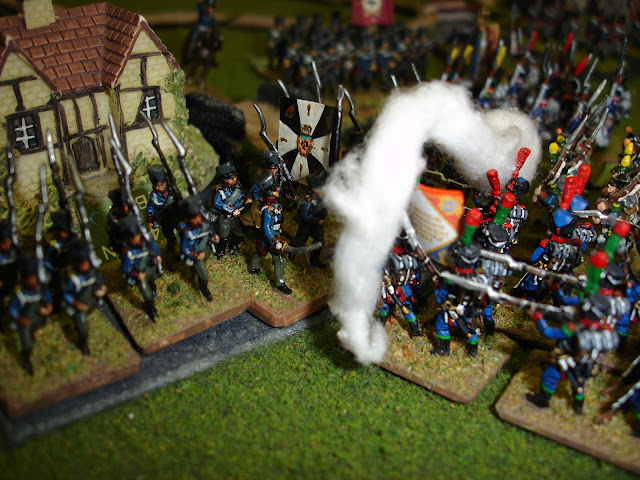 15:00 and Vandamme launches a double assault on Wagnelee and Le Hameau. 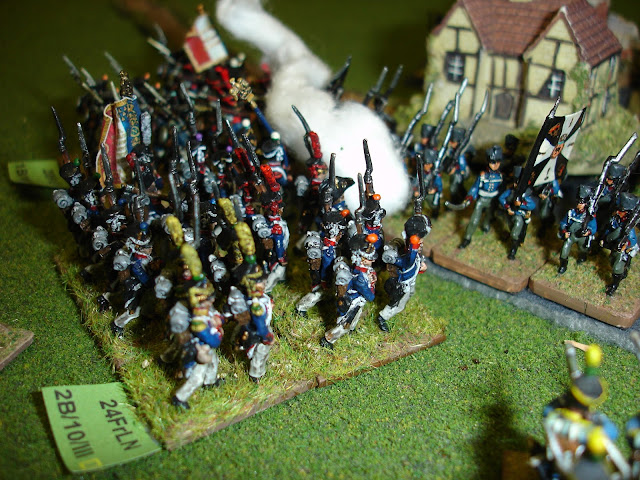 The attacks were lead by Girad and Berthezene and ended in disaster with both generals captured. 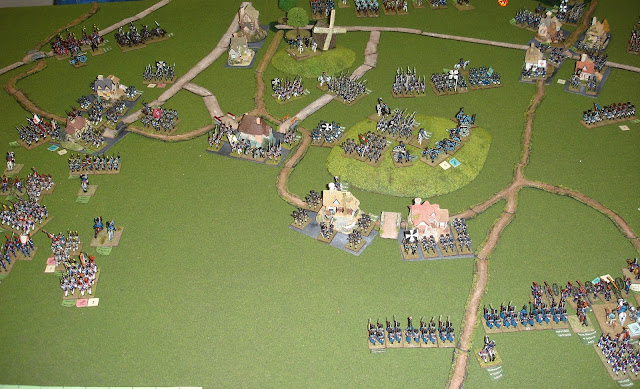 The 15:00 turn also saw the arrival of Napoleon and the Guard,
lower right hand corner. 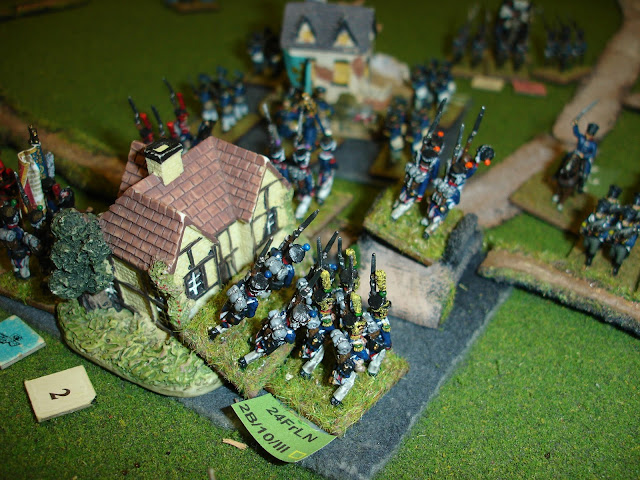 Vandamme launches another attack and this time meets with success,
the Prussians became disordered and had to withdraw. 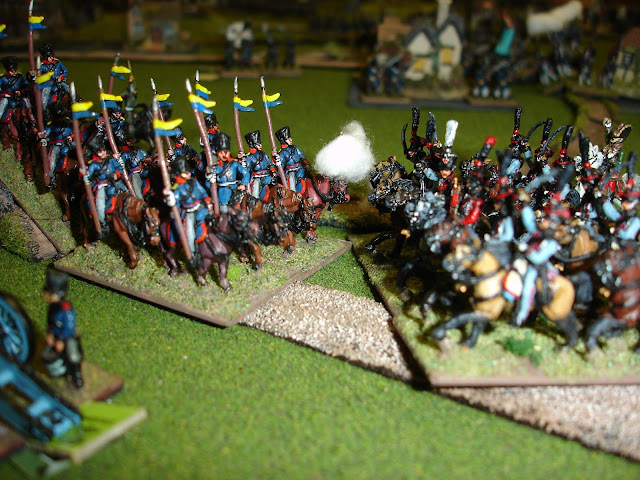 At the same time Domon lead the 3rd Cavalry Division against some Prussians that had attempted to cross over the Ligne Brook using the old Roman road and threaten the French left flank.
The Prussians were soundly beaten losing their battery as well. 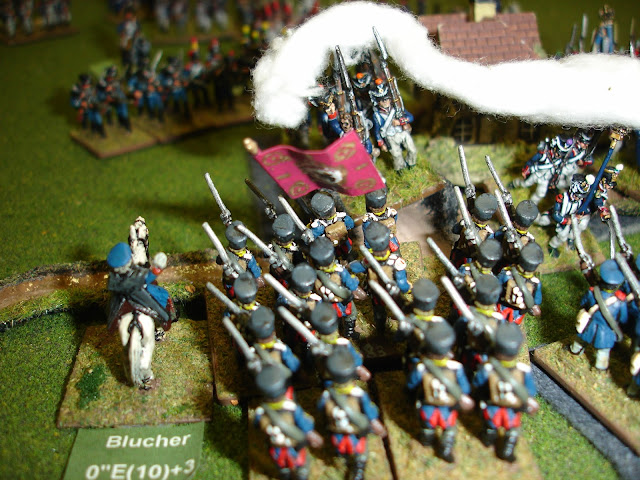 The battlefield as seen from the French left at the end of the 15:30 turn. 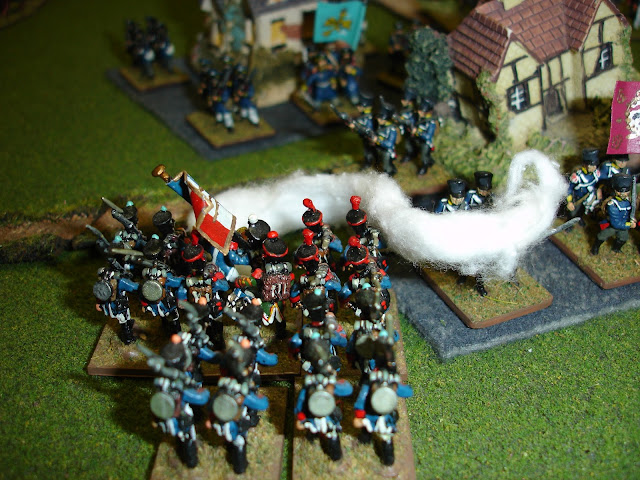 Vandamme launches yet another attack on Wagnelee and Le Hameau. 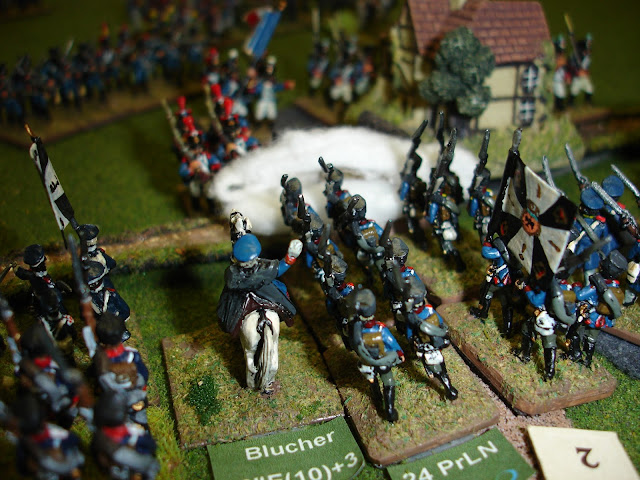 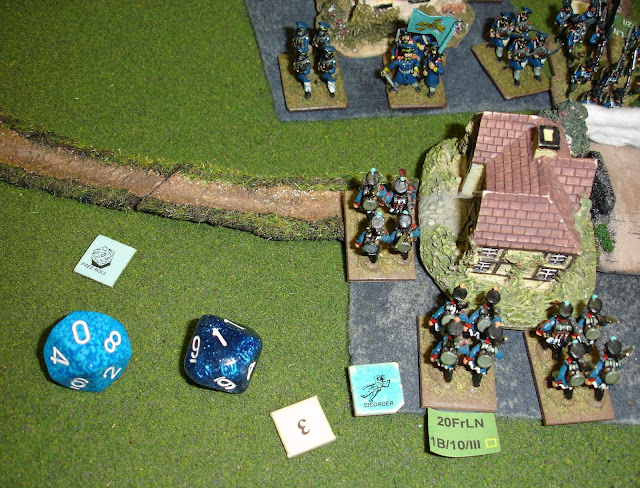 The French momentarily hold Wagnelee and Le Hameau,
but the Prussians use a reroll and retake the village. 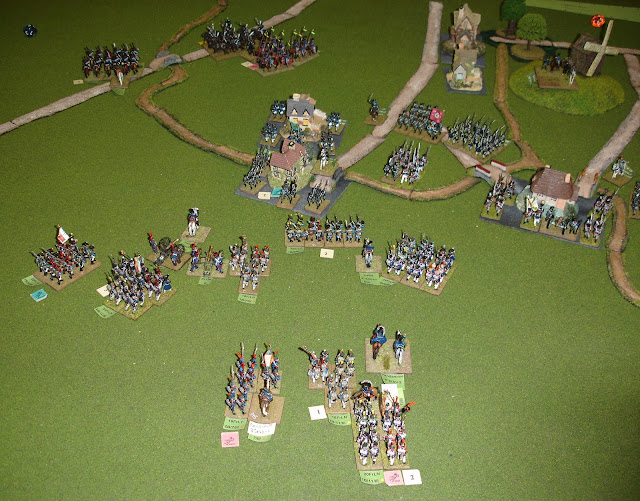 The French left at the end of the 16:00 turn.
The troops repulsed in the first attack are being rallied by replacement commanders
of the 7th and 11th Divisions. 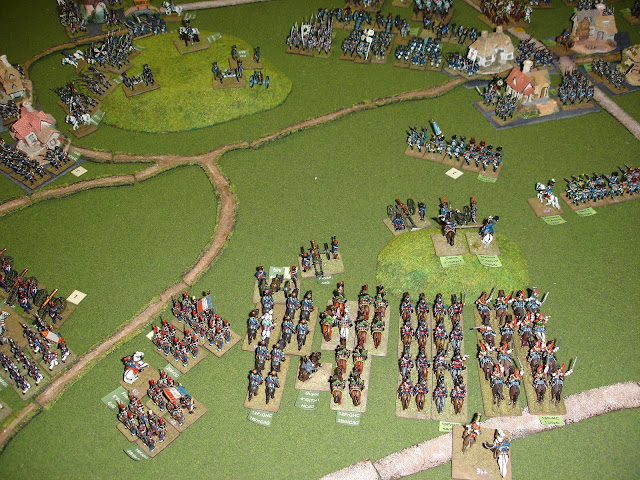 On the right a massive artillery duel is underway which the French are slowly winning. 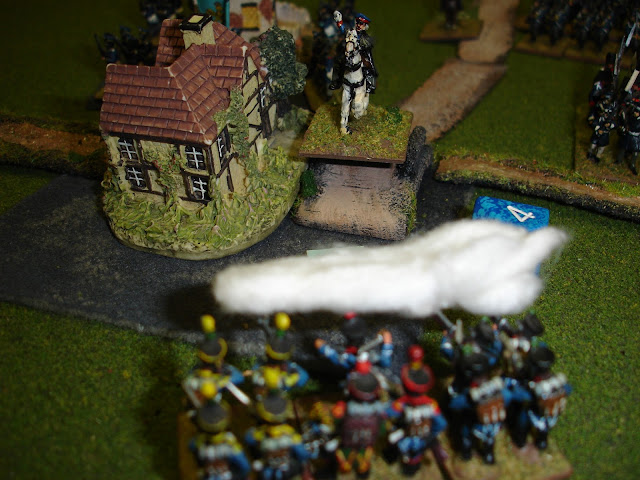 Disaster strikes the Prussians in Wagnelee and Le Hameau when they are dispersed,
by concentrated long range artillery and skirmisher fire.
This allows a weakened French attack to succeed and
Blucher, desperately trying to defend the village is wounded.
Luckily it is just a flesh wound and he goes off to get some gin to treat the injury. 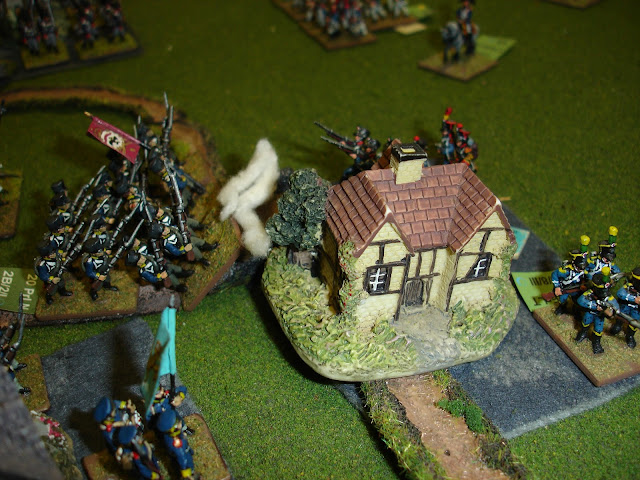 The Prussians launch yet another counterattack to recapture Wagnelee and Le Hameau. 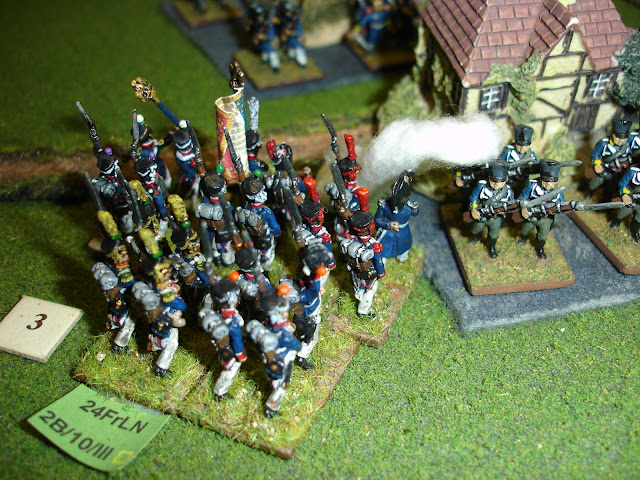 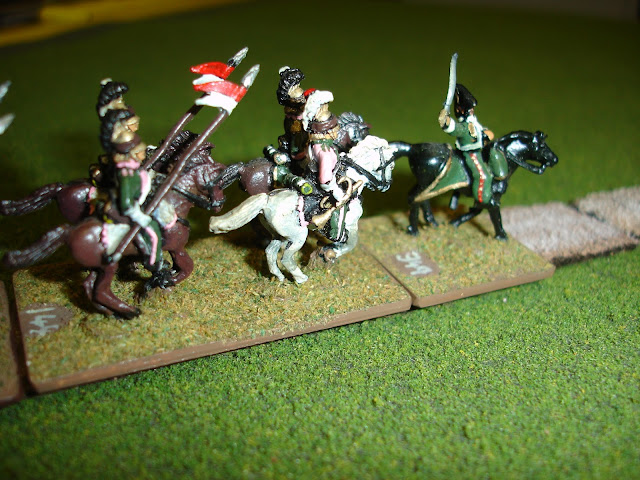 In a bit of luck reinforcements arrive in the form of Jacquinot's cavalry and Durette's division from D'Erlon Corps.  This avoided panic in the French army upon seeing "dark masses in the west". 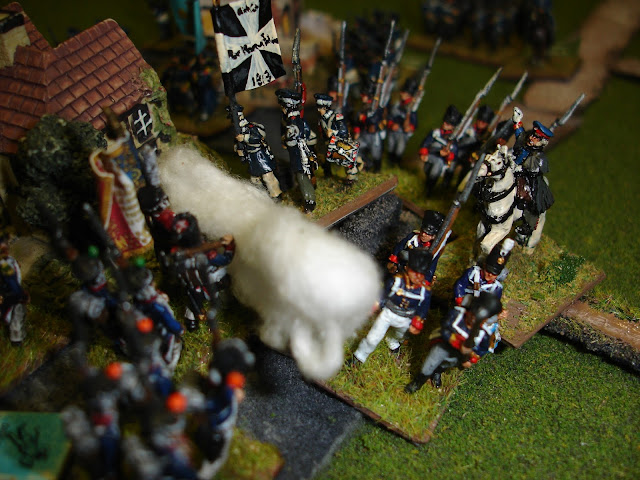 With his wounds dressed Blucher is back to retake Wagnelee and Le Hameau. 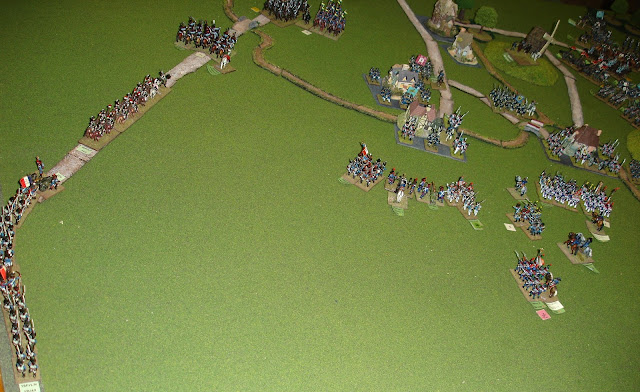 The French left at the end of 17:00.
Vandamme has suffered over 25% casualties and
failed to secure any of the villages upstream of Ligny. 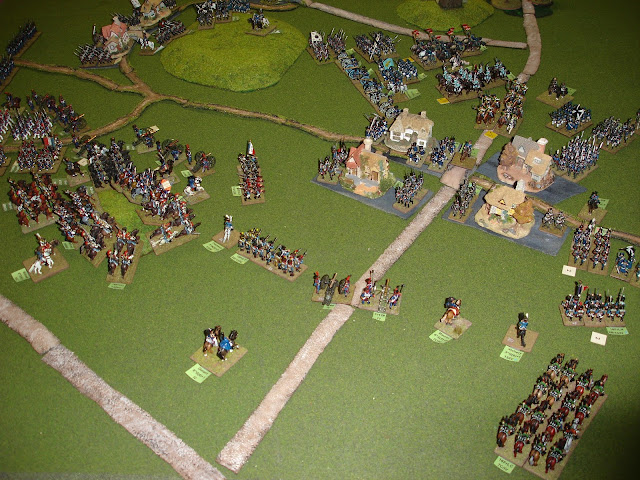 Gerard has suffered the same and failed to get close to Ligny.

The French success in the artillery duel maybe short lived as the artillery of the II Korps has been brought up.  At least Napoleon still has the Guard.

The fighting for Wagnelee and Le Hameau has been exactly as desired.  This BUA more represents the farm of Le Hameau than Wagnelee which is more properly the other BUA on the other side of the stream.

The rules for the stream requires that infantry and cavalry only can cross it and then only in column.  My thinking is that cavalry in line should be able to cross.  With Napoleon's Battles infantry in line represent a deployed posture, but that concept doesn't apply to cavalry in line (who have almost the same movement factor).  What makes it hard for cavalry to cross is the depth of their formation.  At 3 to 1 movement penalty for rough terrain, and a depth of 4" crossing a 1" obstacle, 15" of movement is required.  All except LC already on the edge of the obstacle would take two turns to cross it.  Being in line only takes 9" of movement.  My thinking is that column formation represents cavalry ready to react (they get a slight movement increase but reduced fighting ability) while being in line represents them making a determined attacking.  Conceptually that is okay, but they is always a challenge with the physical space a unit takes up.

There are two aspects to the Ligny brook or streamlet.  One is how it is depicted in the scenario and its associated effect.  The other is the attitude of a unit as it engages with the terrain feature.

As a slight digression I Googled "Ligny stream" hoping to come across lots of photos etc, but apart from the embarrassment of seeing some of my own posts, I found this: 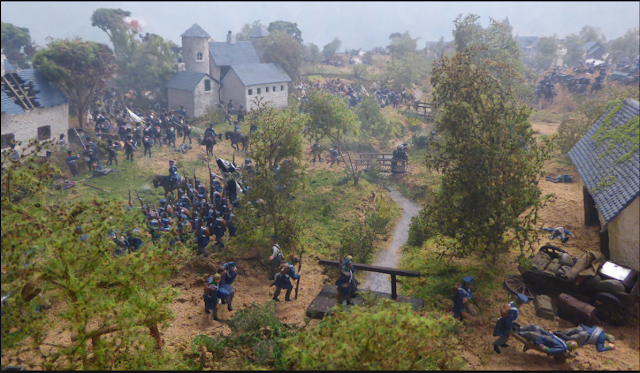 More detail than I could ever hope to deliver on the table top.  Magnificent 1/72nd scale diorama of the Battle of Ligny. Brilliant! 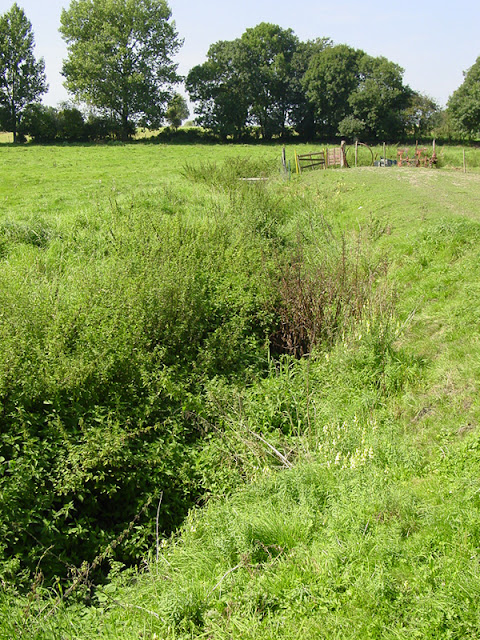 The brook as it is today and the author notes that Hofschröer wrote: "The brook itself was only one or two meters wide, but the valley and its marshy terrain presented a formidable obstacle..." That maybe, but looking at contemporary maps there were many roads, trails etc that crossed the brook and in my limited readings it has not been presented as significant, particularly compared with the composition of the components making up the village areas.

At one or two metres the stream on the table top would be less than a tenth of an inch.  Making it an inch provides 100 yards of rough going (although it is really the depth of the unit that causes the problem.

My next task is to read up a bit about cavalry brigade formations, but I am thinking that for this game a cavalry unit in line can cross the same as one in column.  You just have to love the challenge of semantics and unit depictions in wargames!
Posted by Sun of York at 10:53 AM