A bit of learning

I'd read a post recently which had mentioned this book The Ancient Fleets: The Story of Naval Warfare Under Oars by John Van Duyn Southworth as being a good reference.  I looked to get a copy and it was on Amazon for $10.  Good buy I thought, even though I knew it was US dollars.

Then I saw the postage...

Well, it would probably still be a decent buy given you can easily pay $50 for such a book here, but with Mr Trump as the face of America I though nah, let's look for other options.

A search of my local library online system produced gold. 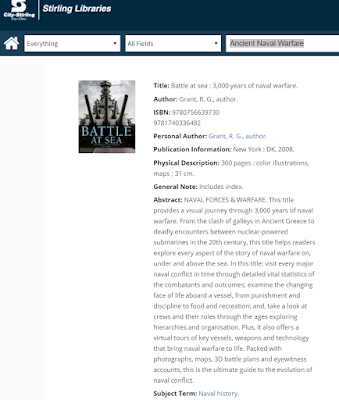 So, saved $50 and will have a reference book in a few days (it's on hold and will be delivered to my closest branch for me to pick up).  Better still, when I'm done with it I can return it to the library for them to look after.


I also thought to do a bit of searching on the Internet, specifically Wikipedia.  It has provided me with the basics which I include here from https://en.wikipedia.org/wiki/Galley_tactics:


Introduction of the ram 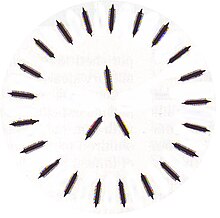 A schematic reconstruction of a defensive circle of galleys seen from above.
Around the 8th century BC, ramming began to be employed as war galleys were equipped with heavy bronze rams. Records of the Persian Wars in the early 5th century BC by the Ancient historian Herodotus (c. 484-425 BC) show that by this time ramming tactics had evolved among the Greeks. The formations could either be in columns in line ahead, one ship following the next, or in a line abreast, with the ships side by side, depending on the tactical situation and the surrounding geography. There were two primary methods for attack: by breaking through the enemy formation (diekplous) or by outflanking it (periplous). The diekplous involved a concentrated charge in line ahead so as to break a hole in the enemy line, allowing galleys to break through and then wheel to attack the enemy line from behind. The periplous involved outflanking or encircling the enemy so as to attack them in the vulnerable rear or side by line abreast.[2] If one side knew that it had slower ships, a common tactic was to form a circle with the bows pointing outwards, thereby avoiding being outflanked. At a given signal, the circle could then fan out in all directions, trying to pick off individual enemy ships. To counter this formation, the attacking side would rapidly circle, feigning attacks in order to find gaps in the formation to exploit.
Ramming itself was done by smashing into the rear or side of an enemy ship, punching a hole in the planking. This did not actually sink an ancient galley unless it was heavily laden with cargo and stores. With a normal load, it was buoyant enough to float even with a breached hull. It could also maneuver for some time as long as the oarsmen were not incapacitated, but would gradually lose mobility and become unstable as it flooded. The winning side would then attempt to tow away the swamped hulks as prizes. Breaking the enemy's oars was another way of rendering ships immobile, rendering them into easier targets. If ramming was not possible or successful, the on-board complement of soldiers would attempt to board and capture the enemy vessel by attaching to it with grappling irons. Accompanied by missile fire, either with bow and arrow or javelins. Trying to set the enemy ship on fire by hurling incendiary missiles or by pouring the content of fire pots attached to long handles is thought to have been used, especially since smoke below decks would easily disable rowers.
The speed necessary for a successful impact depended on the angle of attack; the greater the angle, the lesser the speed required. At 60 degrees, 4 knots was enough to penetrate the hull, but this increased to 8 knots at 30 degrees. If the target for some reason was in motion towards the attacker, less speed was required, especially if the hit came amidships. War galleys gradually began to develop heavier hulls with reinforcing beams at the waterline, where a ram would most likely hit. There are records of a counter-tactic to this used by Rhodian ship commanders where they would angle down their bows to hit the enemy below the reinforced waterline belt. Besides ramming, breaking enemy oars was also a way to impede mobility and make it easier to drive home a successful ramming attack.[5]

Despite the attempts to counter increasingly heavy ships, ramming tactics were superseded in the last centuries BC by the Macedonians and Romans who were primarily land-based powers. Hand-to-hand fighting with large complements of heavy infantry supported by ship-borne catapults dominated the fighting style during the Roman era, a move that was accompanied by the conversion to heavier ships with larger rowing complements and more men per oar. Though effectively lowering mobility, it meant that less skill was required from individual oarsmen. Fleets thereby became less dependent on rowers with a lifetime of experience at the oar.
In fact success in ramming depended so much on a combination of skill and good fortune that it played a somewhat subordinate part in most ancient sea fights. The Romans baffled the ramming tactics of the Carthaginians by the invention of the corva, or crow, a plank with a spike for hooking onto enemy ships which grappled the prow of the rammer, and provided a gangway for boarders. It's not certain whether the weight of this weapon destabilized Roman ships and led to whole fleets being lost in storms. The Romans did continue their boarding tactics in the naval battles of the Punic Wars, but are also reported as ramming the Carthaginian vessels after the abandonment of the corvus. An older and alternative way for boarding was the use of grappling hooks and planks, also a more flexible system than the corvus. Agrippa introduced a weapon with a function similar to the corvus, the harpax.

This entry, https://en.wikipedia.org/wiki/Hellenistic-era_warships, also provides an explanation of the various ship types: