Almost there, I am just two figures short and they are currently undercoated ready to paint. 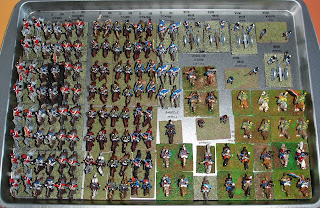 The cavalry.  The assembled miniatures are not as homogeneous as those in the other collections I have used.  The Dutch-Belgians and Brunswick troops are uniformed correctly (as far as that is possible), but basing is totally different (generally two figures rather than four).  Seems to work okay for infantry, but cavalry is a bit out. 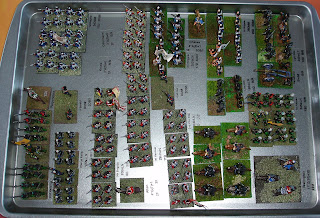 Brunswick, Picton and Alten and the missing figures. 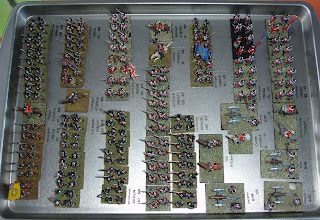 The rest.  Some of the figures are based on inch frontage bases which are part of the rule's basing system for troops in two rank lines, although my personal opinion is that was a wrong move and probably done to accommodate other basing schemes.  I raised this with the author once and while he was adamant, I wasn't satisfied.  Doesn't matter except for the most pedantic/discerning/calculating of players.

Some of these troops maybe be upgraded on the day depending on what new troops/figures show up.  I've already seen the replacement Picton and Uxbridge.