Lovely rainy weather, great for practicing some Waterloo options with Napoleon's Battles ahead of the big day which is less than four weeks away now.

Mark B took the French I Corps and IV Calvary Corps and attacked Picton's Division and the 2nd Dutch-Belgian Division, which were supported by the Dutch Belgian cavalry division, the Brunswick division (which saw no action), some British light cavalry, the Hanoverian cavalry and a few extra troops (I'm still mustering the allied forces). 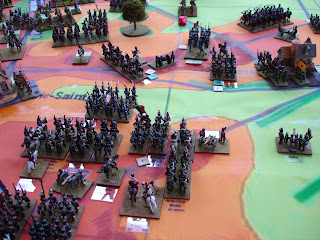 One of Picton's brigades is holding La Haye Sainte and was left well alone.  The other two came in for some rough treatment and routed.  The French held the ridge. 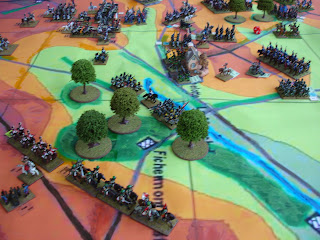 Jacquinot and Durutte attempt to cross the Smohain Brook (or is it a stream?)  Fording takes time even with a bridge and Wellington saw it coming and was able to interrupt their progress, even though the British cavalry ended up recklessly charging off to meet the Prussians. 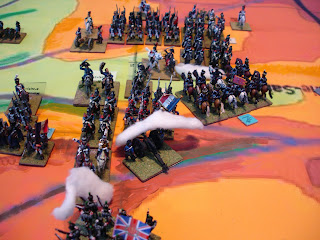 Allied counterattacks re took the ridge.

Even though we were just having some practice we still had an interesting time, with lots of indecision about the best course of action.  We played five or six turns and it was proving hard going for the French.